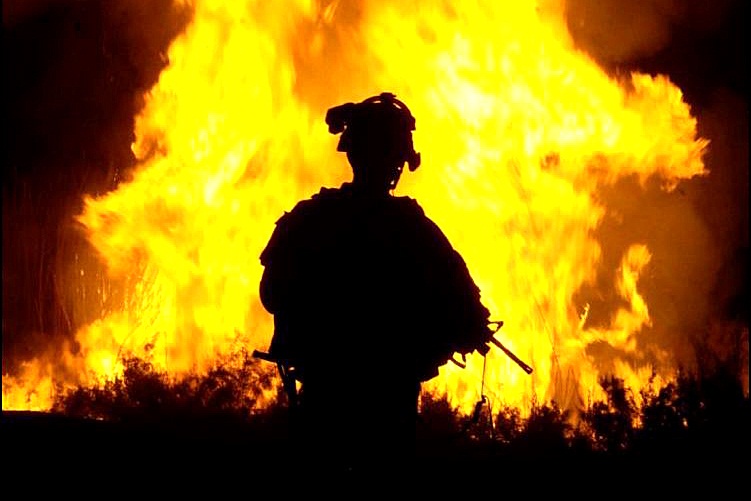 The rise of ISIS and the fall of Mosul have laid bare the central contradiction's in Washington's failed "war on terror." (Photo: U.S. Army / Flickr)

The Obama administration wants a rubber stamp on its unwise, unlimited, and unauthorized new war in the Middle East. It shouldn't get it.
By Peter Certo | February 11, 2015

At long last, the Obama administration has submitted a draft resolution to Congress that would authorize the ongoing U.S.-led military intervention against the Islamic State, or ISIS.

The effort comes more than six months after the U.S. began bombing targets in Iraq and Syria. Since then, some 3,000 U.S. troops have been ordered to Iraq, and coalition air forces have carried out over 2,000 bombing runs on both sides of the border.

Better late than never? Maybe not.

The language proposed by the White House would authorize the president to deploy the U.S. military against the Islamic State and “associated persons or forces” for a period of three years, at which point the authorization would have to be renewed.

In an attempt to reassure members of Congress wary of signing off on another full-scale war in the Middle East, the authorization would supposedly prohibit the use of American soldiers in “enduring offensive ground combat operations.” It would also repeal the authorization that President George W. Bush used to invade Iraq back in 2002.

The New York Times describes the draft authorization as “a compromise to ease concerns of members in both noninterventionist and interventionist camps: those who believe the use of ground forces should be explicitly forbidden, and those who do not want to hamstring the commander in chief.”

As an ardent supporter of “hamstringing the commander in chief” in this particular case, let me count the ways that my concerns have not been eased by this resolution.

1. Its vague wording will almost certainly be abused.

For one thing, the administration has couched its limitations on the use of ground forces in some curiously porous language.

How long is an “enduring” engagement, for example? A week? A year? The full three years of the authorization and beyond?

And what’s an “offensive” operation if not one that involves invading another country? The resolution’s introduction claims outright that U.S. strikes against ISIS are justified by America’s “inherent right of individual and collective self-defense.” If Obama considers the whole war “inherently defensive,” does the proscription against “offensive” operations even apply?

And what counts as “combat”? In his last State of the Union address, Obama proclaimed that “our combat mission in Afghanistan is over.” But only two months earlier, he’d quietly extended the mission of nearly 10,000 U.S. troops in the country for at least another year. So the word seems meaningless.

In short, the limitation on ground troops is no limitation at all. “What they have in mind,” said California Democrat Adam Schiff, “is still fairly broad and subject to such wide interpretation that it could be used in almost any context.”

Any context? Yep. Because it’s not just the ISIS heartland we’re talking about.

2. It would authorize war anywhere on the planet.

For the past six months, we’ve been dropping bombs on Iraq and Syria. But the draft resolution doesn’t limit the authorization to those two countries. Indeed, the text makes no mention of any geographic limitations at all.

That could set the United States up for war in a huge swath of the Middle East. Immediate targets would likely include Jordan or Lebanon, where ISIS forces have hovered on the periphery and occasionally launched cross-border incursions. But it could also rope in countries like Libya or Yemen, where ISIS knockoff groups that don’t necessarily have any connection to the fighters in Iraq and Syria have set up shop.

This is no theoretical concern. The Obama administration has used Congress’ post-9/11 war authorization — which specifically targeted only the perpetrators of the 9/11 attacks and their patrons and supporters — to target a broad array of nominally “associated forces” in a stretch of the globe reaching from Somalia to the Philippines.

In fact, the administration has used the very same 2001 resolution to justify its current intervention in Iraq and Syria — the very war this new resolution is supposed to be authorizing.

How does the new resolution handle that?

3. It leaves the post-9/11 “endless war” authorization in place.

Yep. That means that even if Congress rejects his ISIS resolution, Obama could still claim the authority to bomb Iraq and Syria (not to mention Lebanon, Jordan, Yemen, Libya, and beyond) based on the older law.

It also means that if Congress does vote for the war but refuses to reauthorize it three years from now, some future president could fall back on the prior resolution as well.

Obama is explicit about this point. In his accompanying letter to Congress, the president claims that “existing statutes provide me with the authority I need to take these actions” against ISIS.

Yes, you read that right: Obama claims he doesn’t even need the authority he’s writing to Congress to request. And he’s saying so in the very letter in which he requests it.

So what does that say about this authorization?

Obama says that the war resolution is necessary to “show the world we are united in our resolve to counter the threat posed by” ISIS. Secretary of State John Kerry added in a statement that an authorization would send “a clear and powerful signal to the American people, to our allies, and to our enemies.”

But as any kid who’s taken middle school civics could tell you, the point of a war resolution is not to “show the world” anything, or “send a signal” to anyone.

The point is to encourage an open debate about how the United States behaves in the world and what acts of violence are committed in our name. Most importantly, it’s supposed to give the people’s representatives (such as they are) a chance to say no. Without that, it’s little more than an imperial farce.

Which is a shame. Because an empty shadow play about the scope of the latest war leaves out one crucial perspective…

5. War is not going to stop the spread of ISIS.

ISIS has flourished almost entirely because of political breakdown on both sides of the Iraq-Syria border. That breakdown has been driven by a mess of factors — local sectarian tensions and a brutal civil war in Syria, assuredly, but also the catastrophic U.S. invasion of Iraq, ongoing U.S. support for a sectarian government in Baghdad that has deeply alienated millions of Sunnis, and helter-skelter funding for a variety of Syrian rebel groups by Washington and its allies.

Military intervention fixes precisely none of these problems, and indeed it repeats many of the same calamitous errors that helped to create them. A better strategy might focus on humanitarian assistance, strictly conditioned aid, and renewed diplomatic efforts to secure a ceasefire and power-sharing agreement in Syria, equal rights for minority populations in Iraq, and a regional arms embargo among the foreign powers fueling the conflict from all sides.

But as Sarah Lazare writes for Foreign Policy In Focus, saying yes to any of those things requires saying no to war. That means not just rejecting the ISIS authorization the administration wants now, but also the 2001 law it’s used to justify the war so far.

If you feel similarly, I’d encourage you to write your member of Congress immediately and let them hear it: No more rubber stamps. No more shadow play.