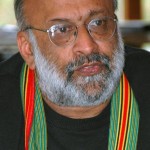 Firoze Manji, a Kenyan, is the founder and former editor-in-chief of Pambazuka News, (www.pambazuka.org) and Pambazuka Press (www.pambazukapress.org). He was the founder and former executive director (1997-2010) of Fahamu – Networks for Social Justice (www.fahamu.org). He has published widely on health, social policy, human rights and political sciences, and authored and edited a wide range of books on social justice in Africa, including on women’s rights, trade justice, on China’s role in Africa and on the recent uprisings in Africa. He is a member of the International Advisory Board of the Centre for the Study of Global Media and Democracy, Goldsmiths College, University of London. He is a Fellow of the Royal Society for the Arts and is Visiting Fellow at Kellogg College, University of Oxford.

In an interview with Basta! at the World Social Forum, Firoze Manji discusses the problems of the 'aid industry.'