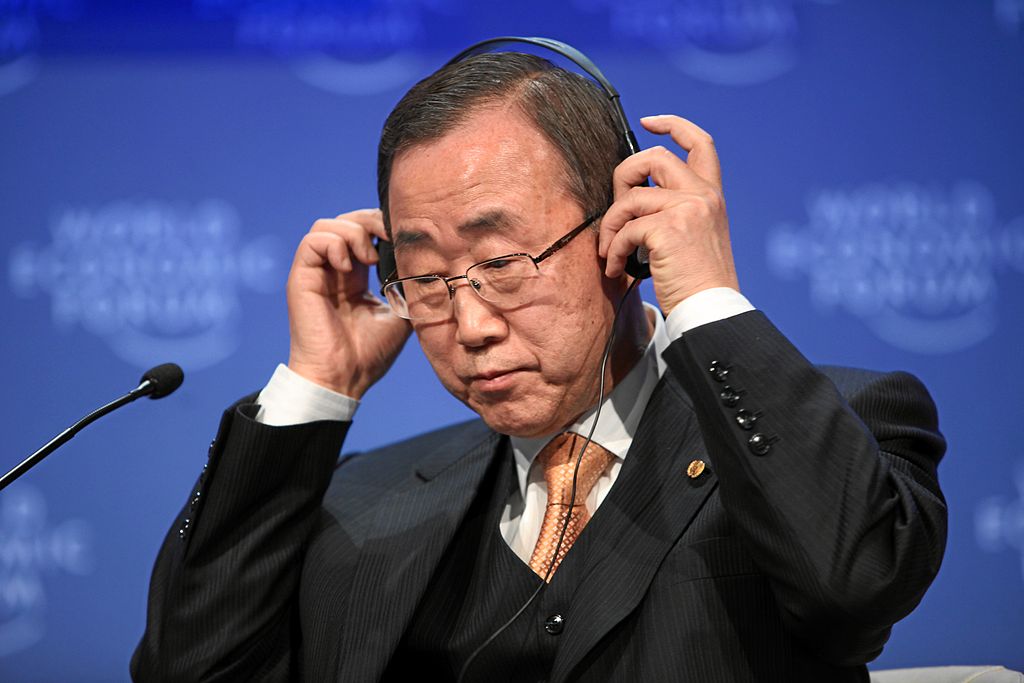 Can the UN secretary-general's ill-advised trip to North Africa nevertheless pave the way to a settlement of the dispute over Western Sahara?
By Anna Theofilopoulou | March 28, 2016

The conflict over Western Sahara has lasted well over 40 years, 25 of those under UN Security Council oversight. The peace process has just suffered the latest of many setbacks. This time, Secretary-General Ban Ki-moon undertook an ill-advised visit to North Africa, which did not include Morocco, the key player in the conflict. Instead of energizing the stalled talks over Western Sahara as he intended, the secretary-general’s visit likely put them in a deep freeze until his successor takes office.

The new crisis on Western Sahara could have been avoided. The secretary-general and those advising him should have taken a closer look at the history of the Security Council’s handling of the conflict since the Council first became involved in 1991. I should know. I covered this issue for 12 years while working in the UN, and I continue to follow developments in Western Sahara with increasing alarm. In my final seven years at the UN, I was part of the negotiating team and advisor to former US Secretary of State James Baker, who was Kofi Annan’s first personal envoy to Western Sahara from 1997 to 2004. It was during Baker’s tenure that the UN came the closest to resolving this conflict in 2003. It has been downhill ever since.

This month, Ban decided to visit the region in an effort to resolve the conflict before the end of his term this December. And he made the trip, despite Morocco’s repeated claims that it could not receive him due to the absence of King Mohammed VI on any of the different dates proposed by the secretary-general. But if, as his spokesman claimed, Morocco blocked his visit to the territory by denying landing clearance for his plane, this is unprecedented and an affront to the office of the secretary-general, given that his predecessors Kofi Annan and Boutros Boutros-Ghali had visited the territory.

Equally unprecedented was the secretary-general’s decision to meet with only the other party to the conflict, the pro-independence Polisario Front, a liberation movement representing the Saharan people in the UN original Settlement Plan to resolve the Western Sahara conflict. He also met with the neighboring states of Mauritania and Algeria, the latter a key supporter of Polisario. While in Algiers, the secretary-general described Morocco’s presence in Western Sahara as an “occupation,” a term that predictably enraged Morocco’s government, press, political parties, and public enough that it provoked a retraction from the secretary-general’s office.

In another unprecedented move, the secretary-general also visited the eastern sliver of Western Sahara nominally controlled by Polisario, a no-mans-land created by Morocco’s massive defensive wall that divides the territory. Although ostensibly there to visit a UN peacekeeping site, the Secretary-General also visited the provisional capital of Polisario’s government-in-exile in Bir Lahlou, a move that could only further infuriate the Moroccans.

It is difficult to recall such counterproductive behavior by a secretary-general since Javier Perez de Cuellar began engaging the parties in the mid-1980s. Initially, the UN attempted to resolve the conflict by holding a vote on self-determination. But the lack of post-referendum arrangements in the plan, with each party determined to achieve its own result in the referendum, made holding such a vote too dangerous. Baker finally proposed a compromise solution that would grant the territory autonomy for four years followed by a final status vote that would incorporate both native Western Saharans and Moroccans in the electorate.

This proposal, the Peace Plan for self-determination of the People of Western Sahara, had the unanimous support of Security Council, as well as Polisario and Algeria, and was based on King Mohammed VI’s commitment to power sharing as a means to resolving the crisis. Baker’s Peace Plan thus represented the last, best hope for Western Sahara. Morocco rejected it. Unfortunately, the Security Council, led by the US and France, key supporters of Morocco, and helped by the Secretariat began to water down Baker’s initiatives because of Morocco’s discomfort with the referendum’s independence option. Baker resigned in 2004 in the face of implacable parties and an impotent Security Council.

The UN did not realize in 2004 that it set a precedent allowing one side of the conflict effectively veto any solution it did not like. This precedent soon extended to the mediators, with one side or the other rejecting UN envoys who said things they did not like to hear. Thus the peace process has made no progress for over a decade; indeed, it has only gotten worse.

Although clearly the Western Sahara peace process has needed dramatic action to shake things up, the secretary-general’s ill advised trip to the region was a clumsy attempt that will make one of the world’s most intractable disputes even more difficult for the next secretary-general to resolve. Polisario and Algeria will only feel emboldened and Morocco will be further galvanized. The secretary-general simply walked into a trap that longtime observers of the Western Sahara conflict know all too well: the disingenuous way in which the parties play an unrelenting game of one-upmanship with every hapless peacemaker.

If the trip were an intentional attempt to get Morocco to overreact and demonstrate to the world the error of its ways, Morocco certainly obliged. After a blistering government statement and a large demonstration that some claim was organized by the government, Morocco went a step further and announced a unilateral reduction of the political staff of the UN peacekeeping mission in Western Sahara, MINURSO, and cessation of its contribution to maintain the mission. The UN is now scrambling to find a solution and most of the world is aghast at Morocco’s actions.

Meanwhile articles and statements in Algerian and Polisario press keep flagging the illegality of Morocco’s presence in Western Sahara and acclaim the secretary-general’s visit to the region. However, they also express concern about the implications of Morocco’s actions on MINURSO.

What Ban Should Have Done

Ban claims that, after nine years at the helm of the United Nations, he felt that he ought to have tried to resolve it before his departure at the end of this year, and possibly for this reason he insisted on taking the trip. But, in the face of Morocco’s obstinacy, he could have tried discretely to use his influence to build consensus among the permanent Security Council members and Morocco supporters, France and the United States, on a way forward. Such a consensus, difficult as it may be, is the only way to persuade Morocco to re-engage with the peace process. Blind and unquestioned support by Washington and Paris for Morocco’s inflexibility due to its role in anti-terrorism efforts have not helped to make the region safer.

Rather than doing that, he played into the games of the parties by helping them antagonize each other further. He publicly dressed down the Moroccan foreign minister by conveying astonishment at the statement issue by the Moroccan government after his remarks in Algeria and expressed deep disappointment and anger for the demonstration that targeted him personally. Following an emergency Security Council meeting where no statement was issued, his spokesperson expressed disappointment at the Council’s failure to take a strong stand in the dispute between him and Morocco because the Council did not urge Morocco to reverse its stance on MINURSO and did not express support for him.

Despite these steps backward, this may be an opportunity for the secretary-general and the Security Council to get serious and demonstrate a sense of urgency about a conflict that they have deliberately placed on the back burner for 25 years. Intentionally or unwittingly, the Secretary-General has been dealt a card that he can use. He can inform the Security Council that even leaving MINURSO’s military component in place, as Morocco seems to want, by having military observers continue monitoring the cease-fire, will not guarantee the region’s stability. Polisario and Algeria also need to understand that symbolic visits will not be enough to avert disappointment and frustration in the camps.

For that, real mediation work is needed by a negotiator with the Security Council’s total and unmitigated support to demand that both sides commence genuine negotiations that will involve mutual give and take. If the United States and France insist on simply calling the Moroccan autonomy offer “serious and credible” without demanding that Morocco engage in actual negotiations with the other side, then they should clarify whether they recognize Morocco’s sovereignty over Western Sahara, which is the basis of its autonomy offer.

The secretary-general and his successor should turn the responsibility of handling the conflict over Western Sahara to the Security Council and stop any pretence at mediation until the Council is ready to take difficult decisions. Meanwhile, the regional insecurity will only grow as the impasse continues, which it appears all but certain to do now.

This piece was adapted from an article originally published at World Politics Review.

Anna Theofilopoulou is a contributor to Foreign Policy In Focus and a former UN official who served as a member of the negotiating team of Personal Envoy James Baker. She covered the Western Sahara conflict from 1994 to 2006.