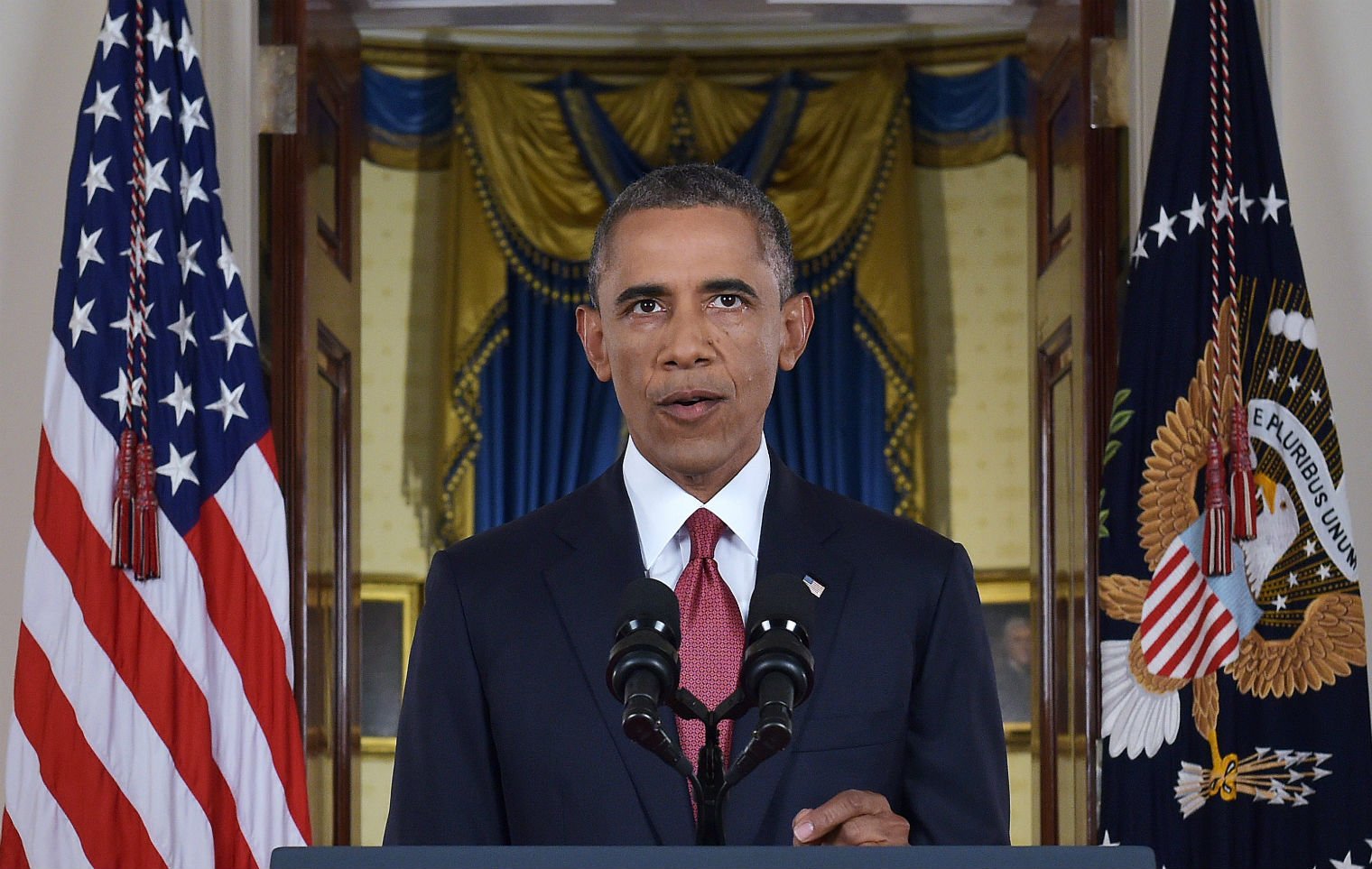 Barack Obama had good reasons to hesitate before intervening directly in Syria. He should have heeded them.

Barack Obama and the Will to Fight

The Obama administration has admitted that it misjudged the extremists who set up the Islamic State in chunks of territory torn from Iraq and Syria. The director of national intelligence, James Clapper, confessed that his analysts underestimated the “will to fight” of the jihadists. He also linked it to intelligence failures of the past, such as similar underestimations of the Vietnamese in the 1960s.

At the same time, critics have castigated the Obama administration for its apparent lack of a “will to fight.” According to this line of argument, the president should have armed the moderate Syrian rebels back when the civil war broke out in that country. He should have bombed the country when Syrian President Bashar al-Assad used chemical weapons against his opponents. He shouldn’t have withdrawn U.S. troops from Iraq.

This failure to fight in the Levant is part of a larger critique of Obama as an agnostic. He doesn’t believe in American exceptionalism or the American economic system (no matter how many times Obama has in fact reaffirmed his faith in both). He wasn’t even born in this country, two out of five Americans still suspect, so how could he fully embrace America? And on war and peace issues, he has emerged as the ultimate betrayer of the national interest by giving ground to America’s enemies across the globe. He is a wimp, a traitor, the “coward-in-chief.”

There are two possible responses to this inaccurate picture. The first is to paint a picture of Obama as a president who judiciously uses military force. He has, for instance, been very clear about not sending ground troops into the fight against the Islamic State, even though the top brass believes that destroying IS—as opposed to simply degrading its capabilities—will eventually require “boots on the ground.” The president has also carefully assembled a coalition of international actors to provide multilateral cover in the latest escalation of the conflict in the region. Elsewhere in the world, the administration hasn’t intervened in Ukraine or gone head to head with China in the South China Sea. It has made strong statements, reassured allies, upped arms transfers, and even resorted to various covert strategies. But the president has generally avoided direct confrontation.

Combine this trajectory of restraint with the president’s statements on prioritizing diplomacy and you get the image that the administration would like to cultivate: the current government is committed to “smart power” as opposed to the blunt application of “dumb power” that previous presidents (i.e., George W. Bush) wielded. There is some truth to this picture.

But let’s consider the other alternative: President Obama is no less committed to military action than any of his predecessors. He might personally have a less gung-ho disposition than, say, George W. Bush. But Obama’s personality is only a small part of the equation. Despite the putative end of the Cold War, the United States has remained on a war footing. The national security apparatus is programmed for intervention. What we see now taking place in the skies above Syria and Iraq is not an exception to the Obama-as-pacifist rule. It is a summation of a particular evolution in U.S. militarism toward the asymmetrical warfare of dispensing death at a distance.

For those who doubt the “will to fight” in the White House today, a quick glance at a recent Congressional Research Service report—Instances of Use of United States Armed Forces Abroad, 1798-2014—should dispel the misconception. Approximately 31 pages cover this 216-year history. The first 18 pages take the reader from the undeclared war between the United States and France in 1798 to the first deployments of the George W. Bush era. The next five pages list the military engagements of Bush’s two terms. Which leaves roughly eight pages for the as-yet-uncompleted Obama tenure.

By the end of Obama’s second term, he’ll likely be responsible for more than a quarter of all uses of the armed forces abroad in the history of the United States. It should be noted that this list also includes U.S. military participation in peacekeeping missions, earthquake relief, and the like. On the other hand, it doesn’t include the widespread use of air strikes and missile attacks, which have increasingly substituted for the deployment of U.S. armed forces.

In 2014 alone, the Obama administration sent an additional battalion to South Korea in January, several hundred U.S. personnel to pursue the Lord’s Resistance Army in Uganda in March, several hundred advisors to Iraq in June to assess the threat of the Islamic State, another 130 “assessors” to Iraqi Kurdistan in August to deal with the Yazidi problem, and 600 soldiers also in August to Poland as “reassurance” in the wake of the civil war in Ukraine. The list doesn’t include the air strikes in Syria and Iraq against the Islamic State and several other targets, recent drone strikes in Pakistan and Yemen, or the dispatch of 3,000 U.S. soldiers to Liberia to address the Ebola epidemic.

So, despite the rants of those hoping to goad the president into buying his very own piece of quagmire in the Middle East, the Obama administration has shown considerable “will to fight.” The problem with the current fight against the Islamic State is that, the adversary’s obvious barbarism notwithstanding, U.S. objectives are not entirely clear. Here are four concerns that should indeed undercut any thinking person’s “will to fight” in this particular situation:

The threat of terrorism – The Islamic State has decapitated its hostages, including American journalists, and routinely engages in atrocities against a wide variety of people. But it has no capability of launching any attacks on the United States. Indeed, the furthest it has gone has been to incite people within the countries arrayed against it to launch “lone wolf” attacks. To justify its latest strikes in Syria, the Obama administration held up “imminent” terrorist attacks devised by a shadowy organization called the Khorasan Group. But even these “imminent” attacks, in the wake of the Syria strikes, were downgraded to merely “aspirational.” It’s easier, of course, to justify a war if Americans feel directly threatened, as they did from al-Qaeda in Afghanistan or Saddam Hussein’s weapons of mass destruction in Iraq (though the former turned into a fight against the Taliban and the latter never materialized). IS will continue to make threats as long as they produce the result it wants: American soldiers to fight against on the battlefield and a “crusade” it can rail against to drum up more support.

The benefits for Assad – War is never an easy sell, but it’s particularly difficult if it’s against an enemy of your enemy. The Obama administration naturally has not emphasized the benefits that accrue to Syrian leader Bashar al-Assad when U.S. air strikes degrade the capabilities of one of his leading opponents. But Syrian diplomats have not been shy to trumpet this self-serving interpretation.

The nature of the “moderate” Syrian forces – The air attacks against Syria are part of a larger policy that includes training Syrian rebels in Saudi Arabia and other countries in the region. The program, which will cost $500 million, is slated to train 5,000 rebels in the first year. The trainees are naturally expected to fight against the Islamic State. But frankly their main objective has been to topple the Assad regime, and it’s not inconceivable that at some point they might team up with the extremists if that advances their prime directive.

It doesn’t help that the United States is wading into a situation where alliances and ideologies seem to change on a daily basis. Case in point: the Nusra Front (Jabhat al-Nusra). It’s affiliated with al-Qaeda, but it also has fought alongside the Free Syrian Army (FSA). When the United States listed the Nusra Front as a target of air strikes, many FSA fighters balked. “As long as al-Nusra, whose members are mostly Syrians, did not attack the Syrian people while fighting the regime, we are against targeting it,” explained an FSA leader on the northern front. It’s a war going on over there: “moderate” is a word that juts doesn’t make sense in an increasingly brutal environment.

The slippery slope of advisors – Although the president has drawn a red line on the issue of U.S. boots on the ground in this conflict, he has fudged the issue by sending over advisors to help with the targeting. He has also warned the U.S. public that this will not be a quick mission, like the capture and killing of Osama bin Laden. It’s useful to remember that U.S. involvement in the Vietnam War also began with advisors—in 1950. At that time, we were helping the French in what would be a losing effort. Later, after the partition of the country in 1954, Washington tried to keep the South Vietnamese government afloat (sound familiar?). By 1963, 16,000 U.S. advisors were in country. So, considering the complexity of the war in Syria and Iraq, we might well see a similar “advisor phase” that grows and grows until, surprise: boots on the ground.

These four caveats make the application of “smart power” by the Obama administration look increasingly dumb. There were good reasons for the president to hesitate before intervening directly in the past. He was not Hamlet seized by an existential crisis. He understood the significant trade-offs and calculated that intervention was not worth it.

But that was before domestic political pressure combined with the demands of a national security state still geared to fight a long war on terror. Obama, in the end, indeed showed that he did not have the will to fight. He was willing to stand up against the Islamic State. But he didn’t have the courage to stand up against his more hawkish opponents in Congress and the media.