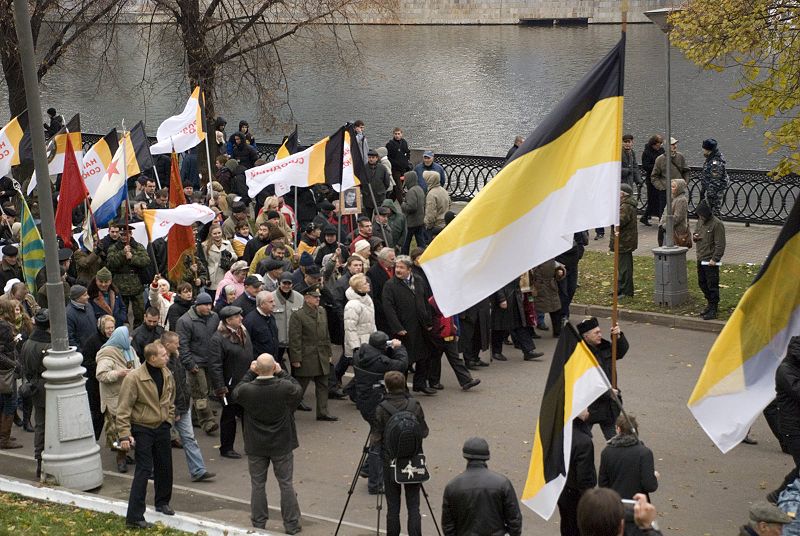 Brown Is the New Black

Fashions come and go. And this year, across the broad swath of Eurasia, fascism is in.
By John Feffer | March 26, 2014

The new spring season is just around the corner, and it looks as though the new “in” color is brown. That’s brown as in “brown shirts.” Perhaps you thought that fascism went out of fashion in the 20th century. But there’s nothing like a lingering economic crisis to bring out the vintage ideologies.

The far right is expected to do well in the upcoming European Parliament elections in late May, buoyed by the electoral strength of parties like the National Front in France. In the East, Jobbik in Hungary, Ataka in Bulgaria, and Golden Dawn in Greece have established footholds in their respective parliaments. And let’s not forget everyone’s new favorite fascist fad, Svoboda and Right Sector, in Ukraine.

The influence that the far right has right now on the interim government in Kiev is indeed worrisome. But they remain a minority and, judging by public opinion polling, will continue to be so after the next elections. Nevertheless, the Russian government has branded the entire post-Yanukovych ruling elite “fascist” and therefore illegitimate, and many overseas supporters of Russia’s actions in Crimea have followed suit.

What hasn’t received much attention, however, is the influence of the far right in Russia itself. It makes Ukrainian fascism look like child’s play.

Presidential elections in Russia, I once predicted, “may usher in an autocrat by democratic means, a la Germany in the 1930s.” Such an autocrat “could turn Russia into Chile on a grand scale, a Chile that not only clamped down on internal dissent but stamped out opposition in its neighboring countries as well.”

I published those sentences in the now-defunct Covert Action Quarterly in 1996, long before Vladimir Putin arrived on the political scene. I’d just returned from a trip to Moscow. At the time, Boris Yeltsin and his coterie of cronies were giving liberalism a bad name, fascism was making a comeback after many decades of hibernation, and several political strongmen were contending for the honor of ruling Russia with an “iron fist.” Military general Alexander Lebed, who had openly professed his admiration for Chilean dictator Augusto Pinochet, was one such candidate. He placed third in the 1996 presidential elections, eventually took over a governorship, and died in a helicopter crash in 2002.

But Lebed was in many ways just a moderate nationalist. A much more authentic avatar of Russian fascism was Vladimir Zhirinovsky. Openly anti-Semitic, deeply misogynistic, and thoroughly racist, Zhirinovsky has often been dismissed as simply a clown. But he has proven to be an enduring politician since he first emerged in the early 1990s talking about retaking Alaska, reviving the southern surge to the Persian Gulf, and redistributing free vodka and underwear. His Liberal Democratic Party—don’t let the title fool you—is currently the fourth largest in the Russian Duma, with nearly 15 percent of the seats.

Clown prince of politics or not, Zhirinovsky is currently the deputy speaker of the Duma. His party’s brand is “Greater Russia”—the revival of the once-mighty Russian empire—and this has become a much more popular vision than it was in the immediate aftermath of the Soviet Union’s demise. His approach to Ukraine is rather close to how Serbian leader Slobodan Milosevic once viewed Bosnia. In a recent letter, Zhirinovsky proposed that Poland, Hungary, and Romania retake sections of Ukraine that had once been their territory, presumably as part of a land grab that would have Russia take over eastern Ukraine.

Zhirinovsky’s views, if not Zhirinovsky himself, attract wide support. Racism runs deep in Russian society. Racially motivated attacks and killings have been widespread, only 24 percent of the population (in 2011) rejects the slogan “Russia for Russians” as fascist, and an estimated 50,000 skinheads are active in Russia today. President Putin has condemned the use of racism in the media and politics, and the Russian Federation has more vigorously prosecuted neo-Nazi groups and racist crimes, as the most recent Council of Europe report notes. But the level of xenophobia in the country makes non-Slavs often feel unwelcome and under threat, to put it mildly.

The success of the far right, however, has not been simply to elevate Zhirinovsky in the Duma or to swell the crowds of neo-Nazis who march in Moscow and other major cities. Rather, the far right has been able to shape the very mainstream of Russian policy.

In many ways, Vladimir Putin is the autocrat that I imagined back in the 1990s would come to power. Russia remains a democratic state, but it is an “illiberal democracy” (as John Gray would say) or a “democracy with Russian characteristics” (as the Chinese might say). Putin’s party United Russia dominates parliament, and the president has systematically removed any potential challengers to his authority. For instance, he deployed his “iron fist” to rein in the oligarchs by arresting the country’s richest businessman and supporter of the political opposition, Mikhail Khodorkovsky, and shipping him out to Siberia for 10 years. Sergei Magnitsky, an auditor who alleged large-scale state theft of money, died in prison. Opposition leader Alexei Navalny, who led huge demonstrations against Putin, was also thrown in jail. Although released after a few months, his probation bars him from running for political office for as many as 10 years. Even members of the flamboyant but rather innocuous punk band Pussy Riot were sent to the labor camps.

Putin tolerates very little dissent. He restricts the dissemination of information through state control of television and radio (and his government has targeted the remaining independent radio station, Ekho Moskvy, and TV station, Dozhd). Russia currently ranks 148th in the press freedom index from Reporters Without Borders, below Afghanistan and the Central African Republic. The state has also blocked opposition Internet sites, using a new law from December that allows the Russian equivalent of the attorney general to crack down on anything deemed “extreme.” The ministry of justice has used the law on “foreign agents” that went into effect last March to rein in the activities of thousands of NGOs throughout the country. Meanwhile, Putin has created a veritable cult of personality through youth organizations like Nashi (since disbanded) that glorified his policies and behaved like a gang of thugs against presidential opponents.

This, of course, is just run-of-the-mill authoritarianism, not fascism. But in other ways, the Putin government is pushing Russian policy even further rightward. This turn is most evident in foreign policy where Putin has put the protection of Russians in the “near abroad” at the center of his concerns. The seizure of Crimea—after a military intervention and a jury-rigged referendum—is only the latest in a series of efforts to expand the Russian sphere of influence that has included the 2008 war with Georgia, the support extended to breakaway regions like Transnistria in Moldova, and the funding of Russian nationalists in other neighboring countries like Latvia. The Crimean adventure, however, reveals the true nature of Putinism. He has cut Ukraine down to size in the same way he went after Khodorkovsky. Any person, institution, or country that dares to challenge his authority should expect to feel his wrath.

Still, this expansionist Russian foreign policy might seem like nothing more than ordinary imperialism. In the larger context of the revival of Eurasianism, however, it begins to assume a different character.

Eurasianism began in the Russian émigré community of the 1920s as a spiritual alternative to both Bolshevism and liberalism. A messianic vision that looked more into the future than back into the 19th century, it focused on Russia’s Asian roots (mostly imagined) and the country’s role in bridging two continents and many cultures. The Eurasianist philosophy drew on Slavophilism, but differed in important respects such as a statist predisposition and a streak of cultural avant-gardism. As such, Eurasianism offered a third path between communism and capitalism, Slavophilism and Westernism, Europeanism and Asianism.

In the 1990s, Eurasianism made a comeback in the work of analysts such as Yeltsin adviser Sergei Stankevich. This revival stressed historic destiny over pure rationalism and the interests of Russians over abstract liberal reforms. Eurasianism assumed a concrete form in the proposals of Kazakhstan’s Nursultan Nazarbaev for a “Eurasian” union that would anchor a stronger Commonwealth of Independent States. In striking a balance between Russian national interests and cooperation with the West, a Gaullist approach emerged that could be termed “moderate” Eurasianism.

But Eurasianism also has its more intolerant side. In 1995, for instance, the Russian Duma conferred its first “Milestone” award on late anthropologist and noted Eurasian scholar Lev Gumilev. Among other things, Gumilev was convinced both of Russia’s superiority to the West and the necessity of preserving the genetic stock of ethnic Russians. In the popular writings of Aleksandr Prokhanov, meanwhile, Eurasianism assumes the form of an Asiatic despotism shot through with European fascism. Eurasianism, in other words, can also be a facade for Russian racism and a vehicle for Russia’s colonial aspirations.

Putin has instituted a Eurasianism from above, with his updated version of Nazarbaev’s proposal—the Eurasian Union that currently counts Russia, Belarus, and Kazakhstan as members. Ultimately, Putin wants to reconstruct an entity of the size and heft of the Soviet Union that can balance and bridge China to the east and Europe to the west. Ukraine is key piece of this jigsaw puzzle.

But there is also the Eurasianism from below. Far right movements in Europe have thrown in their lot with Russian fascist groups and with Putin’s government as well. Russian fascist political scientist Aleksandr Dugin has pushed hard for the most intolerant and racist version of Eurasianism, and he has attracted the support of Hungary’s Jobbik. Marine Le Pen, of the National Front in France, has also visited Moscow and sat down with more establishment figures, like Deputy Prime Minister Dmitry Rogozin, who has long been a key member of the Russian far right.

If you add it all together—autocracy, imperialism, and a semi-mystical belief in the divine mission of ethnic Russians—the result looks browner and browner by the minute.

The West is partly to blame for not encouraging the more moderate version of Eurasianism to flourish in Russia. Instead of establishing a strategic partnership with Russia in the wake of the Cold War, the West pushed NATO ever eastward, violating a promise Washington made to Moscow in the early 1990s. The Atlanticists forced Ukraine to choose between east and west instead of creating space for it to be a Eurasian bridge. When it “lost” the Cold War, Russia wasn’t saddled with the kind of Versailles reparations package that helped foster the rise of Nazism in Germany. But Washington did precious little to stabilize Russia in the new economic and security architecture of Europe. It’s no surprise that the politics of resentment have produced both fringe fascism in Russia and the more mainstream but equally intolerant Eurasianism that serves a vehicle of Russia-firstism.

At the level of geopolitics, Washington needs to work with Moscow on a range of issues from arms control to the nuclear agreement with Iran. And there is still a chance that the crisis in Crimea will be a wake-up call to leaders on both sides that Eurasia versus Oceania doesn’t work any better in reality than it did in the pages of 1984. Still, we should have no illusions about the influence of the far right on Putinism and the gradual browning of Russia.

Fashions come and go. And this year, across the broad swath of Eurasia, fascism is in.