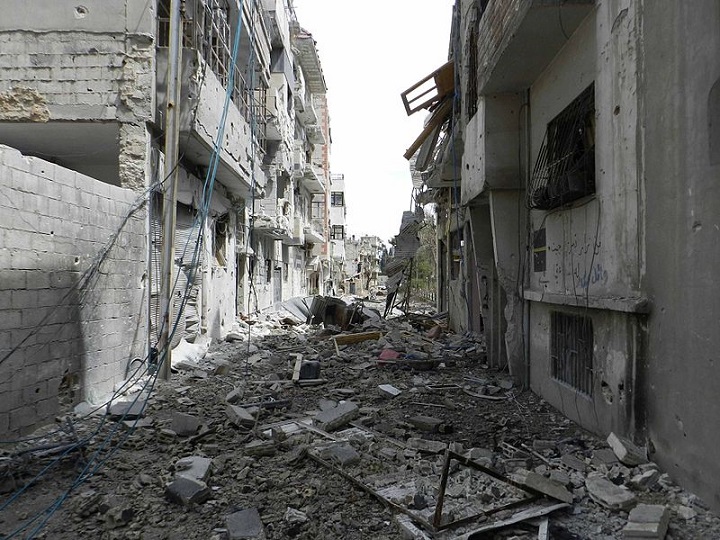 Once again, R2P — responsibility to protect — is being used as a pretext for attacking Syria.
By Coleen Rowley | February 24, 2014

On February 15 at FPIF Focal Points, Rob Prince wrote, “At a moment when the only viable path open to resolving the Syrian conflict lies in a negotiated settlement between the Assad government and the legitimate opposition, two colleagues at the University of Denver’s Korbel School of International Studies, Nader Hashemi and Danny Postel of the Center for Middle East Studies, have put forth an emotional and poorly conceived call for military intervention to resolve the escalating humanitarian crisis there” in a New York Times op-ed. Now Coleen Rowley, who you may remember for the service she performed for the nation as a post-9/11 FBI whistleblower, weighs in.

Cross-posted from the March newsletter of Veterans for Peace, Chapter 27.

The propaganda that continues to flourish for war on Syria shows many Americans fail to understand the problems posed by “US Empire-building” believing it to be an altruistic force, toppling other governments and starting wars for the good of all mankind. Two recent articles in the New York Times (NYT): “Use Force To Save Starving Syrians” and “U.S. Scolds Russia as It Weighs Options on Syrian War” are typical of the concerted efforts underway to ramp up US military intervention despite overwhelming opposition voiced by Congress and the American public thwarting Obama’s plan to bomb Syria announced in late August last year.

The “U.S. Weighs Options” news piece is easier to expose since it employs an obviously twisted and one-sided reporting lens that puts the primary blame on Russia for the violent conflict in Syria. It was apparently fed to Michael R. Gordon and his NYT colleagues by anonymous Administration officials as well as the Washington Institute for Near East Policy, the neo-con think tank nefariously founded by the Israeli American Public Affairs Committee (AIPAC) to deceptively appear to be independent of its parent, the foreign-based lobby group.  (AIPAC has been revealed by scholars as the most powerful force in recent decades on US foreign policy, repeatedly pushing the U.S. into wars for Israel.) It should be recalled that Gordon himself is the same NYT reporter who gave a big assist back in 2002 to Judith Miller, notoriously collaborating with Scooter Libby and other neoconservatives to gin up war on Iraq by writing false front page stories about Saddam’s WMD. Unfortunately Gordon never was held accountable (in contrast to Miller who was eventually forced out of the NYT and also did jail time, for covering for Libby’s other illegal leaks).  It’s therefore not surprising that Gordon and others continue to carry water and blatantly skew the facts for AIPAC and the neocons.

The other push for increased military intervention in Syria, however, could be categorized as “neo-lib.” The “Use Force…” op-ed by long-time advocates of “Right to Protect (R2P)” and Syrian regime change, Danny Postel and Nader Hashemi, current heads of the University of Denver’s Korbel School of International Studies, is even more insidious. As their colleague, Professor Rob Prince, explains in his insightful counterpoint, “Military Humanitarian Intervention: the Shock Doctrine Applied to Syria:”

In calling for military intervention in Syria — something not even the U.S. military itself is particularly enthusiastic about — Hashemi and Postel cozy up, as they have before on Iran in 2009 and Libya in 2011, with the likes of AIPAC, along with this country’s band of intrepid and misdirected neoconservatives. These are the same elements that pushed this country into invading Iraq and continue to push the Obama Administration to intervene militarily in Syria.

Close examination of the facts–rather than shock doctrine emotion–is indeed required because R2P is based on a form of ends-justify-the means, concocted utilitarianism, i.e. Orwellian-type propositions that killing can save lives, that war can bring human rights, democracy and peace. It’s not different from the prevalent argument that torture can be justified as saving lives or “we must bomb the village to save it,” designed to prey on people’s emotions instead of facilitating critical thinking based on actual facts or research.

These two writers urging U.S. military force admit “political interests” typically lie behind R2P interventions.  But they fail to recognize how their own long-standing political interest in toppling the current Syrian government undercuts their own claimed morality mantel. It also casts doubt on their suggestion that such force and aerial bombardment would be used evenhandedly against both Syrian regime forces and/or rebel militias, upon whichever side blocks the delivery of food and humanitarian supplies. Any “humanitarian” proposal emanating from Obama and Kerry who similarly announced “Assad must go” from early on would naturally face equal skepticism.  Russia and China certainly remember how they were deliberately misled in UN Security Council discussions to not veto what then U.S. Ambassador Susan Rice sold as a limited “no fly zone” humanitarian mission to protect Libyans in Benghazi but which morphed within days of that vote into thousands of NATO bombing sorties over six months to take out Qaddafi and force regime change upon Libya.  In the case of Libya, a right to “protect” turned out to mean the right to destroy. That probably explains why Postel-Hashemi do not point to Libya as their precedent for R2P success but, rather bizarrely, to Somalia and “Black Hawk Down.”

It’s long been observed that “truth is the first casualty of war.” So fact checking is needed when these R2P-regime change proponents point to the “humanitarian nightmare in Syria — replete with refugee flows, sarin gas, barrel bombs, and “industrial-scale” killings and torture, (which have) horrified the world.” Facts are inherently scarce in the fog of war enveloping Syrian atrocities. Eventually truth will emerge.  But for starters, very little solid evidence exists as to who was responsible for the sarin attack on Ghouta on August 21. Despite John Kerry’s initially bold claims that the U.S. possessed “undeniable” evidence that Assad’s forces were responsible “beyond any reasonable doubt,” Seymour Hersh and other investigative journalists have reported that US intelligence was never conclusive. Evidence does exist of a few hundred Syrians dying in the August chemical attack but the (overly precise) figure the U.S. cited of 1429 victims is now widely viewed as exaggerated since it stemmed from a sloppy, rushed counting of shrouded images in various videos by US intelligence agencies.

The U.N. too has already backtracked on several of its original key findings about this sarin attack. Whatever bits of intelligence the U.S. does possess remain classified and secret to this day so it’s hard to assess but, at very least, the trajectory “vector  analysis”–referred to by our United Nations Ambassador Samantha Powers and relied upon by the NYT and Human Rights Watch (HRW)–has been significantly discredited. The NYT had to print a retraction of its initial map showing trajectories of sarin-loaded missiles traveling 9 kilometers after it was determined the range of the actual missiles used was no more than 2.5 kilometers.

The NYT’s and HRW’s concocted maps were further undercut by the fact that no sarin was found at the site of the supposed missile landing in Moadamiya, south of Damascus. The only rocket tested and found to be carrying Sarin was the one that landed in Zalmalka/Ein Tarma, east of Damascus.  (HRW’s errors and, even worse, their failure to admit these errors when they knew their map was being relied upon to justify US bombing of Syria, also calls their agenda into question.  HRW’s hypocrisy using human rights as a pretext for military intervention and its directors’ conflicts of interests is documented elsewhere.)

In late January, 2014, two weapons experts challenged the ballistic data, concluding “that under no circumstances can Syria be held accountable for the massacre” (see Flawed US intelligence on Ghouta massacre based on MIT report: “Possible Implications of Faulty US Technical Intelligence in the Damascus Nerve Agent Attack of August 21, 2013”)

War crimes should of course always be brought to light and prosecuted.  But the recent “smoking gun” report accusing Assad and conveniently made public just when the Geneva II peace negotiations were getting underway is suspicious on many levels. Reportedly commissioned and funded by Qatar, a country arming and funding Syria’s rebels, the report lacks independent, unbiased sources and omits evidence of war crimes being committed by rebel factions in Syria. (Also see “Is Syrian peace conference laying the foundation for war?“)

It’s no secret that the U.S. has a long history of toppling governments that it doesn’t like, even democratically elected ones. And Syria is not the only place right now where the official goal is regime change! The coup orchestration department is working overtime these days with reports of U.S. attempts to topple governments in Venezuela and the Ukraine. (U.S. meddling in the latter, despite the complexity of the situation—see here and here, was recently confirmed through interceptions of Assistant Secretary of State Victoria Nuland, formerly Dick Cheney’s principal deputy foreign policy advisor and married to neocon Robert Kagan, co-founder of the Project for the New American Century.)

The use (abuse) of human rights law as justification for orchestrating such “regime changes” in Syria and around the world exemplifies a dangerous form of hypocrisy as it serves to deprive these international principles of legitimacy.

As retired CIA analyst Paul Pillar recently wrote, it is a mistake to see “the United States as an omnipotent global savior or policeman. We ought to bear this principle in mind in contemplating policy about problems anywhere on the globe. It certainly should be borne in mind with the Middle East, where there is a still fairly recent history of forceful U.S. action doing more harm than good…”

In May of 2002, Coleen Rowley brought some of the FBI’s pre 9/11 lapses to light and testified to the Senate Judiciary Committee about some of the endemic problems facing the FBI and the intelligence community. Rowley’s memo to FBI Director Robert Mueller in connection with the Joint Intelligence Committee’s Inquiry led to a two-year long Department of Justice Inspector General investigation. She was one of three whistleblowers chosen as persons of the year by TIME magazine. She currently works with the Veterans for Peace chapter in Minneapolis, Minnesota.