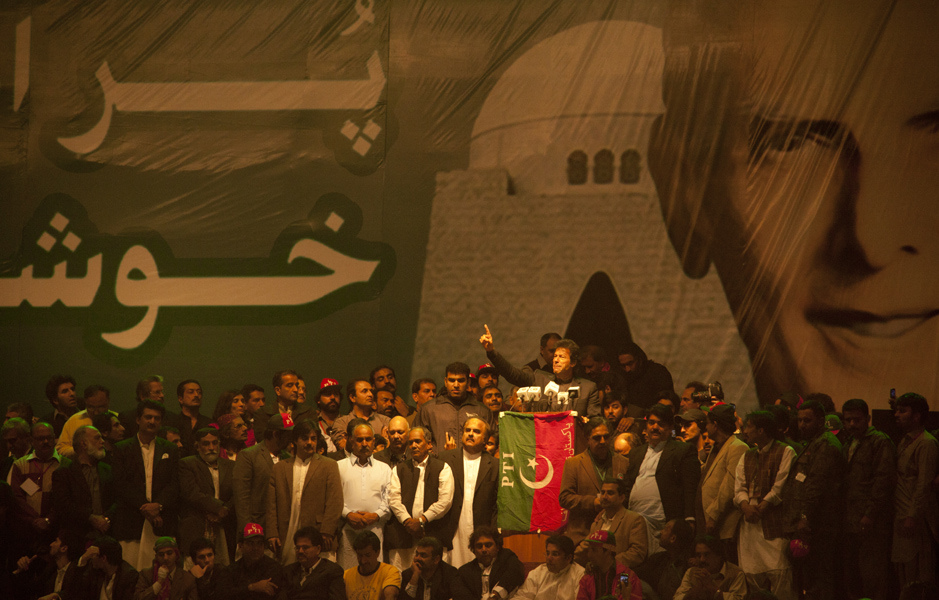 Drone strikes in Pakistan: Reapers of Their Own Destruction

The 10-year drone-war killing spree has unleashed the seeds of its own destruction: a nonviolent resistance movement.
By Medea Benjamin | November 29, 2013

“We will put pressure on America, and our protest will continue if drone attacks are not stopped,” said an angry Imran Khan, leader of Pakistan’s third largest political party, the PTI (the Pakistan Tehrik-i-Insaaf).

He was speaking on Saturday, November 23, to a crowd of over 10,000 protesters who blocked the highway used by NATO supply trucks taking goods in and out of Afghanistan. The latest protests in Pakistan show that even when U.S. drone strikes hit their mark, as in the case of the last two strikes in Pakistan that killed key leaders of two extremist cells, they’re still counterproductive.

Most Pakistanis reject the Taliban and other extremists. But they also reject the American drones that violate their sovereignty and operate with impunity. The Pakistani resistance, along with growing opposition within the United States, has had an impact: the number of Predator and Reaper drones strikes in Pakistan has been steadily declining, from a high of 122 in 2010 to 48 in 2012, and even fewer this year.

But the strikes have not stopped, and each strike now receives greater scrutiny and opposition. This is the case of the two attacks that took place in November.

On November 1, a Hellfire missile from a Predator drone killed Hakimullah Mehsud and at least four others. Mehsud was head of Tehrik-i-Taliban Pakistan (TTP), a group responsible for the killing of thousands in Pakistan and Afghanistan. The Pakistani Taliban also claimed responsibility for the failed bomb plot at New York’s Times Square in 2010, and was connected with the killing of seven CIA employees in Afghanistan in 2009.

The Pakistani government was incensed by the drone attack. They certainly had no love for Hakimullah Mehsud, but Pakistani negotiators had been carefully working for months to bring the TTP militants to the negotiating table to end more than a decade of violence. In fact, the peace talks were scheduled to begin the very next day, November 2.

Interior Minister Chaudhry Nisar Ali Khan charged that the drone attack that killed Mehsud also blew up the government’s efforts at negotiations, and that peace talks could not move forward until there was an end to drone attacks in Pakistan.

But the CIA, which carries out the strikes in Pakistan, ignored the Pakistani government’s wishes and launched another strike on Thursday, November 21. This time the missiles hit a religious seminary, killing at least six people and wounding eight. Among the dead were militants belonging to the Haqqani network, including senior leader Ahmad Jan. The Haqqani network used to be part of the U.S.-backed forces fighting the Soviet occupation of Afghanistan. The U.S. government accuses the Haqqani network of orchestrating the 2011 attack on the U.S. Embassy in Kabul that killed 16 people, and an assault on the Intercontinental Hotel in the Afghan capital the same year that killed more than 20.

This strike brought a particularly visceral reaction because unlike the hundreds of other strikes in Pakistan that have taken place in the tribal territories, it occurred in the northwestern Khyber-Pakhtunkhwa (KP) province, which is controlled by the staunchly anti-drone political party, the PTI.

At the November 23 rally, PTI leader Imran Khan threatened to organize a long-term blockade of the NATO supply route. Any prolonged disruption of the key route in the KP province could disrupt U.S. plans to remove troops, weapons, and equipment from Afghanistan by the end of 2014.

This is not an empty threat. The Pakistani government shut down supply routes for seven months after an American helicopter attack accidentally killed 24 Pakistani soldiers and only reopened them after the U.S. government apologized.

Imran Khan also used the rally to attack Prime Minister Nawaz Sharif’s government for failing to force the Americans to halt drone strikes. Sharif has been outspoken against the strikes, even during the election campaign. After becoming prime minister in June, he publicly ordered the military to end its policy of “condemning drones in public while being complicit in them.” During an October meeting in Washington with President Obama, Sharif reiterated his belief that drone strikes were counterproductive and should end.

But Sharif’s ability to force Washington’s hand is constrained by finances: his government relies on $1.6 billion in U.S. aid and is dependent on U.S. support for the $6.7-billion International Monetary Fund loan package it just signed. The government’s inability to stop the drone attacks makes it look weak and subservient to U.S. interests, undermining Pakistan’s fragile democracy.

The two drone strikes in November show that these attacks don’t just kill and maim individuals. They also blow up peace talks. They weaken democratically elected governments. They sabotage bilateral relations. They sow hatred and resentment.

In response, the world community is rising up with mass demonstrations in Pakistan, solidarity protests in London, and with hundreds gathering at the 2013 Drone Summit in Washington, DC. The 10-year drone-induced killing spree has unleashed the seeds of its own destruction: a nonviolent resistance movement.

Medea Benjamin is the cofounder of the human rights group Global Exchange and the peace group CODEPINK. She is the author of Drone Warfare: Killing by Remote Control.