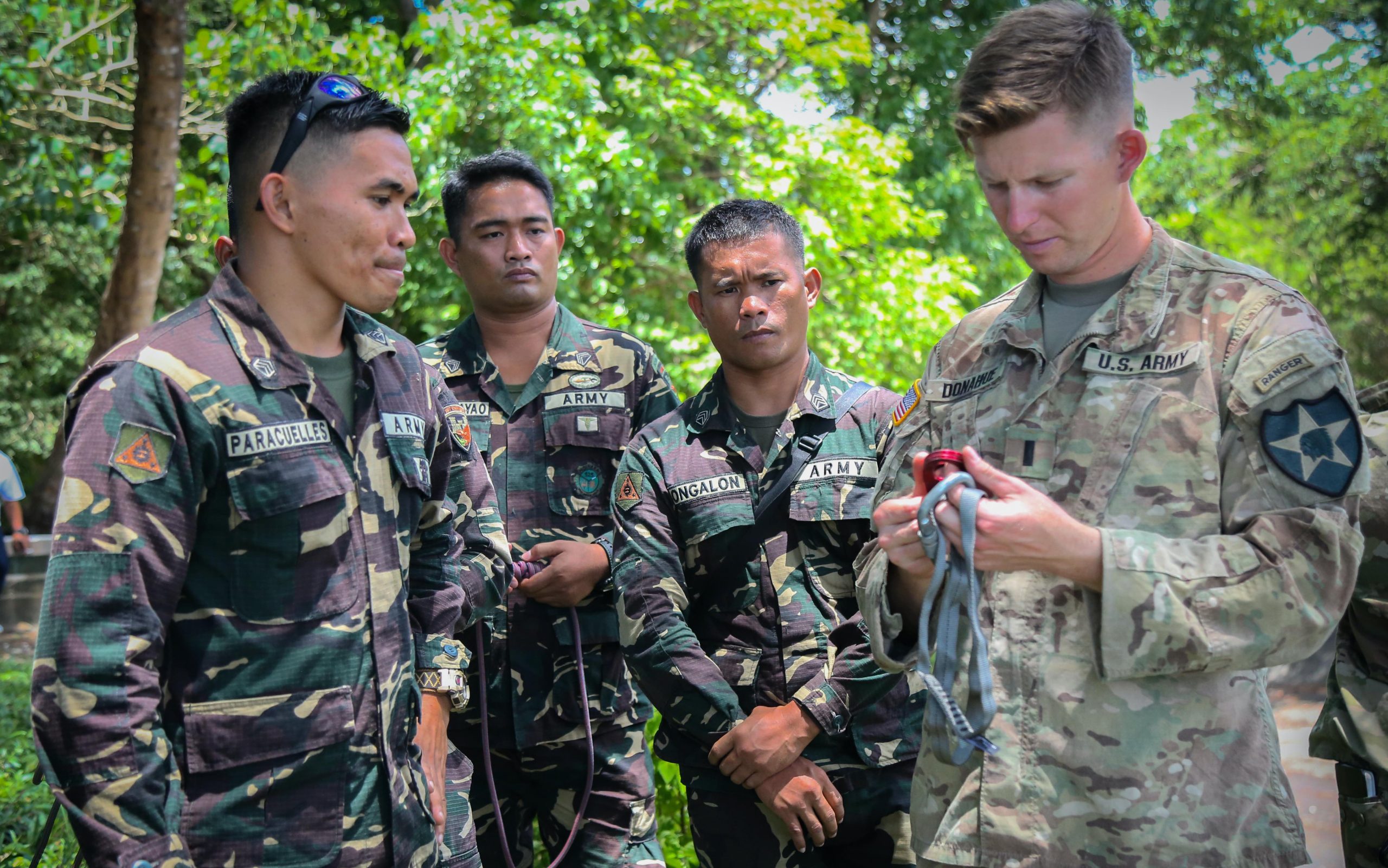 U.S. Army 1st Lt. Alex Donahue discusses the importance of proper knots and rigging with Philippine soldiers during a subject matter expert exchange in support of Balikitan 2017 at Fort Ramon Magsaysay, Philippines on May 4, 2017. US Army Photo

Duterte Does the Right Thing for a Change

He might be the devil incarnate, but Philippine leader Rodrigo Duterte is beginning the process of ending over 120 years of colonial subjugation.
By Walden Bello | February 19, 2020

Philippine President Rodrigo Duterte’s termination of a key military pact with the United States, the Visiting Forces Agreement (VFA), which governed the deployment of US troops in the country, has evoked varied responses. In some liberal and progressive circles, the move provoked trepidation owing to Duterte’s perceived closeness to Chinese President Xi Jinping. Others were disoriented by the fact that the agent of a change they had long wanted had also been responsible for thousands of extrajudicial executions in his “war on drugs.” Adding to the confusion was President Donald Trump’s facetious reaction to Duterte’s move, saying “it’ll save us money.”

It cannot be denied, however, that the termination of VFA was a positive, historic step from the point of view of the national interest of the Philippines. In recent years, much local attention has focused on China’s incursions and outright grabbing of maritime formations claimed by the Philippines in the South China Sea, officially renamed by the Philippine government as the West Philippine Sea. Like many U.S. dependencies, the Philippines has had a Mutual Defense Treaty (MDT) with Washington that dates back to the Cold War era and serves as the legal touchstone of the VFA. Not surprisingly, as frictions with China increased, Philippine presidents from Ferdinand Marcos in the 1970s to Benigno Aquino III in more recent years invoked the MDT to get the United States to back up the Philippines’ territorial and resource claims in the Spratly Islands group. In response, Washington has consistently said that the MDT does not obligate the United States to support the Philippines’ territorial claims because it “does not interfere in sovereignty issues.” Essentially, Washington was saying, “you’re on your own” as far as the Spratly Islands were concerned.

At the same time that it was refusing to be drawn into what it saw as a matter of marginal relevance to U.S. interests, however, Washington was busy drawing the Philippines more tightly into a de facto military alliance to project power onto the Chinese heartland. This revealed to many Filipinos how one-sided the relationship was and led some traditional politicians like Duterte to begin to appreciate what the Left had been saying all along: that the MDT and the VFA were vestiges of a colonial past that subordinated the country’s national interest to the strategic designs of the United States in the Asia Pacific.

Why Washington Wanted the VFA

Coming into force almost a decade after the Americans gave up Subic Naval Base and Clark Air Force Base in 1991, the VFA reflected the U.S. move from a position of regarding China as a “strategic partner” under the Clinton administration in late 1990s to its defining Beijing  a “strategic rival” under George W. Bush in the early 2000s. Under the guise of training Filipino troops, the VFA was a step toward reestablishing a permanent military presence in the Philippines and making it a forward base in its strategy to “contain” China.

What motivated Washington was China’s major push to improve its missile defense emplacements on its long southeastern and eastern coastline and on maritime formations in the East and South China Seas. This followed Beijing’s realization of how vulnerable to U.S. attack its coastal urban industrial infrastructure was when Bill Clinton sent two carrier task forces to the region to intimidate China during the Taiwan Straits Crisis in 1996.

In the succeeding years, the Pentagon carried out an aggressive upgrading of its capabilities to penetrate China’s improving anti-ship and anti-missile defensive shield (A2/AD) in the area. The result was the institutionalization of an offensively oriented warfighting doctrine focused on China: the AirSea Battle Strategy. According to the most authoritative elaboration of AirSea Battle—recently given the new name of Joint Concept for Access and Maneuver in the Global Commons (JAM-GC)—the strategy is designed to carry out “’kinetic and non-kinetic’ (in other words, both explosive and electronic) strikes against inland command centers, radar systems and intelligence gathering facilities, raids against missile production and storage facilities and ‘blinding’ operations against Chinese satellites.” It also says that China’s “seaborne trade flows would be cut off, with an eye toward exerting major stress on the Chinese economy and, eventually , internal stress.” The account explicitly admits that the aim of AirSea Battle is “to overcome China’s A2/AD defenses” because failure to so would result in the “United States [finding] itself effective locked out of a region that has been declared a vital security interest by every administration in the last sixty years.”

Not surprisingly, revelation of the strategy rattled Beijing and pushed it to fortify and increase its defensive perimeter in the South China Sea. This also led it to some rash and unjustifiable moves such as seizing and erecting military structures on maritime formations claimed by the Philippines and other Southeast Asian countries and declaring some 90 percent of the sea as belonging to China.

Key to AirSea Doctrine was obtaining bases in the Philippines to provide fire and logistical support to American air and naval efforts to swamp or maneuver around China’s coastal and island defenses.

Concluded by the Aquino administration and the Obama administration in 2014, the Enhanced Defense Cooperation Agreement (EDCA), the VFA’s sister agreement, can be described as nothing less than a gift to Washington. It allowed the United States to set up military bases for troops and store war materiel in nominally Philippine bases. And Washington could have these bases without paying rent—the sticking point in the failed 1990-91 base renegotiations that had led to the closure of Subic and Clark.

Not surprisingly, Filipinos became increasingly alarmed that they had not only been maneuvered into making a major cession of their sovereignty, but geopolitically and geographically, they were being placed between a rock and a hard place. Joint military training under VFA and hand-me-down military aid plus “defense of freedom” rhetoric were cheap change for placing the country in harm’s way. The bases were being primed to serve as springboards for an offensive strategy to overcome China’s A2/AD defenses on its coasts and the West Philippine Sea. At the same time, these bases and the surrounding Philippine cities and countryside would be within range of intermediate-range Chinese missiles in the event of a conflict. With heightened tensions in the South China Sea, where a runaway arms and strategic race had created a situation where a mere ship collision could escalate into something much bigger, the bitter realization took hold that Washington had enlisted Duterte’s strategically naïve predecessor, Aquino, in a dangerous military alliance against China without even the decency of a formal alliance. This was, in strategic terms, the worst of all worlds, and it rankled not just progressives but Duterte as well.

Under the Trump administration, the position of the Philippines has gotten even more precarious. The interests of allied states have perhaps counted less with Trump than with any other U.S. president in recent times. More important, Trump has taken the United States out of the Intermediate Nuclear Forces Treaty (INF), and his Secretary of Defense Mark Esper has made it clear that Washington will now set up intermediate-range nuclear missile emplacements directed at China in the Western Pacific, with the possibility that these could be lodged in the U.S. bases in the Philippines.

Trump’s anti-China rampage cannot be assumed to be confined only to the trade front, especially since key advisers like Peter Navarro see trade and military strategy as part of the same stick. This makes the Pentagon quite happy since it has corralled Washington’s civilian leadership into viewing China with the same lens: not just a strategic competitor but a strategic enemy.

The National Interest and History’s Tricks

The logic of national interest dictates that, like the proverbial David, the Philippines must not be dragged into this conflict between two Goliaths. Indeed, the Philippines is ditching the VFA just in time. And Duterte should not just end the VFA but go all the way and scrap the Mutual Defense Treaty and EDCA as well.

There are progressives in the Philippines that are bothered by the fact that it is a mass murderer like Duterte (the victims in the war on drugs are now said to be about 27,000) that is ending the military alliance with the United States. Or they’re concerned that the fellow’s motivations may not be the purest (he is reportedly miffed by one of his top allies being refused a visa by Washington).

But hey, history loves to play tricks on people. The man may be the devil incarnate, but if he serves as history’s agent to begin to put an end to over 120 years of colonial subjugation and post-colonial subordination to a supremely self-interested, callous, and imperious master, I’m on his side…on this issue, that is, even as on matters of human rights and democratic rights, I and other progressives continue to condemn his policies.

FPIF commentator Walden Bello is a former member of the Congress of the Philippines.  A consistent advocate of an independent foreign policy, he opposed the US-Philippine Enhanced Defense Cooperation Agreement (EDCA) at the same time that he sponsored the resolution renaming the South China Sea the West Philippine Sea.  He is also the author of two recent studies, China: An Imperial Power in the Image of the West, and Trump and the Asia-Pacific: The Persistence of Unilateralism, which can be accessed at https://focusweb.org.