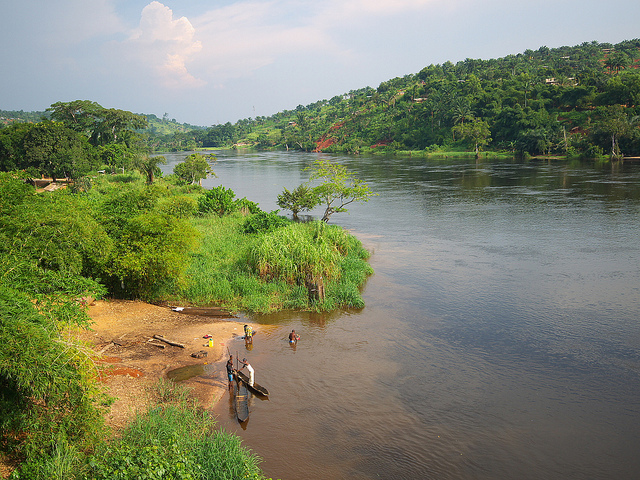 The Ebola River, similar to the one pictured, gave its name to the virus. (Photo: Nick Hobgood / Flickr Commons)

Ebola: A Symptom of Economic Inequality

While the Ebola virus is spreading globally, its impact will mostly felt in the world’s poorer regions, especially Africa and the Asian subcontinent.
By Rob Prince | October 16, 2014

Of the many strands that, woven together, make up one of the world’s greatest rivers, the Congo, there is one which enters the river’s main waters as the great river arches to its most northern latitude. Starting from the southeast regions of what is today the Democratic Republic of the Congo, it first stretches almost due north, its main artery referred to as the Lualaba. A ways beyond Kisangani and Bumba, the main branch, fed by hundreds of tributaries, lurches almost due west, making a gentle west-north-west arch until, past the rapids just after Kinshasa, it tumbles dramatically to the ocean past Goma.

Near the northern most point of the Congo’s flow, a tributary merges in from the north just west of Lisala, the Mongala, a river that flows essentially longitudinally from north to south. Near the head waters of the Mongala, the Ebola, “a tributary of the tributary,” itself a 155 mile river, flows into the Mongala from the northeast adding to its volume and energy. At the point where the Mongala enters the Congo mainstream, the great river is flowing almost due west from the continent’s interior.

The Ebola River gave its name to viral disease which has now reach epidemic proportions in West Africa having, by official statistics already taken the lives of 5,000 people. As statistical analysis in Sub-Sahara Africa is far from precise, it is possible that the actual number of victims is quite higher and that frankly, there is no accurate estimate of how widely the disease has managed to extend its range. According to Pierre Piot, the Flemish (Dutch speaking Belgian) researcher who, in 1976 first identified the disease as a unique new pathogen, it is quite different from Marburg’s Virus with which it was first confused.

In an October 4, 2014 interview in The Guardian of London, (a translation of an article which first appeared in the German magazine Der Spiegel) Piot goes on to explain that the Ebola Virus actually did not originate along the Ebola River but among the Yambuku somewhat south of the Ebola River. Piot was working in a Belgian research lab at the time. When first handling the Ebola Virus he noted in The Guardian interview that “Of course it was clear to us that we were dealing with one of the deadliest infectious diseases the world had ever seen – and we had no idea that it was transmitted via bodily fluids!”

While there have been several outbreaks of Ebola in Central Africa, they were, until recently, only local and easily contained. While exact trajectory of the virus has not entirely been worked out, the main agents are certain species of African bats, who spread the condition to other animals, especially mammals, among them non-human primates. In the 1980s an anthropologist dissecting an Ebola-infected dead chimpanzee contracted the condition, indicating that it had once again mutated to jump to humans, much like the Asian Swine Flu.

For all that Ebola outbreaks were localized to a region between northeast Congo (Orientale Province) and what is now South Sudan. There have been several Ebola outbreaks in this region, including ones in 1977, 1998, and 2007 that killed hundreds at least. But this most recent outbreak is different. It moved from Central Africa to the West African Coast, a distance of several thousand miles. It has been more virulent, suggesting that the virus has, as viruses do, mutated into new more deadly forms.

As a number of informed commentators have noted, while the Ebola virus has started to spread globally, its impact will be felt in a much more pronounced manner in the world’s poorer regions, most especially Africa. With literally millions of people of Indian origin living especially along Africa’s eastern shores, there is also growing concern over the virus’ potential spread to the subcontinent. India has a long history of commercial relations with East Africa going back not just centuries, but millennia. These close ties continue up until today. While it has already spread to Europe and North America where isolated cases have emerged, it is far more likely that in the core countries of the global economy, that Ebola’s impact will likely be contained and limited in scope.

The fact of the matter is, as a recent World Health Organization article points out, that Ebola is an unequal opportunity killer. “The outbreak spotlights the dangers of the world’s growing social and economic inequalities. The rich get the best care. The poor are left to die.” The same article goes on to sketch how Ebola’s impact is magnified by social factors. Fear-mongering triggered by rumors and panic spread “even faster than the virus” amplifying social disruption and economic losses beyond the zone of contagion. As our world today is interconnected by many threads of commerce and family networks, it has become more difficult, if not virtually impossible anymore, to contain such a virus to a limited region putting the whole world at risk. There are some suggestions – including from a most recent Pentagon analysis of the impact of global warming, that among other things, global warming will increase the likelihood of more viral epidemics, infectious diseases, as new strains emerge, stimulated by the warmer global temperatures.

Furthermore, a half century or more after the wave of African independence freed the continent from most colonial rule, the healthcare delivery systems in many (if not most) African countries are in shambles, or completely nonexistent. Add to this base of neglect forty years of IMF structural adjustment policies which have repeatedly and systematically pressed poor African (and other) nations to cut government services and subsidies to medical drugs and education. Many African countries – certainly the Congo among them – spend far more on military equipment than they do on healthcare by a factor of 10 or even 20 to 1. And where war strikes as it has in the Congo over the past twenty years, what little health care might be available evaporates to naught leaving such regions medically fragile and susceptible to the kind of health ravages which the Ebola virus can rain down on human populations. Faced with a crisis like Ebola, African healthcare systems cannot cope; in fact they simply collapse. Due to a combination of these factors, medical resistance to disease collapses as well. There is a simple but accurate maxim here: deadly pathogens exploit weak healthcare systems. As the WHO article continues,

It is,…important to understand one point: these [human] deaths are not “collateral damage”. They are all part of the central problem: no fundamental public health infrastructures were in place, and this is what allowed the virus to spiral out of control.

There is one final ingredient to this toxic mix. Despite the fact that the Ebola virus was identified as a pathogen extremely dangerous to humans some forty years ago, there are virtually no cures, no vaccines. It is hard not to conclude that the reason for this lack of interest is that until now the disease has been confined only to poor African countries reducing the research and development incentive to zilch. Where the prospect of profit disappears, research dollars fizzle. It is the case that the World Health Organization has swung into action, finally with the full cooperation of the world’s core countries, and it is possible, or so they say, that vaccine antidote might be available by the end of the year. But then a number of epidemiologists interviewed on the mainstream media have admitted that, had the funding and political will been available, such a vaccine could have been available ten years ago.