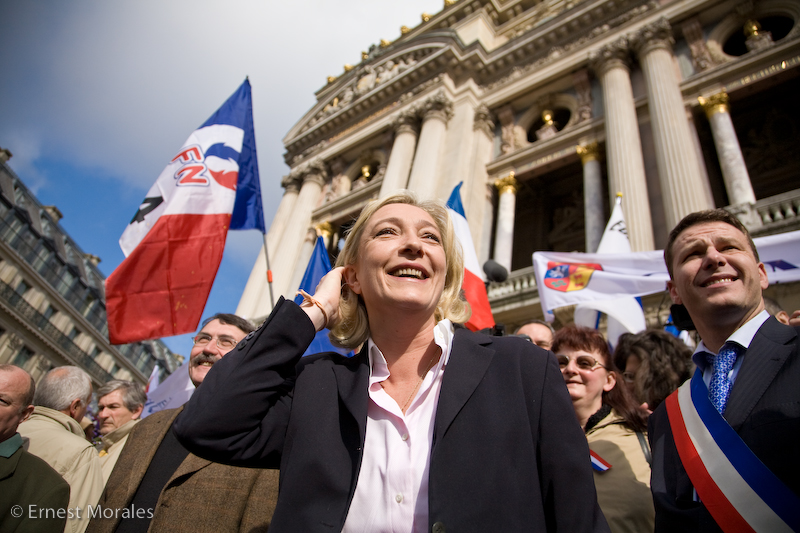 Marine Le Pen at a National Front rally in France. Coming off a stunning victory in the European Parliament elections, Le Pen is working to forge a far-right, anti-Europe coalition in the legislative body. (Photo: Ernest Morales / Flickr)

Nearly one-fifth of seats in the European Parliament will now be held by parties devoted to destroying it from within.
By Stefan Haus | June 5, 2014

On a Wednesday in late May, the week after Europeans from 28 different countries went to the polls to determine their representatives in the European Parliament, Marine Le Pen, leader of the France’s far-right National Front, appeared in the very city she has been fulminating against for years.

To her and many like-minded Europeans, Brussels has been the symbol of a malicious force that has slowly been creeping throughout the old continent, infringing on the sovereignty of its traditional and established nation-states. But now it was her time to come to Brussels—and to take the fight against the EU to the heart of the institution.

Although most observers had expected the far right to perform well in the elections, the sheer force with which anti-establishment parties rocked the European Union in late May sent shockwaves through the political elite and the mainstream media. The BBC called it a “euroskeptic earthquake,” as a ubiquitous fear that all the work toward the “ever closer union” envisioned since the 1950s was about to go to waste began making its rounds.

Although establishment parties are—for now at least—still calling the shots, the European Parliament will now include a huge contingent of parties devoted to its destruction.

Most recent reports indicate that a record 140 seats out of 751 will go to the far right.

The biggest winner was Marine Le Pen and her National Front, which won an astonishing 25 percent of the French vote—translating into 24 seats in parliament—and left former President Nikolas Sarkozy’s UMP in second and current President Francois Hollande’s Socialist Party in a remote third.

This result is not only unprecedented but would have been unthinkable just a few years ago. Just last month, Marine Le Pen’s father and founder of the National Front, Jean-Marie Le Pen, made headlines for expressing hope that the recent outbreak of Ebola in parts of Africa would reduce the number of potential immigrants to France. But Marine Le Pen has sought to mainstream the party, preserving its anti-immigrant agenda but focusing more on its anti-EU message and avoiding the overtly racist statements that her father is known for.

Another winner was Britain’s United Kingdom Independence Party, or UKIP, which left David Cameron’s Conservative Party and former Prime Minister Tony Blair’s Labor Party struggling for second and third place. Like the name suggests, UKIP’s agenda is focused on resisting European integration, yet anti-immigrant posturing remains at the center of its appeal. Nevertheless, UKIP leader Nigel Farage has been trying to shed the party’s image of hostility toward immigrants and is even refusing to coalesce with Le Pen’s National Front in the European Parliament, citing the French Party’s “racist and anti-Semitic roots.”

The Most Radical Winners

Among the most radical parties to set foot in the European legislature for the very first time is Greece’s Golden Dawn. The party’s leadership makes no secret of its fascist agenda, having promised to rid Greece of “filth” and to set up “Greek-only” food banks. Golden Dawn’s official spokesperson, Ilias Kasidiaris, proudly carries a swastika tattoo on his arm and made global headlines two years ago when he physically attacked two female political opponents on live television. All in all, 18 lawmakers from the party are facing criminal charges, yet Greece elected three of the party’s delegates to the European Parliament in Brussels.

Germany’s far-right National Democratic Party (NPD) was able to garner one seat in Brussels, a development that “horrified” Germany’s foreign minister Frank-Walter Steinmeier. Unlike Germany’s other anti-Europe party—Alternative for Germany (AFD), which secured seven seats and focuses primarily on ridding Germany of the euro—NPD has employed blatantly xenophobic campaign slogans like “money for granny instead of Sinti and Roma” and frequently refers to Europe as a continent for white people. Especially in a country with a history like Germany’s, such developments are reason for concern.

There are many more radical parties currently marching straight toward Brussels. Hungary’s Jobbik, for instance, has called for the country’s Jewish inhabitants to register in order to mitigate the “national security” risk posed by the “outside threat” that Jews represent. The party maintained its three seats in European legislature.

In the aftermath of the elections, nearly a fifth of the EU’s legislature will be in the hands of parties devoted to doing away with the very institution they are joining. Why?

Perhaps Europeans are sending a signal that European integration has gone too far or is proceeding too fast, or perhaps they are expressing their frustration with the still ongoing economic stagnation and recession in parts of the old continent.

Martin Haus of Germany’s Pirate Party, which won a seat promoting more transparency and Internet freedom, sees the problem as a mix of both. “We are very concerned by the number of people falling for the message of the right-wing populists. ‘Things were better in the good old days, before Europe’ is the main thrust of that message,” says Haus, who—full disclosure—happens to be my brother. “We Pirates disagree. We believe more Europe, not less, is the answer to the crisis.”

But not all Germans agree, and the skepticism is not limited to the far right. Even the satirical Die Partei, or The Party—known for its Saturday Night Live-style political parodies—won a seat in parliament. In his usual facetious tone, party leader Martin Sonneborn declared his intention to have the party’s delegate resign on a monthly basis to ensure that at least 60 members of the party get a chance to “visit Brussels and Strasbourg for a month while making 33,000 euros for doing so.” Clearly, Germans casting their vote for Die Partei are showing what they think of Brussels: it’s a joke.

But while officials have been working relentlessly to build legitimacy for the institution, the message sent by its electorate clearly does the opposite. If the EU isn’t taken seriously by its own people, it is questionable whether it can prevail in the long run.

For the time being, however, establishment parties are still calling the shots. The European Peoples Party (EEP) remains the strongest party and will most likely push its candidate—the former prime minister of Luxembourg, Jean-Claude Juncker—for commission president.

Nevertheless, if Marine Le Pen succeeds in forming a right-wing coalition out of the relatively disparate right-wing parties, she will qualify for additional funding, gain the right to lead negotiations on legislation, and secure speaking time to influence the decision-making process. To form a formal coalition, she’ll need least 25 lawmakers from seven different nations—a goal she is still struggling to achieve, but which many analysts think she may yet accomplish.

Geert Wilders of the Dutch Freedom Party once argued that Islam was the “Trojan Horse” of Europe, eroding European culture from the inside. But in reality, Marine Le Pen’s recent appearance in Brussels reveals the true Trojan Horse. If to “conquer France, destroy Europe” really has become the National Front’s goal, as former German foreign minister Joschka Fischer recently wrote, what better way to do it than from within?

For all we know, the horse has arrived.