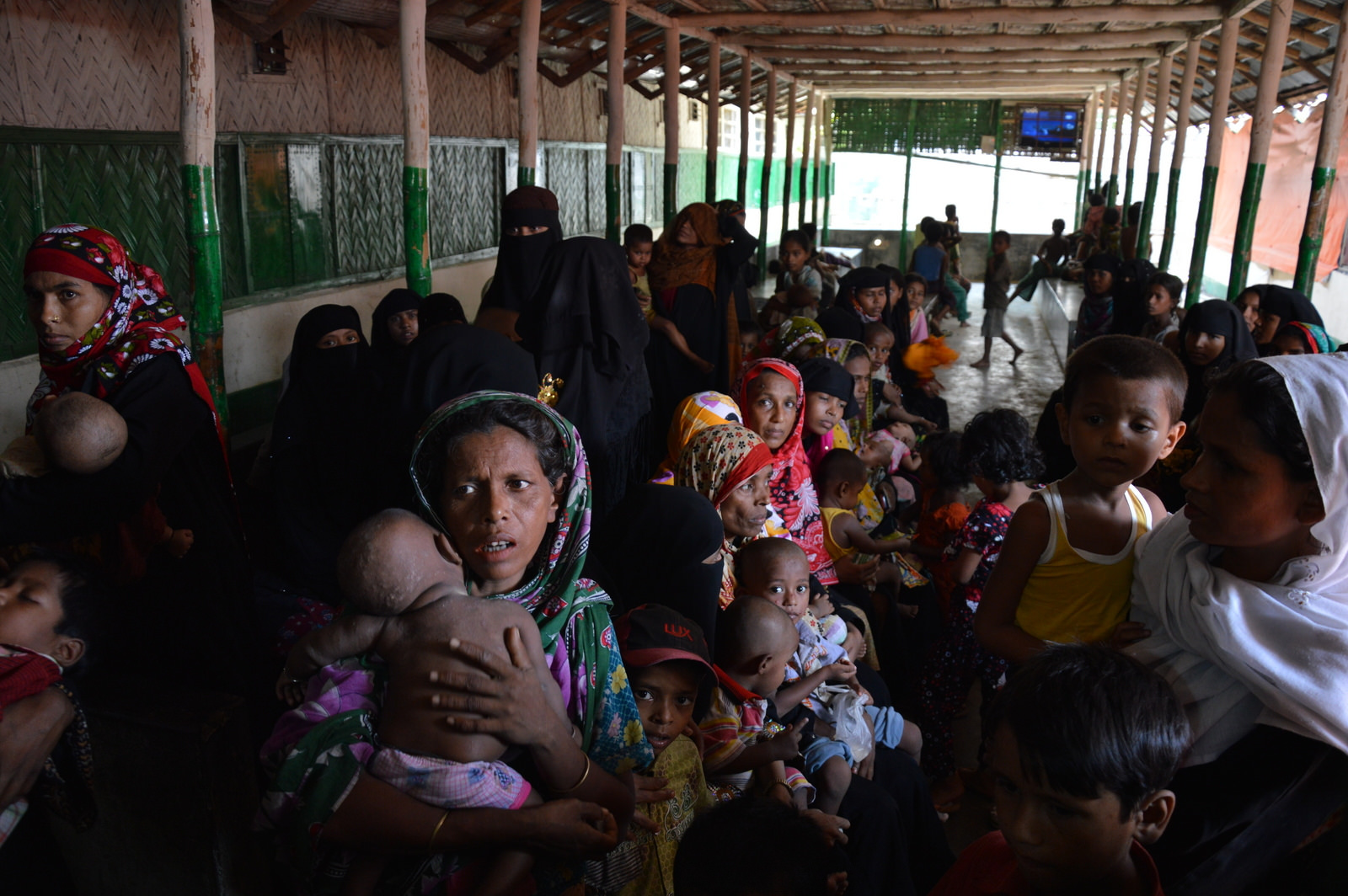 Flight of the Rohingya

Stateless refugees from Burma are risking death, rape, and drowning by the thousands on a risky escape to Malaysia.
By Daniel P. Sullivan | May 15, 2015

The names of the refugees below have been changed to protect their identities.

Imagine the choice between throwing your fate into the hands of notoriously abusive human traffickers or staying in a place facing the highest risk of genocide in the world. This is the choice faced by hundreds of thousands of people from the Rohingya minority in western Burma today.

The reality of their trials was brought to life for me recently in a crowded home of refugees in Malaysia, where an estimated 100,000 Rohingya have now fled. Each has a slightly different story, but the following accounts are fairly typical.

Salim, a 30-year-old fish and vegetable trader in western Burma, is detained by local authorities and beaten — not for any crime, but for choosing to self-identify as a “Rohingya” during the 2014 census. The government of Burma denies the existence of Rohingya, choosing to label them as undocumented “Bengalis” from neighboring Bangladesh, despite the fact that many Rohingya can trace their origins in Burma back several generations. Local authorities tell Salim he has a choice: He can either pay for passage out of the country or face the risk of death.

Bibi Khadija, 20, and her husband worry about the lack of food, medicine, and education for their children in the displacement camps they’re forced to live in.

Some 150,000 Rohingya in western Burma have fled their homes since violent clashes erupted between local Rakhine Buddhists and Muslim Rohingya in 2012, disproportionately affecting Rohingya. They’ve been forced by the government to live in displacement camps that have been described as open-air prisons. Stories spread throughout the camps of the promise of a better life in Malaysia, encouraging Bibi Khadija to approach the well-known “agent” in their camp. There’s such an agent in every camp, more than willing to help — for a price, typically the equivalent of $100 to $200.

Not far from the city of Sittwe, a small boat takes Bibi Khadija, her husband, and their two small children out to a larger boat with some 200 other Rohingya. Many of the ships are much larger, containing more than 1,000 passengers. Armed human traffickers typically overcrowd the ships and deny the passengers adequate food and water. The voyage is usually seven to ten days but can vary considerably.

Bibi Khadija and her family will be at sea for 33 days. Five people will die from starvation along the way.

Another boat takes off near the Bangladesh border holding Salim and nearly 700 other Rohingya. He witnesses the armed traffickers strike anyone who asks for water over the head with iron rods. Nine will succumb to the beatings and be dumped into the sea along the way. Four others will die of starvation. 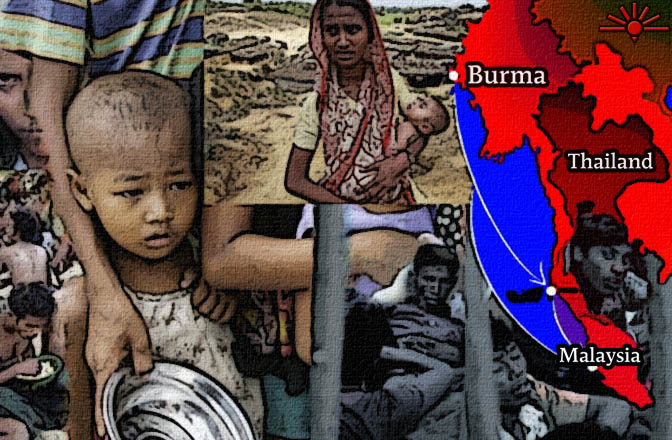 Stage 3: Hell in the Jungle

After over a month at sea, Bibi Khadija and her family arrive in Thailand and are forced to march for two days and two nights, deep into the jungle. They will remain there in a trafficker camp with hundreds of others for more than three months. There are thousands of Rohingya in dozens of camps in Thailand, described as “tropical gulags” in a Pulitzer Prize-winning Reuters report from a few years back. Once they arrive, the women and children are separated from the men.

The men find out the money they paid at the beginning of the trip does not apply here. They’re beaten daily until they can get word to relatives to pay between $1,000 and $2,000 for their freedom. If after six or seven months no money arrives, they’re beaten and discarded or sold to rubber plantation owners.

Salim describes living with some 800 other people under a leaky plastic sheet and surviving off daily rations of just a little bit of rice. After several months, he’s able to reach relatives who pay for his release.

For the women it’s often worse. Salim tells of a beautiful woman he traveled with who was sold into prostitution. Sex trafficking is an all too common fate for the Rohingya refugees.

Sitting before Bibi Kadijah, the reality of the horror comes shockingly clear. She averts her eyes, revealing in a near whisper that she’d been raped by the traffickers. A dark mass of broken blood vessels covering the left side of her face bears testament to the recentness of the traumatic experience. Sexual assault is another all too real and all too common fate for the women who take the voyage.

After months in the traffickers’ camp, Salim is able to get word to family members in Malaysia, who send nearly $2,000 for his release. He’s been in Malaysia for two months now but has lost contact with his brother, who will remain in the hands of the traffickers until he can get word to his family. “I am ready to pay,” he tells me. “I just need to hear from him.”

In Malaysia, Salim finds a network of support from other Rohingya exiles, but faces the daily threat of detention as an illegal immigrant or exploitation by corrupt authorities who demand bribes. A spokeswoman for the office of the UN High Commissioner for Refugees has said it receives “regular reports of abuse, intimidation, and exploitation of Rohingya refugees” in Malaysia.

Bibi Khadijah and her family arrived in Malaysia just days ago. They now share a small house with two other Rohingya families — a total of 16 people sharing three rooms, one kitchen, and one bathroom. They face severe challenges in obtaining education and health attention. And like Salim, they live with the daily threat of detention.

The people I meet in Malaysia are the lucky ones. They have family who were able to pay for their freedom or were fortunate to escape when a police raid scattered the traffickers. There is a community of support here and a government that, while not exactly welcoming, does not seem intent on their eradication.

As one aid worker helping the Rohingya tells me, there is much that needs to be done to help the Rohingya in Malaysia, but the ultimate solution to this crisis must be in Burma. The government in Burma must recognize the Rohingya as a people with rights and hold accountable anyone who would persecute them.

As I absorb the stories of these various families, I ask each a final question: Given all of the dangers they’ve risked, from drowning to rape and beatings, would they recommend the journey to those still in Burma?

Without hesitation, they all answer yes.

Dan Sullivan is the Director of Policy and Government Relations at United to End Genocide.

In the days since Dan returned, the situation has greatly deteriorated. Mass graves have been found in the Thai jungle trafficking camps and a crackdown by authorities has caused traffickers to abandon thousands of Rohingya at sea. Immediate action is needed to save their lives. To join the call for action go to www.endgenocide.org.