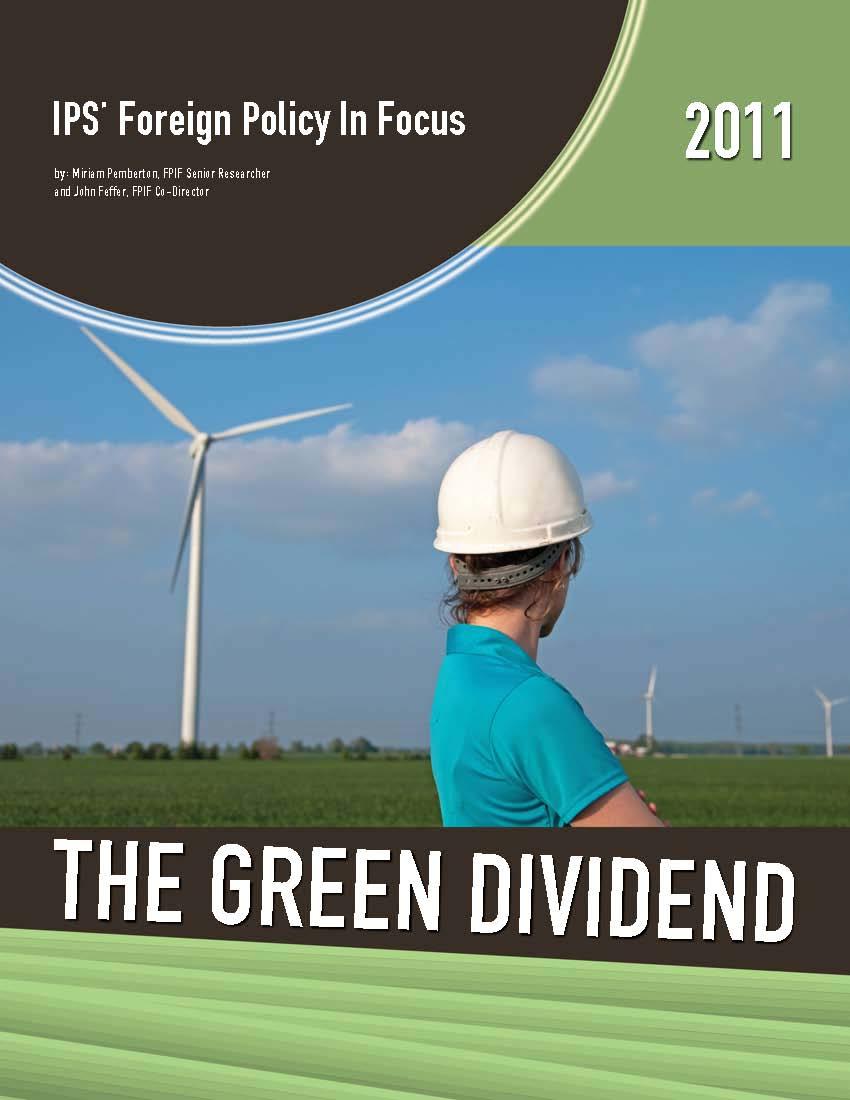 The United States failed to capitalize on a Peace Dividend. Now, with the economy in a rut and the globe heating up, we have a second chance to shift Pentagon funds to domestic needs with a Green Dividend.
By John Feffer, Miriam Pemberton | September 30, 2010 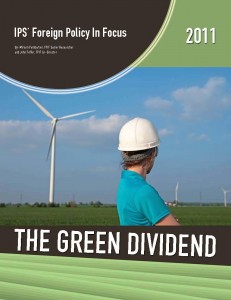 The second engine, to be built by General Electric and Rolls Royce, represents jobs, and U.S. politicians have a difficult time saying no to jobs. Even Rep. Barney Frank (D-MA), who has taken the most courageous stand against military spending by calling for a 25 percent reduction in the Pentagon budget, voted in favor of the backup engine because it meant jobs at the GE plant in his state.2 This was no isolated example. It repeated a pattern from 2009 when the president, the Pentagon, and even the defense contractor Lockheed Martin teamed up to remove funding for the F-22 fighter jet from the budget only for the House to restore the money (the item eventually was dropped during the reconciliation process).

It has never been easy to cut U.S. military spending. Even after the end of the Cold War, which had sustained military spending at unprecedented levels, it was difficult to persuade military contractors to take up a different line of work. The Clinton administration made sure to provide new export markets for defense contractors who were losing U.S. government work. U.S. military exports skyrocketed from under the leadership of Ron Brown in the Commerce Department.3 The “peace dividend” evaporated as the military budget resumed its upward climb in the second half of the 1990s before increasing dramatically during the George W. Bush administration.

But a decade into the 21st century, the United States faces another key opportunity—if we understand crisis as the midwife to opportunity—to shift resources from the military sector to meet the other pressing needs of the country and the world. The United States remains mired in an economic recession. We face the twin threats of the energy and climate crises. Huge sums of money are required to fix our health care system, revive our educational system, and repair our infrastructure.

The obvious solution is to reduce military spending and apply those savings to a green technology initiative that reduces our dependency on fossil fuels, shrinks our carbon footprint, and creates jobs. Such a “green stimulus” could pull our economy out of recession. Other countries have pursued something similar. Both China and South Korea, two countries with very different political and economic systems, have backed “green growth.” And, indeed, the Obama administration made such funds a feature of the original stimulus package and also created a position of “green jobs” czar.

But so far the United States has only pursued half-measures. The “obvious solution” is not so obvious to defense contractors worried about losing contracts—and unions and workers worried about losing existing jobs—all in exchange for the promise of a different kind of manufacturing. Politicians who might ordinarily back the “obvious solution” are reluctant to be seen as anti-job. The promise of a green job has a hard time competing with the reality of an existing military job. And instead of a “green growth” narrative, the country has essentially bought a very different story—of the Pentagon helping a foundering U.S. economy by providing essential jobs.

In this report, we will show that many of the elements of this “obvious solution” are already in place. There is an extensive literature on the virtues and experiences of the successful conversion of military-oriented manufacturing. The institutions that might perhaps be most resistant to change—the Pentagon and the nuclear labs of the Department of Energy—have begun to shift toward energy sustainability. The Obama administration has begun to lay the groundwork for a profound shift in budget priorities.

This report will describe these important and exciting shifts. But it will also identify the key missing piece, the factor that has thus far made the “obvious solution” politically unlikely. Until we figure out how to shift jobs from the military sector to the “green growth” sector, fiascos like the F-35 engine and the F-22 fighter will continue to paralyze any efforts to meaningfully reduce military spending. In this report, we will discuss how to play matchmaker and marry defense sector workers to green technology jobs, using Hartford, Connecticut (the home of Pratt & Whitney) as our example.
Combining the existing track record on conversion and the ongoing efforts inside the Pentagon, the DOE, and the White House with this district-level focus on jobs, we will transform our green dividend proposal from an obvious solution into a workable one.