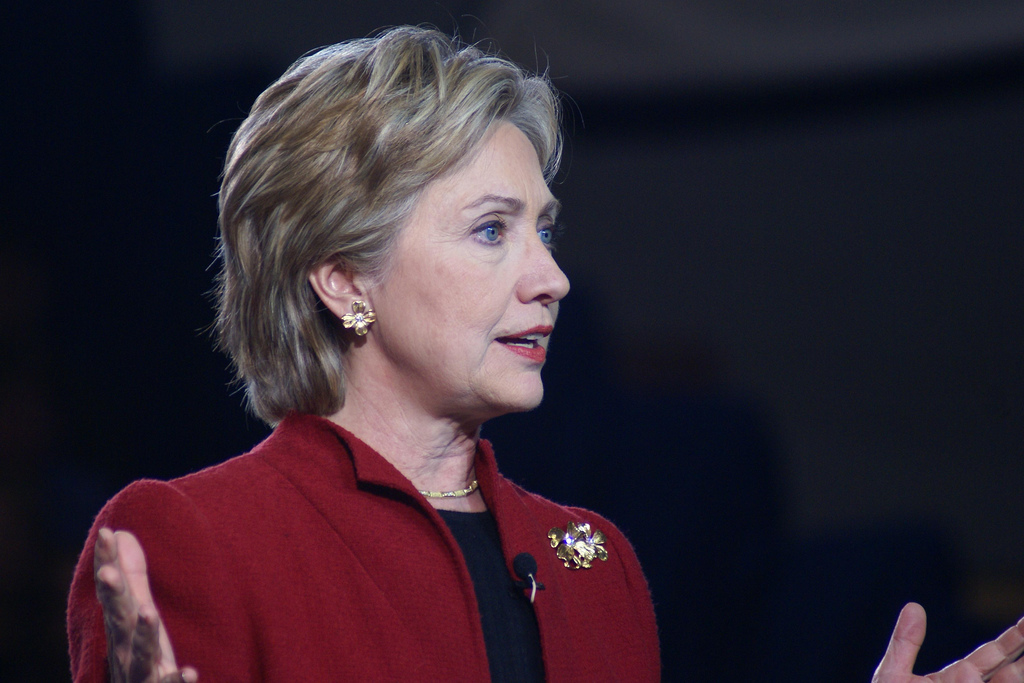 The former secretary of state could shatter the glass ceiling for women, but she'd leave the old boys' military-industrial complex intact.
By Medea Benjamin | November 3, 2015

As the first Democratic presidential debate drew to a close, moderator Anderson Cooper posed a question to Hillary Clinton: How might her presidency differ from Barack Obama’s?

Clinton smiled. “Well, I think it’s pretty obvious,” she replied to rapturous applause. “Being the first woman president would be quite a change from the presidents we’ve had.”

Indeed, a Hillary Clinton presidency would shatter the glass ceiling for women in the United States. But it would also leave intact the old boys’ military-industrial complex that’s kept our nation in a perpetual state of war for decades.

Clinton, it seems, failed to learn anything after supporting the disastrous Iraq War, which plunged a huge swath of the Middle East into chaos and cost her the 2008 Democratic presidential nomination. Instead of embracing diplomacy, she continued to champion ill-conceived military interventions as secretary of state.

In 2011, when the Arab Spring came to Libya, Clinton was the Obama administration’s most forceful advocate for intervening to overthrow Muammar Gaddafi. She even out-hawked Robert Gates, the Pentagon chief first appointed by George W. Bush who was less than enthusiastic about going to war in Libya.

Ironically, the political grief Clinton has suffered over the subsequent attack on a U.S. diplomatic outpost in Benghazi, which killed four Americans, might never have occurred if Clinton had opted against intervening in Libya’s civil war.

While House Republicans recently spent 11 hours relentlessly drilling Clinton about Benghazi and her personal email account, the larger disaster by far is the postwar chaos that’s left Libya without a functioning government, overrun by feuding warlords and extremist militants.

Clinton favors greater military intervention in Syria’s civil war, too. In her presidential bid, she’s joined hawkish Republican senators like John McCain and Lindsey Graham in supporting the creation of a no-fly zone over the country.

That puts her at odds not only with President Barack Obama, but also with her Democratic presidential rival Bernie Sanders, who warned that it could “get us more deeply involved in that horrible civil war and lead to a never-ending U.S. entanglement in that region.”

Clinton did end up supporting the administration’s Iran nuclear deal, but her support came with a history of bellicose baggage.

Back in 2008, for example, she warned that Washington could “totally obliterate“ Iran. During that presidential campaign, she chided Obama as “naïve” and “irresponsible” for wanting to engage the country diplomatically.

Even after the nuclear agreement was sealed, she struck a bullying tone: “I don’t believe Iran is our partner in this agreement,” Clinton insisted. “Iran is the subject of the agreement.” She added that she “won’t hesitate to take military action” if it falls through.

There was a very telling moment about Clinton’s attitude during the debate when Cooper asked, “Which enemy are you most proud of?”

Alongside the NRA, Republicans, and health insurance companies, Clinton listed “the Iranians” — which could mean either the Iranian government or the nation’s 78 million people. In either case, it wasn’t a very diplomatic thing to say while her successor and former colleagues are trying to chart a new, more cooperative relationship with Iran.

When it comes to war and peace, it might not matter too much if a Republican or Hillary Clinton wins the White House. In either case, the winner will be the military-industrial complex President Dwight D. Eisenhower warned us about.

Medea Benjamin, the founder of CODEPINK and Global Exchange, is the author ofDrone Warfare: Killing by Remote Control.