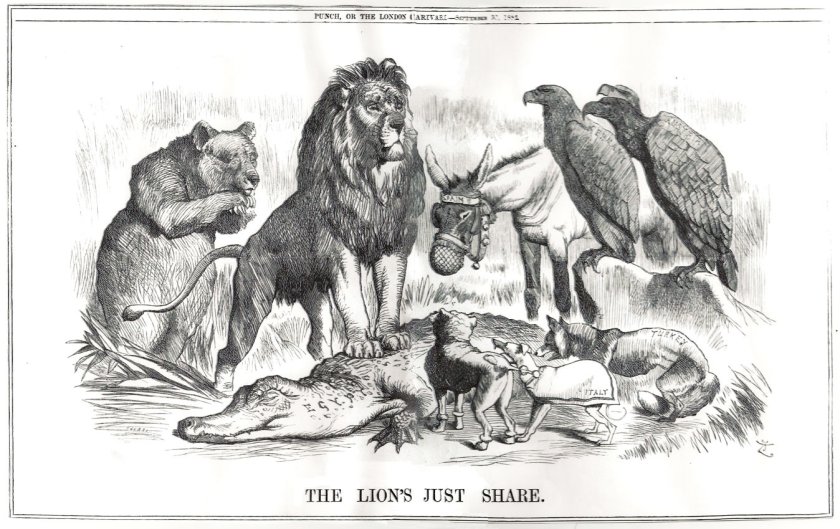 A 19th-century cartoon skewers British imperialism in the Middle East. The current tumult in the region today is a direct result of the arbitrary boundaries and divide-and-rule tactics employed by the imperial British and French. (Image: Middle East Cartoon History)

ISIS: The Spoils of the “Great Loot” in the Middle East

Adding yet more warfare to the current crisis in the Middle East will perpetuate exactly what the imperial powers set out to do: tear an entire region of the world asunder.
By Conn Hallinan | July 1, 2014

It was a curious comment by the oddball but unarguably brilliant British agent and scholar, Thomas Edward Lawrence. The time was World War I, and England and France were locked in a death match with the Triple Alliance, of which Ottoman Turkey was a prominent member. But it was nonetheless true, and no less now than then. In the Middle East, to paraphrase William Faulkner, history is not the past; it’s the present.

In his 1915 letter, Lawrence was describing French machinations over Syria, but he could just as well have been commenting on England’s designs in the region, which Allied leaders in World War I came to call “The Great Loot”—the imperial vivisection of the Middle East.

As Iraq tumbles into a yet another civil war, it is important to remember how all this came about, and why adding yet more warfare to the current crisis will perpetuate exactly what the “Great Loot” set out to do: tear an entire region of the world asunder.

There is a scorecard here filled with names, but they are not just George W. Bush, Dick Cheney, Donald Rumsfeld, and Condoleezza Rice—though the latter helped mightily to fuel the latest explosion.

They are names most people have never heard of, like Sixth Baronet of Sledmere Mark Sykes and French diplomat Francois Georges-Picot. In 1915, these two mid-level diplomats created a secret plan to divvy up the Middle East. Almost a century later that imperial map not only defines the region and most of the players, but continues to spin out tragedy after tragedy, like some grotesque, historical Groundhog Day.

In 1915, the imperial powers’ major goal in the Middle East was to smother any expression of Arab nationalism and prevent any unified resistance to the designs of Paris and London. France wanted Greater Syria, Britain control of the land bridges to India. The competition was so intense that even while hundreds of thousands of French and British troops were dying on the Western Front, their secret services were blackguarding one another from Samarra to Medina, maneuvering for position for when the Ottoman Empire finally collapsed.

The Sykes-Picot Agreement was the compromise aimed at ending the internecine warfare. France would get Greater Syria (which it would divide to create Lebanon), plus zones of influence in northern Iraq. Britain would get the rest of Iraq and Jordan and establish the Palestine Mandate. All of this, however, had to be kept secret from the locals, whom the British and French incited to rebel against imperial Ottoman rule even as they plotted to impose their own.

The Arabs thought they were fighting for independence, but London and Paris had other designs. Instead of the lands between the Tigris and Euphrates rivers and access to the Mediterranean the Arabs had been promised, they would get the sun-blasted deserts of Arabia and the rule of monarchs, who were easy to buy or bully.

However, to run such a vast enterprise through the use of direct force was beyond the power of even London and Paris. So both empires transplanted their strategies of exploiting religion, sect, tribe, and ethnicity—which had worked so well in Indochina, India, Ireland, and Africa—to divide and conquer, adding to it a dash of chaos.

The French put the minority Christians in charge of Lebanon to keep down the majority Sunnis and Shiites. They recruited the minority Alawite Shiites in Syria to head up the army that ruled over the majority Sunnis, while the British installed a Sunni king in Iraq to rule over the country’s majority Shiites. In Palestine the British used Zionism much as they were using Protestantism in Northern Ireland to keep down the native Catholic Irish and keep both communities divided. Communities ended up fighting one another rather than their imperial masters, which, of course, was the whole point of the matter.

Now those demons are on the loose.

Names on the Ledger

There are new players in the Middle East since Sykes and Picot drew up their agreement. Washington and Israel were latecomers, but eventually replaced both imperial powers as the major military forces in the region.

The enemy of the “Great Loot” was secular nationalism, and the United States, France, and Britain have been trying to overthrow, isolate, or co-opt secular regimes in Iraq, Syria, Egypt, and Libya since they first appeared. The rationale for the hostility is that secular regimes were run by dictators. Many have been, but they’re arguably no worse than the Wahhabi fanatics in Saudi Arabia or the monsters the Gulf monarchies have nurtured in Syria and northern Iraq.

Why is Syria a dictatorship when Saudi Arabia is not? This past February, the kingdom passed a law equating anything offends “the nation’s reputation or its position”—including dissent, the exposure of corruption, and campaigns for reform—with “terrorism.”

The list of names on the ledger of those who nurture terrorism in the Middle East is long. Yes, it certainly includes the Bush administration, which smashed up one of the most developed countries in the region, dismantled the Iraqi state, and stoked the division between Sunni and Shiites. But also the Clinton administration, whose brutal sanctions impoverished Iraq and eviscerated its middle class. And further back, during the first Gulf War, George H. W. Bush pounded southern Iraq with toxic depleted uranium, inflicting a massive cancer epidemic on places like Basra. It was Jimmy Carter and the CIA who backed Saddam Hussein’s rise to power, because the Ba’athist dictator was particularly efficient at torturing and killing trade unionists and members of the Iraqi left.

Not to mention members of the Gulf Cooperation Council—Kuwait, Saudi Arabia, Oman, the United Arab Emirates, Qatar, Bahrain, Morocco, and Jordan—who fund the Islamic insurgency in Syria. Some of those countries may decry the excesses of the Islamic State of Syria and the Levant (ISIL), but it was they who stoked the fires in which ISIL was forged.

Turkish Prime Minister Recep Tayyip Erdogan is also on that list. It is through Turkey’s borders that most fighters and supplies pass into Syria. So is the Obama administration, which farmed the insurgency out to Qatar and Saudi Arabia and is now horrified by the creatures that those Wahhabist feudal monarchies produced.

Paris has never forgiven the Syrians for tossing them out in 1946, nor for Damascus’ role in the 1975-1990 Lebanese civil war that dethroned the French-favored Christian minority who had dominated the country since its formation in 1943.

The French have been enthusiastic supporters of the insurgency in the Syrian civil war and, along with the British, successfully lobbied the European Union to drop its ban on supplying the rebels with military hardware. Paris has also earned favor from Saudi Arabia by trying to derail efforts to find a solution to the conflict over Iran’s nuclear program. France is a member of the group of powers known as the P5+1—France, the United States, Russia, Britain, China, and Germany—involved in talks with Tehran.

The Gulf Council praised France’s attempted sabotage, and Paris promptly landed a $6-billion contract to upgrade Saudi Arabia’s air defense system. It is negotiating to sell $8 billion worth of fighter-bombers to the Emirates and almost $10 billion worth to Qatar.

Saudi Arabia recently donated $3 billion in aid to the Lebanese Army on the condition that it is used to buy French weapons and ammunition. It is a somewhat ironic gift, since the major foe of the Lebanese Army lately has been Saudi-supported Wahhabists in the country’s northern city of Tripoli.

And that’s not all. Apparently French President Francois Hollande met with the foreign ministers of Jordan and the United Arab Emirates last September to discuss a plan for Pakistan to train a 50,000-man Sunni army to overthrow the Syrian government and defeat al-Qaeda-affiliated jihadist groups.

Members of that army may already be on their way to Europe, much as the mujahedeen from Afghanistan did a generation ago. According to western intelligence services, more than 3,000 European Union citizens have gone to fight in Syria—10 times the number who went to fight the Soviets in Afghanistan. The gunman who killed four people on May 24 at the Jewish Museum in Brussels was a veteran jihadist from the Syrian civil war.

For now, the Gulf monarchies see themselves as pulling the strings, but they have virtually no control over what they have wrought. Those Wahhabi fanatics in Syria and northern Iraq may do what Osama bin Laden did and target the corruption of the monarchies next.

The Gulf countries are rich but fragile. Youth unemployment in Saudi Arabia is between 30 and 40 percent, and half the country’s 28 million people are under 25 years of age. In other Gulf nations a tiny strata of superrich rule over a huge and exploited foreign workforce. When the monarchies begin to unravel, the current chaos will look like the Pax Romana.

But chaos has always been an ally of imperialism. “The agenda has always been about imposing division and chaos on the Arab world,” wrote long-time peace activist Tom Hayden. “In 1992, Bernard Lewis, a major Middle East expert, wrote that if the central power is sufficiently weakened, there is no real civil society to hold the polity together, no real sense of common identity…the state then disintegrates into a chaos of squabbling, feuding, fighting sects, tribes, regions, and parties.” And that is just the kind of disintegration that foreign powers have sought to exploit.

Military intervention by the United States and its allies will accelerate the divisions in the Middle East. If the White House is serious about stemming the chaos, it should stop fueling the Syrian civil war, lean on the Gulf monarchies to end their sectarian jihad against Shiites, pressure the Israelis to settle with the Palestinians, and end the campaign to isolate Iran.

And tell the French to butt out.