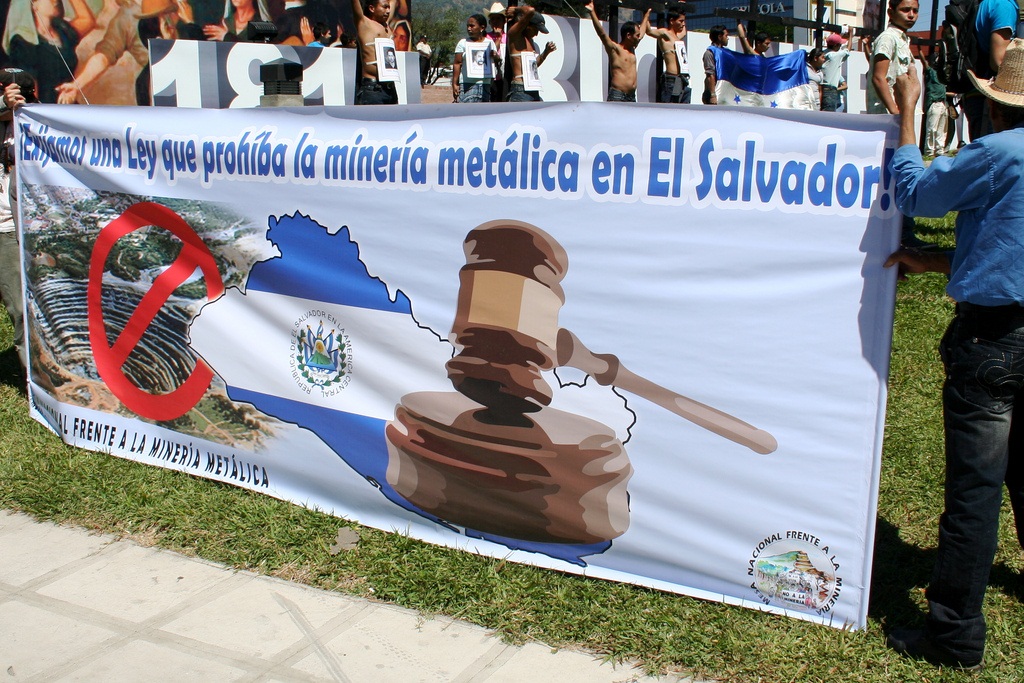 Salvadorans protest in favor of a ban on all mineral mining. (Photo: laurizza / Flickr)

In an obscure World Bank court, a multinational mining firm is suing El Salvador for attempting to protect its citizens from deadly mining pollution.
By Robin Broad, John Cavanagh | September 3, 2014

An obscure tribunal housed at the World Bank in Washington, D.C. will soon decide the fate of millions of people.

At issue is whether a government should be punished for refusing to let a foreign mining company operate because it wants to protect its main source of water.

The case pits El Salvador’s government against a Canadian gold-mining company that recently became part of a larger Australian-based corporation. When OceanaGold bought Pacific Rim last year, it identified the Salvadoran mining prospects as a key asset, even though gold prices have sunk by more than a third from their 2011 high of more than $1,900 an ounce.

The case’s implications are chilling. If the company wins, this small country will have to either let the company mine or pay hundreds of millions of dollars.

This summer, we returned to northern El Salvador. That’s where the Pacific Rim mining company started to dig its exploration wells about a decade ago.

Near that disputed mining site, local resident Vidalina Morales explained how she and others came to oppose mining: “At first, we thought mining was going to help us out of poverty through jobs.”

But, she said, during a visit to a mine in neighboring Honduras, “we saw polluted rivers and people with bad skin diseases, and we learned about the social conflicts that mining brought between those working in the mine and those in the community.”

Morales and a majority of the local people became increasingly concerned about toxic cyanide from mining entering the watershed of the Rio Lempa. The huge river provides water to over half of El Salvador’s population.

And so, as Morales stressed, people said “yes to life and no to mining.”

This has become a national slogan. Nearly 90 percent of local landholders refused to sell their land to Pacific Rim, a requirement for a mining license in El Salvador. At least four local people who were against mining were killed under suspicious circumstances as the conflict over mining deepened. The killings only intensified the anti-mining resolve.

Then, in an act of democratic accountability, the Salvadoran government listened to its constituents and refused to approve the corporation’s inadequate environmental impact assessment. Indeed, three successive presidents of El Salvador have refused to approve this or any gold-mining license.

El Salvador’s government and people could not be clearer. They have rejected this ill-fated mine. Yet the saga continues.

Thanks to trade and investment laws that the United States has championed in recent decades, corporations can sue governments if they perceive that government actions threaten their future profits. They typically sue in a little-known tribunal with a very long name: the International Centre for Settlement of Investment Disputes, part of the World Bank Group in Washington.

And so Pacific Rim sued the Salvadoran government for over $300 million even though the company never had an actual license to conduct anything more than preliminary mining exploration.

A panel of three arbitrators will hear this case starting September 15. They aren’t required to follow legal precedents. Nor will the September proceedings be made public. One tribunal insider, lawyer George Kahale, recently decried the investment agreements that have empowered hundreds of corporations to pursue these cases as “weapons of legal destruction.”

The fact that this lawsuit is going forward, never mind that El Salvador could lose, baffles Vidalina Morales and her neighbors in northern El Salvador. It also troubles top government officials in San Salvador.

As they continually stressed to us, their country can’t afford the hundreds of millions of dollars it will be forced to pay if they lose the suit. Nor can their distressed watershed bear the costs of mining.

Robin Broad is a professor at American University’s School of International Service. John Cavanagh directs the Institute for Policy Studies.