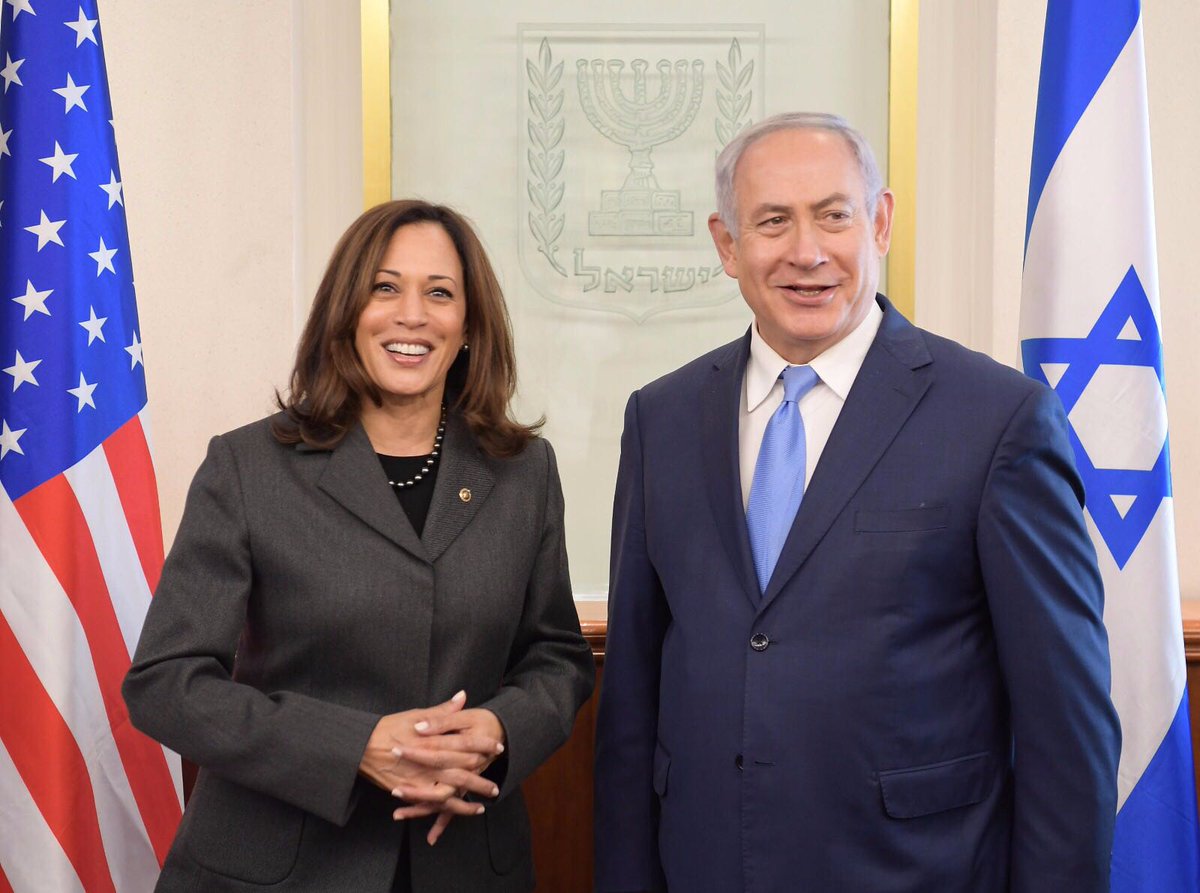 The California senator's hardline positions on Israel-Palestine point to a dangerous disregard for international law.
By Stephen Zunes | January 28, 2019

Harris is being embraced by many progressive Democrats, and she’s branding herself as a progressive. Yet in the course of her little more than two years in the U.S. Senate, she’s taken some foreign policy positions that should give pause to supporters of human rights and international law.

In her very first foreign policy vote in January 2017, for instance, Harris sided with President Trump in criticizing the outgoing President Obama’s refusal to veto an otherwise-unanimous, very modest, and largely symbolic UN Security Council resolution on Israeli settlements. Among other things, that resolution reiterated previous Security Council calls for Israel to stop expanding its illegal settlements in the occupied West Bank, which violate the Fourth Geneva Convention and a landmark ruling by the International Court of Justice.

The Senate resolution, on the other hand — which Harris herself co-sponsored — challenged the right of the United Nations to weigh in on questions of international humanitarian law in territories under foreign belligerent occupation.

The Security Council resolution called on both the Israeli and Palestinian governments to prevent violence against civilians, condemn and combat terrorism, refrain from inciting violence, and comply with their obligations under international law. But Harris’s resolution called the UN version “one-sided,” and effectively equated opposition to the illegal colonization drive by Israel’s right-wing government with opposition to Israel itself.

Harris’s measure also appeared to argue that Obama’s decision to abstain on the UN resolution somehow undermines the Oslo Accords for an eventual two-state solution. Mysteriously, according to Harris, Israeli Prime Minister Benjamin Netanyahu’s expansion of settlements to the point that the establishment of viable contiguous Palestinian states alongside Israel is no longer possible does not.

Harris insists that the United Nations should not have any role regarding Israel and Palestine. Her resolution asserts that the issue of these illegal settlements should be decided only through U.S.-sponsored “direct talks” between the Palestinians under occupation and their Israeli occupiers. Not only has Kamala Harris’s strategy not worked (since this has been U.S. policy for 25 years, during which the settlements have quadrupled), but Trump’s appointees focusing on the negotiations are all strong supporters of Israeli occupation and settlements and oppose Palestinian statehood.

On the 50th anniversary of Israel’s 1967 conquest of neighboring Arab territories, Harris supported another Senate resolution celebrating the Israeli occupation of East Jerusalem. As an apparent effort to discredit reports by human rights groups critical of Israeli treatment of non-Jewish residents in the city, the resolution praised Israel for ensuring that the rights of Muslim and Christian Palestinians were “respected and protected.”

Though professing to support a two-state solution, Harris has repeatedly refused to make any distinction between criticisms of the Israeli occupation and colonization in the West Bank and attacks on Israel itself.

She’s accused campaigns supporting boycotts and divestment targeting the Israeli occupation of anti-Semitism, and she claims that efforts in the United Nations to pressure the Netanyahu government to end its violations of international humanitarian law are actually designed to “delegitimize Israel.” She even signed a letter criticizing the United Nations and its agencies for such efforts which commended Trump’s former UN Ambassador Nicki Haley’s attacks on the world body.

Harris insists that lasting peace can only take place if the Palestinians not only uphold their recognition and security guarantees to Israel, but explicitly recognize Israel as “Jewish state,” a requirement not made of Egypt and Jordan in their peace agreements. Indeed, there appears to have never been a peace treaty in which recognition of a country’s ethnic or religious identity has been a requirement for ending a conflict, particularly by those who are discriminated against by virtue of such an identity.

By adding this condition to the peace process, which even the most moderate Palestinian leader would be unable to support, she appears to be attempting to place the blame for the lack of negotiated settlement on those under Israeli occupation.

At some point or another, most Democratic senators have supported pro-Israel resolutions and made statements regarding the Israeli-Palestinian conflict that have left supporters of human rights and international law disappointed.

Harris, however, goes well beyond the perfunctory pro-Israel positions so common in Washington.

For example, The Intercept reports: “Unlike some of her counterparts in the Senate, she has not publicly made any demands of Israel or Netanyahu regarding the human rights of Palestinians.” In another case, she refused to join fellow Democratic senators and presidential aspirants like Bernie Sanders and Elizabeth Warren in signing a letter to Netanyahu demanding a halt to the impending demolition of a Palestinian village. Nor has she joined Sanders and Warren in criticizing Israel’s excessive use of lethal force against Palestinians in the besieged Gaza Strip.

Despite damning reports on Israeli repression against Arabs in both the West Bank and Israeli proper — reports made by international human rights organizations like Amnesty International and Human rights Watch, as well as by Israeli human rights groups like B’Tselem and Breaking the Silence — Harris has lionized Israel as being a “beautiful home to democracy and justice.”

While most Democrats today ally more with the moderate pro-Israel group J Street rather than the hardline AIPAC, which has generally backed Republicans in recent years, Harris has been virtually the only Democrat to appear before the right-wing pro-Netanyahu organization each year since being elected to the Senate. Indeed, as the Jewish Telegraph Agency observed, her record demonstrates that “She’s more AIPAC than J Street.”

The Right of Conquest

It is not unusual for otherwise progressive members of Congress to have a blind spot when it comes to Israel and Palestine. However, Harris views are not only particularly extreme and dangerous, but may be indicative of a wider contempt for human rights and international law in her foreign policy views overall.

It’s important to note that Harris’s views aren’t necessarily worse than some other Democratic contenders for the nomination, including Cory Booker and Kristen Gillibrand. However, those senators are already seen as suspect by progressive party activists as a result of their centrist policies on a number of issues, whereas Harris appears to have created more of a buzz on the party’s left, most of whom are unaware of her foreign policy views.

Harris claims to support a two-state solution, yet in practice she has given no indication that she would be willing to take any steps to make that possible. Indeed, she has supported policies that would make such a settlement impossible.

By rejecting any role for the United Nations or the relevance of international humanitarian law in occupied territories, and by insisting that such questions should only be resolved through voluntary agreement of the occupying power, Harris is effectively giving license to aggressors worldwide to conquer and occupy their neighbors with impunity. She appears to embrace a neoconservative worldview which supports the right of conquest and rejects international law, including the inadmissibility of countries expanding their territory by force and colonizing these conquered territories with their citizens.

If Harris’s position on Israel and Palestine is indeed reflective of her overall world view, she is therefore essentially endorsing the right of conquest over the right of self-determination.  It raises the questions as to whether, had she been in office in the 1950s, she would have defended the right of the French to colonize Algeria and the British to colonize Kenya and Rhodesia, and opposed any efforts by the United Nations in decolonization.

Given the broader implications of Harris’s hardline positions regarding Israel and Palestine, they should not go unchallenged. Given how she has only begun to address foreign policy issues since coming to the U.S. Senate two years ago, perhaps her views are somewhat malleable. Progressive activists are pushing the Democratic Party left on a range of issues this year, and foreign policy should be no exception.