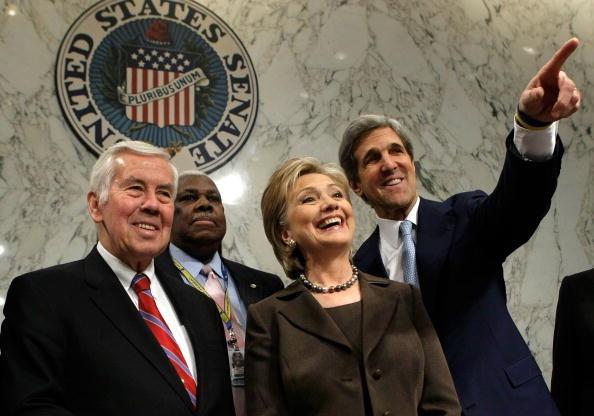 Corporations and nuclear labs, not the cause of disarmament, are the true beneficiaries of New START.
By Darwin BondGraham | September 17, 2010 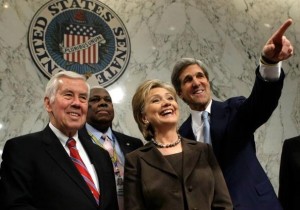 Passage of New START in a 14-4 vote out of the Senate Foreign Relations Committee is already being hailed by Democrats and arms control NGOs as a substantial victory. A floor vote for ratification is now apparently set to occur after the elections.

While much noise has been made about the New START treaty’s cut to the nuclear weapons stockpile, the actual required reduction in arms may be as low as 8%, or 162 warheads out of a total of thousands. Furthermore, keep in mind too that this only affects deployed strategic warheads, not “tactical” weapons, and not weapons in the “reserve” stockpile.

So why the big deal? Why are both sides fighting like mad over a treaty that really requires virtually no change to the status quo US-Russia relationship and US nuclear stockpile?

Here’s why in a nutshell:

1. The Democrats, led by the Obama administration, want the treaty badly in order to prove that their means of combating proliferation and the rising power of states like Iran is better than the Republican strategy. The difference essentially is that the Democrats propose to give the impression that the USA is cutting its arsenal and seeking “global zero.” Of course it’s not and the Dems intend to fund the US nuclear complex at large levels. Long-range national security state doctrine calls for keeping nukes far into the future, and modernizing them the whole way along. But the Democratic foreign policy establishment thinks their plan will provide superior power, diplomatic and military, when dealing with nations that pose a threat to US imperial interests. It’s a tough balancing act, this anti-nuclear nuclearism! Thankfully the liberal militarists have found willing allies in the foundation community. Funds and NGOs like Ploughshares, American Friends Service Committee, and Peace Action West have lobbied extensively for ratification, proving that a little money goes a long way in politics.

2. The Republican strategy remains what the old gipper gave us — “peace through strength.” G. W. Bush pursued it with his aggressive nuclear weapons programs, but the Democrats managed to back him down. Undeterred, many Republicans think the Democrats are wasting the national security state’s time and energy and would just rather invest huge sums in weapons and invade and occupy nations as a first and early recourse when problems arise. There remains a great deal of ideological opposition to treaties, especially arms control pacts, whether or not they actually constrain US military might.

3. In addition to this acrimonious debate about imperial strategy, there’s bread and butter. While New START doesn’t pose any threats to any military funding whatsoever, it does offer a major opportunity to demand huge funding increases for several weapons programs.

A. Chief among these is the nuclear weapons program. New START ratification is being used as the primary forum in which to hash out the budget for nuclear weapons over the next ten years. Thus far supporters of the nuke complex have gotten a pretty good deal; a minimum $10 billion increase over the next ten years to build a new plutonium pit factory, new uranium plant, new weapons components factory, and other major capital projects. Corker and Isakson’s votes on September 16 to pass the treaty to the full Senate for a ratification vote may signal that they have received even larger funding commitments for the huge nuclear facilities in their states, or that they will use their vote on the floor to extort better deals between now and then.

B. Then there’s “missile defense” and “prompt global strike.” Missile defense has its own agency in the Pentagon and budget larger than the NNSA’s. Prompt global strike, a new conventional strategic weapons system capable of killing anyone on the planet in under an hour with hypersonic munitions, is a multi-hundred million dollar and growing program. Both are getting very large increases in Obama’s FY2011 budget, due in part to Republican demands that neither program be constrained by New START. Of course the treaty does no such thing, but the concern is really a theatrical way of demanding even larger increases for these weapons systems. The Democrats are too happy to oblige. Obama and Biden are champions of prompt global strike.

4. Thus the Senators on both sides of the debate are working for the nuclear weapons complex, Pentagon, and their powerful corporate contractors. The Democrats have already offered up major funding increases, even before Republican opposition. Conservatives have only pulled the issue further to the right, and arms control foundations and NGOs have fed the whole process by making New START out to be vastly more important and meaningful than it objectively is.

Still don’t see the bi-partisan consensus to fund the nuclear weapons complex and Pentagon’s missile defense and prompt global strike programs and contractors? Here’s some campaign finance data for the Senate Foreign Relations Committee members’ 2010 election cycle bank accounts. Both Democrats and Republicans are well endowed, demonstrating why the interests of the nuclear weapons complex and other weapons programs are absolutely not threatened by New START.

Darwin BondGraham is a member of the Los Alamos Study Group. He’s also an ethnographer and historian with a degree in sociology. His current work focuses on economic and social development.