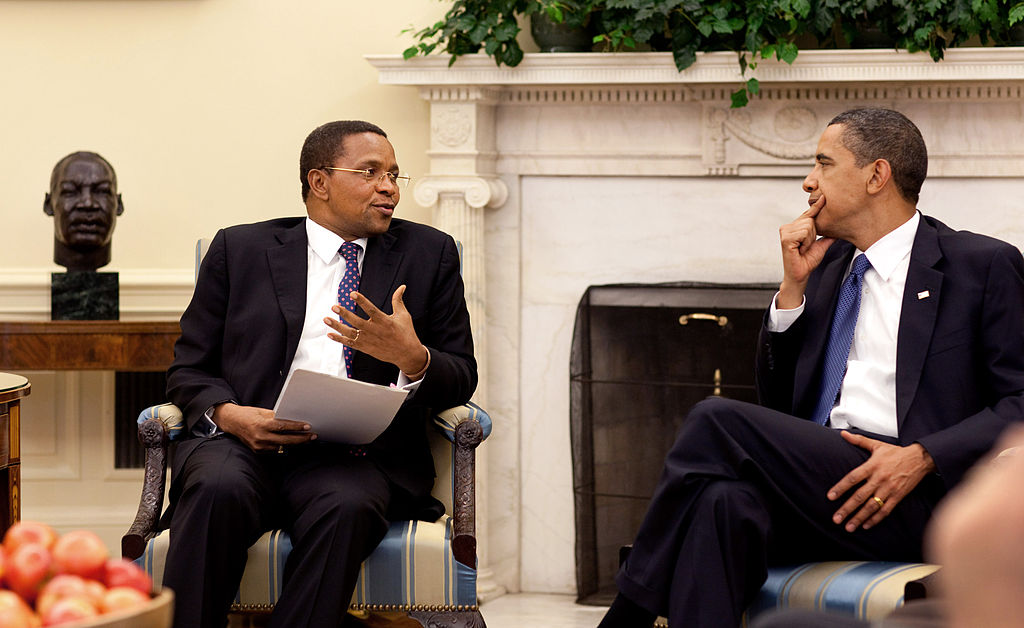 Jakaya Kikwete, the president of Tanzania, was the first African head of state to meet President Obama.

President Obama is definitely "into" Africa. Unfortunately that has translated into holding the door open for U.S. multinationals to do what outsiders have done for centuries: extract the continent’s wealth.
By John Feffer | August 6, 2014

President Obama is definitely “into” Africa. As much as possible in a world riven by multiple crises, the president has made the continent a focus of his policymaking. Turning his own Kenyan heritage into a personal bridge to the region, he has visited Africa three times as president – in 2009, 2011, and 2013. He has touted his administration’s multi-billion initiatives such as Power Africa to bring electricity to millions of homes, a fellowship program for young African leaders, and the continuation of efforts to fight HIV-AIDS and other infectious diseases.

At a time when criticism is mounting about the way the president is handling the rest of the world, Africa is shaping up to be Obama’s major play for a legacy.

This week, to better position this effort, Obama welcomed delegations from 51 African countries to Washington for an unprecedented summit. As part of its press blitz, the White House released a fact sheet that detailed all the State Department’s high-profile programs including support for democracy in Nigeria, an expansion of civil society activity in Liberia, and an open government initiative in Sierra Leone. Many of these initiatives are indeed admirable, and I can imagine State Department staffers grumbling that the media focus on Ebola and Boko Haram has left no space for these more upbeat stories.

But don’t be fooled by all the talk of Obama’s special relationship with the continent or all the snazzy new entrepreneurial initiatives or the commitment to democracy reflected in his statement in Ghana a few years ago that “Africa doesn’t need strongmen, it needs strong institutions.” Most of U.S. policy toward Africa, alas, is business as usual. Yes, the President is “into Africa.” But more often that has translated into facilitating the entry of U.S. businesses into Africa so that they can do what outsiders have done for centuries: extract the continent’s wealth.

Strip away all the modern PR and prettified palaver and it’s an ugly scramble for oil, minerals, and markets for U.S. goods. Everyone wants a piece of Africa: drooling outsiders, corrupt insiders, cynical middle men. “We kind of gave Africa to the Europeans first and to the Chinese later, but today it’s wide open for us,” General Electric chief executive Jeffrey Immelt said at the summit, inadvertently providing a compact definition of neo-colonialism. And for all the talk of good governance and transparency, the political status quo of “guided democracy” with a sprinkling of genuine dictators provides the presumed stability and secure access to resources that the U.S. government, the Pentagon’s Africa Command, and businesses like General Electric value.

First, let’s dispense with the nonsense that China is the only country that behaves with no scruples when siphoning everything of value from Africa. The State Department’s Johnnie Carson provided an unvarnished U.S. perspective in a Wikileaks cable: “China is a very aggressive and pernicious economic competitor with no morals.” Well, It’s true that China has developed a reputation for dealing with dictators like Robert Mugabe in Zimbabwe, failing to hire local workers or purchasing local materials, and engaging in horrendous labor rights abuses in the mines it runs.

But China’s relationship is evolving. It is Africa’s leading trade partner, and a million Chinese are living in Africa. “A growing number of Africans say the Chinese create jobs, transfer skills and spend money in local economies,” writes the rarely China-friendly Economist. “African democracy has so far not been damaged. China turns a blind eye to human-rights abuses, but it has not undermined democratic institutions or conventions.”

The United States, meanwhile, presents itself as Africa’s ethical friend. It likes to point to the Dodd-Frank Act to prove that U.S. businesses are scrubbing their supply chains of unethical purchasing. The Act requires companies to disclose their payments to governments and contains specific provisions requiring producers to make sure that they’re not buying “conflict minerals” from armed groups in Congo.

But the first requirement hasn’t been implemented, and the second provision has produced decidedly mixed results. “The first round of conflict mineral investigations was due June 2, but only 6 percent of audited companies satisfied adequate compliance standards,” reports one watchdog organization. “Worst of all, of the nearly 1,000 enterprises that submitted reports pertaining to conflict minerals, 94 percent failed to validate their suppliers’ sourcing tactics.”

Dodd-Frank, in any case, affects only a small fraction of U.S. business dealings with Africa. Let’s look at the larger category of foreign direct investment (FDI). For all the high-minded talk, the United States and China have exactly the same record when it comes to FDI and governance. Both receive a score of -.1 in a Brookings index that puts Japan on top in terms of directing FDI toward more accountable governments (.5) and France at the bottom (-.3) for basically not giving a merde. In other words, both the United States and China basically go where the return on investments is most promising, regardless of political environment.

Then there’s the question of arms sales. No doubt China’s deliveries to Sudan and Zimbabwe are unacceptable, and its sales of small arms definitely fuel conflicts in the region. But according to a Norwegian study of the period 1989 and 2008, the United States provided more military assistance in dollar value to dictators in Africa than China did. In the last few years, the United States has made sales to the following unsavory governments in Africa: Algeria, Cameroon, Chad, Egypt, Equatorial Guinea, Niger, and Nigeria.

Since 2001, writes Nick Turse this week in China, America, and the New Cold War in Africa, “the United States has steadily increased its military footprint, its troop levels, and its missions on the continent — from night raids in Somalia and kidnap operations in Libya to the construction of a string of bases devoted to surveillance activities across the northern tier of Africa.” The State Department alone devoted $15 billion to security operations in Africa from 2005 to 2012, while the Pentagon has lavished a larger but unknown sum on its counter-terrorism operations in Mali, Niger, Nigeria, and elsewhere. The results have been less than inspiring: coups, collapsed states, and burgeoning terrorist organizations. China, meanwhile, has built roads, made friends on all sides of conflicts, and positioned itself for the long game.

The Obama administration wants us to understand that, like China, it is transforming relations with Africa. “We do believe we bring something unique to the table,” national security advisor Ben Rhodes said last week. “We are less focused on resources from Africa and more focused on deepening trade and investment relationships.”

That sounds nice. But it’s not actually true. The leading trade partner for the United States in Africa is Nigeria, and the leading U.S. import is oil. In 2013, the United States imported from Africa $26.3 billion in crude oil, $3.2 billion in precious stones, and nearly $1 billion in ores like titanium. That represents 77 percent of all imports. The remainder is largely raw materials such as cocoa beans, rubber, and unroasted coffee beans.

Of course, trade is a two-way relationship. As the U.S. Trade Representative Michael Froman said at the summit, “The United States has benefitted from AGOA [the Africa Growth and Opportunity Act] as well, not just from the stability that comes with increased global prosperity, but also from the market opportunities that accompany Africa’s rise. Since 2000, U.S. exports to sub-Saharan Africa have increased fourfold, from $6 billion to $24 billion. Last year, these exports helped support nearly 120,000 American jobs.” In an ideal world what’s good for Africa is also good for America. But too often, these economic deals preserve the same old inequitable relationship.

Consider the new agricultural initiatives. At the summit, the United States announced billions of dollars more in agricultural assistance to Africa. Although some of the funds will go to support local farmers growing food for domestic consumption, like sorghum, most of the money comes in the form of pledges by corporations like Coca Cola to source from Africa. Farmers make up two-thirds of the workforce in Africa. The challenge is to make their farming more sustainable. Tying farmers into volatile market relationships with immense multinationals is a spin of the roulette wheel, not a sure way of lifting Africa out of its dependency on the outside world.

Because of its “resource curse,” Africa’s oil and minerals and coffee beans have profited a narrow elite that has served as the middlemen to outsiders. This curse has undermined democracy and embedded corruption into the very circulatory system of the continent. If we were really “into Africa,” we would work to ensure that these resources benefit the largest number of Africans possible.

Some of what the Obama administration has done points in the right direction. But it is overwhelmed by the more powerful plays of the Pentagon and the multinationals. The president should be reining in these powerful players rather than opening the door wider for them to get into Africa. Only if this happens can the resource curse become a resource blessing. It’s the rare country like Norway that has accomplished this feat. But if Obama can help make this happen for Africa, his legacy would indeed be secure.