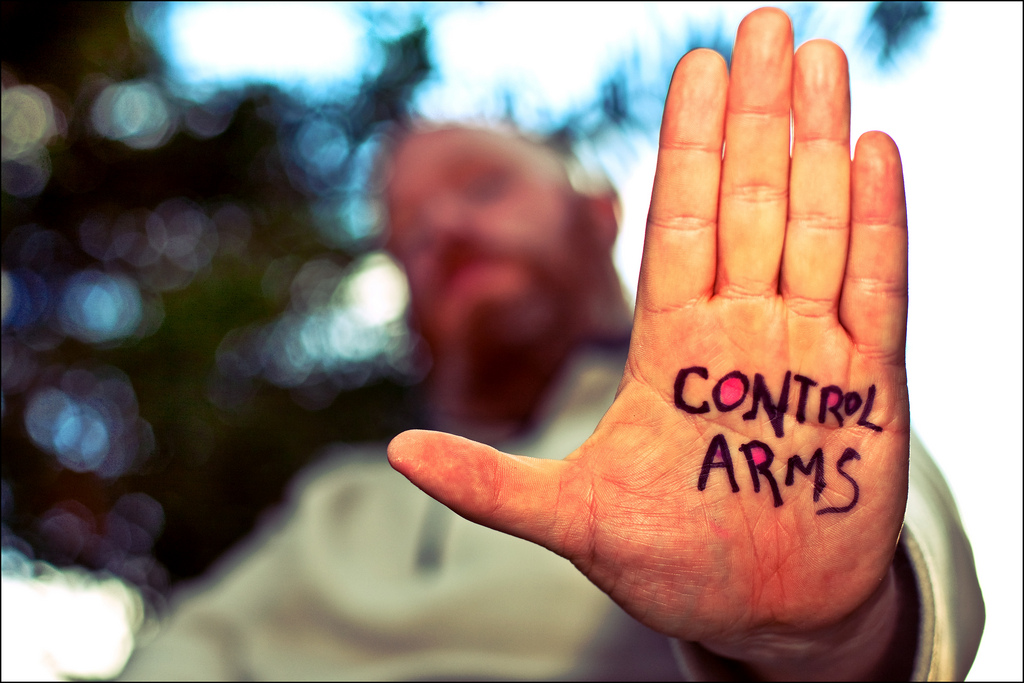 In a recent policy directive, the Obama administration pledged to forgo arms sales to parties that violate human rights. But at the same time, it gave U.S. exporters free reign to export many new classes of weapons and equipment. (Photo: Redfishingboat / Flickr)

The United States is far and away the world’s leading arms trafficking nation, with $60 billion in arms transfer agreements last year alone.

In 2011, the last year for which full global statistics are available, U.S. companies and the U.S. government controlled over three-quarters of the international weapons trade.

The Obama administration is proud of its accomplishments on this front and regularly touts the role of U.S. officials — from embassy personnel on up to the president himself — in promoting U.S. arms sales.

“It is an issue that has the attention of every top-level official who’s working on foreign policy throughout the government, including the top officials at the State Department,” he said. “In advocating on behalf of our companies and doing everything we can to make sure that these sales go through . . . we take it very, very seriously and we’re constantly thinking of how we can do better.”

But according to administration officials, promotion is only one side of its approach to arms transfers. On January 15, the Obama administration issued the first official policy directive on conventional arms sales since the mid-1990s. The document, Presidential Policy Directive 27, carries on the administration’s explicit commitment to promoting arms sales, but it also includes a pledge to show restraint by being extremely careful about which countries receive U.S. weaponry.

The most encouraging element of the new policy is its pledge to forego sales where there is a likelihood that the weapons transferred will be used to conduct genocide or other atrocities, violate international humanitarian law, or contribute to violations of human rights.

One would think that any reasonable policy on arms transfers would include these strictures, but that is not the case. Human rights concerns have too often taken a back seat to other considerations, from access to military bases and the cultivation of allies in key strategic locations to a desire to cement relations with major oil-producing countries like Saudi Arabia.

The explicit human rights language in the new Obama policy directive mirrors that contained in the United Nations Arms Trade Treaty, and it holds out hope that basic principles of human rights may now be given higher priority in arms export decision-making. As the State Department’s Tom Kelly put it in an interview with Reuters, “we wanted to make sure that it’s very clear that human rights considerations really are at the core of our arms transfer decisions.”

Another promising element of the administration’s new policy is its pledge to pay closer attention to where U.S. arms end up. Whether arming the Shah of Iran in the 1970s or transferring weaponry to Afghan extremist groups fighting against Soviet forces in Afghanistan, the U.S. government has historically paid too little attention to where U.S. arms end up. Iran still has U.S. weaponry dating back to the Shah’s era, and al-Qaeda and al-Qaeda-like groups around the world have benefited from the U.S. weapons that were poured into South Asia during the Soviet occupation of Afghanistan.

The new Obama policy seems to take account of the risk of U.S. weapons ending up with hostile regimes or organizations when it states that it will take into account “the risk that significant change in the political or security situation of the recipient country could lead to inappropriate end use transfer of defense articles.”

The real question is how these new arms transfer criteria will be applied in practice. Will Washington reconsider multi-billion dollar sales to Saudi Arabia and other Persian Gulf regimes given their human rights records or long-term stability? Or will other considerations like the desire to boost the U.S. arms industry by increasing exports to the region take precedence? This question may be moot given the tens of billions of dollar in arms sales agreements the United States has concluded with Saudi Arabia in recent years. But there is still a chance that the new criteria could have an impact on U.S. arms transfer decisions in other parts of the world.

A Loosening of Controls

Ironically, the administration’s new rhetoric of restraint has been enunciated in parallel with an effort to loosen arms export controls, an initiative that could inadvertently make it easier for U.S. weapons to fall into the hands of terrorists and human rights abusers. This danger results from a decision to take thousands of items off the U.S. Munitions List (USML) and place them on the less restrictive Commerce Control List (CCL).

This change will mean that these items will no longer need a license from the State Department to be exported and will instead be subject to the less stringent controls maintained by the Department of Commerce — an agency more associated with export promotion than export control.

There are two principal problems with the administration’s new approach to regulating arms exports. First, the weapons and weapons components that are moved under the jurisdiction of the Commerce Department are not likely to receive the regular human rights vetting that occurs during the State Department’s licensing process. Second, the decision to allow many of the items moved to the Commerce list to go to 36 allied nations with no license at all will make it easier for smugglers that have set up front companies in these allied nations to get a hold of U.S. arms components and ship them on to Iran, China, or other destinations prohibited under U.S. law.

The administration has defended its new arms export control policy as an effort to put “higher fences around fewer items” so that scarce enforcement resources can be concentrated on high-end weapons and weapons components whose transfer could undermine U.S. military superiority. Streamlining export controls in this way would not necessarily be a bad thing, but the Obama administration has lifted the “fences” from far too many items, from older model transport planes to Huey attack helicopters to surveillance equipment. The administration’s narrow focus on controlling the flow of modern equipment to potential competitors ignores the danger posed by making it easier to export low-tech items to nations of concern. Iran, for example, wants spare parts to keep its aged American-made fighter jets and attack helicopters flying; China wants older model technology to copy and manufacture; and many regimes want the means of daily repression, like low-tech guns and communication and surveillance equipment. None of these items would be kept behind the “high fence” of United States export controls as envisioned by the Obama reform.

The Obama reforms did not occur in a political vacuum. Major business networks like the Coalition for Security and Competitiveness have welcomed the administration’s pro-industry stance. The 19 members of the group, which lobbied hard for the arms export control reform, include the Aerospace Industries Association, the Business Roundtable, the United States Chamber of Commerce, the National Association of Manufacturers (NAM), and the National Defense Industrial Association.

As so often happens in the realm of business lobbying, the public rationale for this policy change focused not on the possibility of increasing industry profits but on the jobs that would allegedly be produced. The only study of the subject was a flawed effort by the Milken Institute — funded by the National Association of Manufacturers — which arbitrarily assumed that export control reform would radically increase U.S. sales to key markets like China and India. And neither the Milken report nor the administration accounted for the job loss that could occur if the reforms make it easier to transfer U.S. production technology to other countries.

It’s hard to see how the Obama administration’s aggressive promotion of arms exports can be made compatible with the pledges of restraint contained in its new policy directive. Congress needs to subject the arms export decontrol initiative to much greater scrutiny with respect to its impact on human rights and jobs. And the public and Congress need to press the administration to adhere to the human rights principles set out in its new arms transfer policy directive. Given the uncertainties of current global politics, a policy of unrestrained arms exports is both unwise and unacceptable.

William D. Hartung is the director of the Arms and Security Project at the Center for International Policy and the author of Risks and Returns: The Economic Illogic of the Obama Administration’s Export Reform (August 2013).