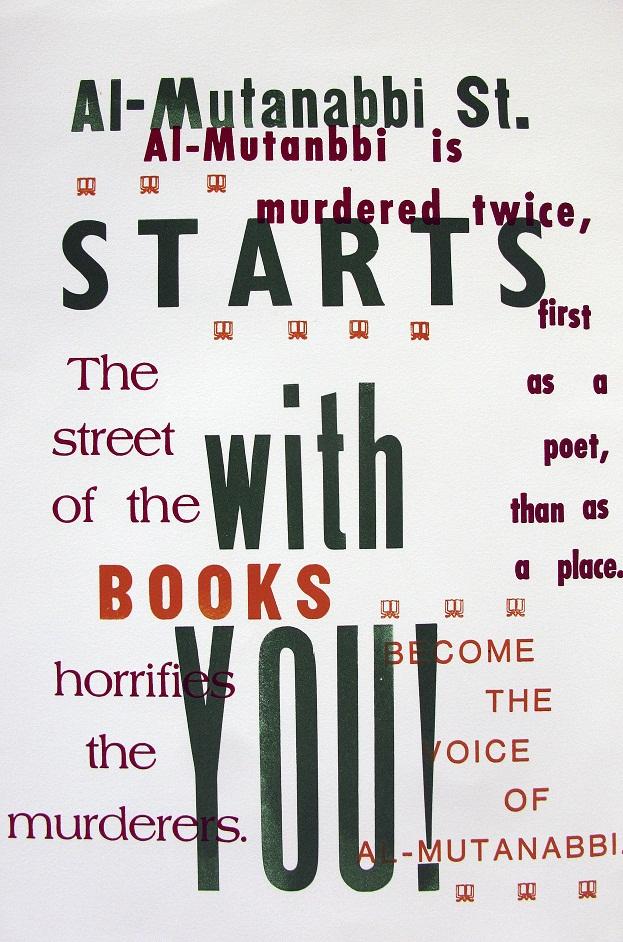 Al-Mutanabbi Street was once the center of literary life in Baghdad. A new project brings the street back to life.
By Sarah Browning | June 28, 2011 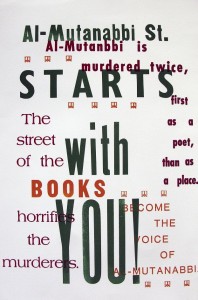 Named for a tenth-century poet and revolutionary who lived in what is now Iraq, Al-Mutanabbi Street in Baghdad was the center of the city’s intellectual and literary life. It was home to booksellers, stationery stores, antiquarian bookstores, and cafes as famous for the ideas that flowed freely as for their pungent coffee.

In 2007, a car bomb exploded on Al-Mutanabbi Street, killing 30 and injuring another 100. Residents of Baghdad felt it as not just another attack but a strike against the richness of Iraqi literary history and against the free exchange of ideas and openness of thought. Books and papers lay scattered and charred beside the corpses on Al-Mutanabbi Street that day in March.

Beau Beausoleil, an American poet and bookseller based in San Francisco, was inspired to act. He created the Al-Mutanabbi Street Starts Here project because “I felt this connection between Al-Mutanabbi Street and here, and myself, on a visceral level. If I were an Iraqi, a bookseller, a poet, I would be on that street. I felt we needed some sort of response [to the bombing] from our own arts community.”

He put out a call to letterpress printers for broadsides. Originally a printed page of newsprint, broadsides are now most often prints that combine visual elements and words, usually poetry. “I’ve always felt that letterpress printers were essentially ‘first responders,’” Beausoleil says. “They were the ones that showed both our aspirations for a better society as well as our collective grief over any major thing that had happened. And it’s been that way since printing began, practically.”

Al-Mutanabbi Street Starts Here grew as printers and poets responded to the call to build solidarity with the people of Iraq and, at the same time, remind Americans of the great toll the war is taking on Iraqi society. “I have come to feel that wherever someone sits down to read, or where someone takes up their pen and paper to write, it is there that al-Mutanabbi Street starts,” says Beausoleil. The broadsides now number 130, one for each person killed or maimed in the attack. An anthology will be published in 2012 by PM Press.

The broadsides may present just a few words, such as “Books Not Bombs” by Nina Ardery of Carillion Press of Indianapolis, Indiana, in which the word BOMBS is slowly transformed into the word BOOKS. Or they may incorporate full poems by contemporary and historic poets writing in English or Arabic, poets such as Iraqis Buland al-Haydari and Saadi Yousef, Palestinian Americans Naomi Shihab Nye and Deema Shehabi, and Iranian Americans Persis Karim and Sholeh Wolpé. They are stark and bloody and beautiful, a great diversity of visual styles, and they can all be viewed on-line.

Beausoleil explains: “Some broadsides are kind of subtle. Some are really anti-war. Some address the idea of censorship and the idea of attacking a street that sold books, a place where ideas were exchanged, and how no matter the devastation, whoever had done it could not erase what was there, ultimately.”

The broadsides have been exhibited in libraries, galleries, and universities throughout the United States, Ireland, the United Kingdom, and Canada. This month they come to Washington, DC, to the Corcoran College of Art + Design from July 7 to 31. Casey Smith, Assistant Professor at the Corcoran College and curator of the exhibit, was struck by the unique medium of the project, the fine letterpress broadside. “The Corcoran offers a masters degree in book arts, combining the study of poetry and literature with a book-making studio program, so the Al-Mutanabbi Street project is a perfect synergy for us.”

Another exhibit is planned at Westminster Reference Library, in London’s East End, August 1 to September 7, 2011. Also this summer, one full set of the broadsides travels to the Iraqi National Library in Baghdad, where they will become part of the library’s permanent collection.

To launch the exhibit here in Washington, DC, Split This Rock, of which I am director, has joined forces with the Corcoran College of Art + Design and Foreign Policy in Focus to present a reading of poems from the project itself and others inspired by Al-Mutanabbi Street. The poets reading, Tina Darragh, Zein El-Amine, Jinahie, and myself (I have a poem forthcoming in the anthology), represent a broad range of poetic styles, from the avant garde to the narrative and lyrical to spoken word, a diversity of voices that parallels the great variety among the broadsides themselves. The reading and a reception take place in Gallery 31 at the Corcoran College of Art + Design, 500 7th Street, NW, Washington, DC where the broadsides will be exhibited, Thursday, July 7, 6-8 pm.

Ways to Count the Dead

“Keeping track of the Iraqi death toll isn’t the job of the United States,” a student said,“and besides, how would we count the dead?”

Take their limbs strewn about the streets—
multiply by a thousand and one.

Ask everyone in Baghdad who has lost
a brother. Cousin. Sister. Child—to speak
their name in a recorder.

Go to every school, stand
at the front of the class, take roll;
for every empty desk, at least two dead.

Find every shop that sells cigarettes—
ask how many more cartons they’ve sold this year.

Go to the bus station and buy ten tickets—
offer them free to anyone who wants to leave.

Go see the coffin-maker. Ask how much
cedar and pine he’s ordered this month.

The dead don’t require much. They don’t speak
in numbers or tongues, they lie silent

Don’t fill your pens with their ink.
Write with your fingernails, scratch
light upon these darkened days.

Sarah BrowningSarah Browning is the director of Split This Rock, an associate fellow of the Institute for Policy Studies, and a contributor to Foreign Policy In Focus. She is the author of Whiskey in the Garden of Eden.