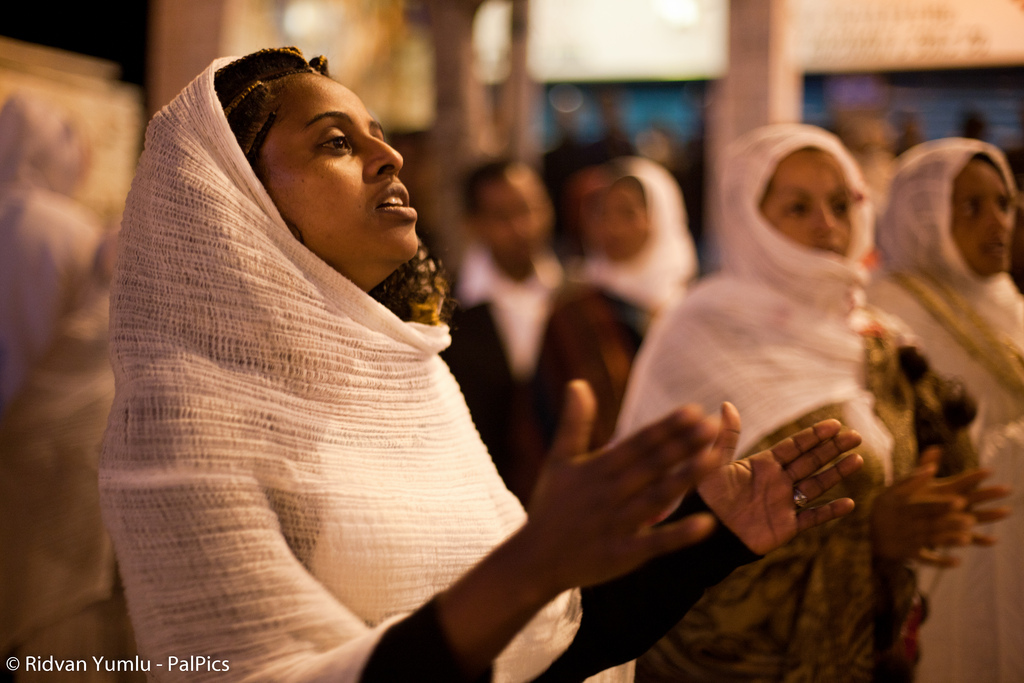 Two young women reflect on their decision to flee Eritrea, a small state that produces one of the highest rates of asylum seekers in the world.
By Dan Connell | August 14, 2015

Neema and Afrah, both Muslims from Eritrea’s Blin minority, fled Eritrea a year apart. Today they share a small house in the Sudanese capital of Khartoum with Neema’s husband and young daughter. They came together for an interview at the unmarked office of a small Islamic charity half an hour’s drive from central Khartoum.

Both women wore long dresses and the colorful headscarves, or tobs, common in Sudan. Both were shy about telling their stories and asked to do so through a translator, though every so often one or the other would correct the translation.

Afrah, 23, came in 2013, fleeing her home city of Keren as soon as she finished her 11th year of secondary school. She left to avoid a call-up for national service that requires students to do their 12th year at the Sawa Military Training Center, together with Eritrea’s equivalent of army boot camp. When they graduate, they’re soldiers. They don’t get their diplomas until they’ve served 10 years.

She said she feared this would turn into unending servitude in the army or on a public works project or state-run plantation, as had happened to many of her friends since a border war with Ethiopia in 1998-2000. The country has been in a perpetual state of emergency ever since, and national service has been extended indefinitely for unmarried men and women between 18 and 40.

She said she also feared exploitation and abuse by military officers, which she’d heard was rampant among young female conscripts.

Neema, 27, came this year. She married right after 11th grade and was excused from service on that basis. But her husband answered the call and then fled to Sudan to escape, after which she was heavily pressured to give the authorities information on his whereabouts. She’d tried to escape a year ago, but she’d been caught and jailed, which only intensified her surveillance — and her desire to get out.

That first time, she paid a smuggler 25,000 nakfa ($1,700 at official rates) to take her, her mother, and her daughter to Sudan. They set off one night on foot, making it as far as the border city of Tessenei before their arrest.

She said they spent a month in jail there, questioned but not beaten, as were the men in cells that were out of sight but not out of hearing. In her case, the questions, always the same, came daily: Where were you going? Who was helping you? Were other persons going with you?

It had only been them, she answered each time. Evidently, she was believed, as they were let go after paying a fine of an additional 25,000 nakfa, plus a bond guarantee of 200,000 more if they fled again.

A year later, they did just that, on foot again, this time reaching Sudan after four frightening nights with little food or water, amid the rustle of snakes in the scrub around them and hyenas tracking their every move. They slept in the brush during the scorching hot days, more worried about border guards than wildlife. The trip cost her 70,000 nakfa, on top of the bond she forfeited.

Once safely in Sudan, she went straight to Khartoum and was reunited with her husband, who had found work in a family-run shop and rented the apartment they were in now. It had all been worth it, she said.

Afrah paid 100,000 nakfa two years earlier and came across with 13 young people (four girls and nine boys), all of whom were trying to escape national service, she said. Most were from the Christian, Tigrinya-speaking highlands, the area that has also produced many top government officials.

In that respect, her group represented the typical demographic of the flood of people coming from a state with a total population of less than 4 million. The majority of those fleeing are between 16 and 24 years old and include people from nearly all Eritrea’s nine ethnic groups. This diverse cross-section is united by their aversion to endless service at pay so low their families have to subsidize them to survive, and all that for a government many insist does not represent them.

There have never been national elections in Eritrea, nor are there any legal parties apart from the victorious Liberation Front. There’s no independent press, and there are no other organizations or NGOs not under state or ruling party control. A constitution ratified in 1997 has never been implemented.

This exodus has placed the country in the ranks of Syria, Iraq, and Afghanistan in terms of the numbers of asylum seekers it produces. Italian authorities report that Eritreans are the second largest group, after Syrians, in the leaky boats that are ferrying thousands of new refugees and migrants across the Mediterranean.

The journey starts at the Sudan border, but it can take many branches from there.

Neema dreams of going with her husband to London, where she has relatives. She hasn’t made up her mind whether to risk the trek across the Sahara and the perilous sea-crossing. Though a Muslim, she, like most Eritreans with whom I spoke, is acutely aware of the latest danger in Libya — the Islamic State, which last spring beheaded some 30 Ethiopians and Eritreans.

For her part, Afrah is biding her time.

A boy she knew since childhood and met again in Khartoum survived these dangers and won refugee status in the Netherlands. He has proposed. Their families have agreed to the union. All she has left to do is an interview with Dutch authorities, now scheduled for November.

If all goes well, her fiancé will fly to Khartoum, marry her, and take her back with him, giving her full legal status for the first time since she left Eritrea.

But would she ever consider going back home, I asked?

“Of course,” she responded. “But we need a big change.”

When asked what change, she listed three needs: the prisons to be closed, people to have the freedom to come and go as they like, and a limit to national service.

Dan Connell is a visiting scholar at Boston University’s African Studies Center. He’s reported on Eritrea for almost 40 years is working on a book on the refugee experience. Visit his website danconnell.net for more information.