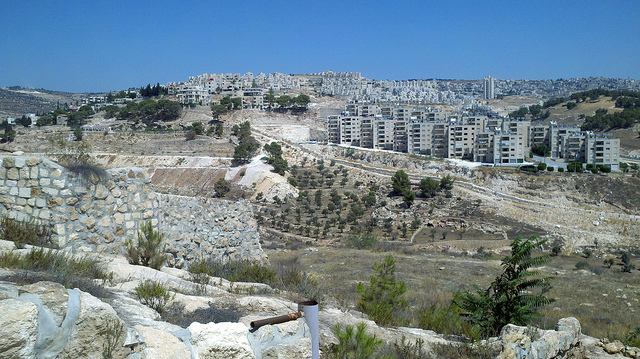 RE/MAX's international office claims it has no jurisdiction over the activities of its Israeli franchises.
By Rob Prince | May 3, 2016

At 2 pm on this coming Thursday, May 5, a group of activists will gather at the annual shareholder’s meeting of RE/MAX to protest the real estate company’s policies of selling real estate in the West Bank settlements of Occupied Palestine. The sponsoring groups include Front Range Jewish Voice for Peace; Friends of Sabeel, Code Pink, Coloradans for Justice in Palestine, and HeartLand. It is part and parcel of a national movement to press the real estate giant to stop selling land in the West Bank illegally expropriated from Palestinian landowners as a part of Israel’s intensified settlement policy there.

RE/MAX is no small operation.

Short for “Real Estate Maximums,” RE/MAX is an American international real estate company based in Colorado that operates through a franchise system. The company has held the number-one market share in the United States and Canada since 1999, as measured by residential transaction sales. RE/MAX has more than 100,000 agents in 6,800 offices. RE/MAX operates in about 100 countries, among them Israel. It claims to have the largest real estate business volume in the world.

A leaflet announcing the protest explains why it was organized:

Justice for Occupied Peoples is an issue both global and local, especially in this case, since RE/Max is a Denver, Colorado-based real estate company facilitating the theft of land and settler colonialism for profit in violation of international law and a growing world-wide movement for justice for the Palestinian people.

Picket organizers are hoping that “a resolution will be introduced asking the Company to form an ad-hoc committee to re-assess and report on the implications for peace efforts, justice, public perception, and international law of RE/Max’s dealings in Palestine/Israel, particularly with respect to transactions taking place in the Occupied Territories and involving lands and properties to which “parties” to said transactions have, at best, questionable claims.”

The leaflet goes on:

For RE/Max to form such a committee would be a First Step toward this Colorado founded and based organization in joining a growing international host of scholars, artists, governments, students, communities, and private ventures putting their material interests on the line for justice for the Palestinian people. As citizens of Colorado, the United States, and the Earth, we feel particularly called to honor the aspirations of our Palestinian friends, neighbors, and family members.

The movement to press Re/MAX, the world’s largest real estate company, to stop selling properties in the West Bank, Palestine, is now two years old. It got off the ground in early 2014, not long after Richard Falk, who at the time was the United Nations Special Rapporteur on Palestine, issued a September 18, 2014 report to the U.N. General Assembly on the general situation of human rights in the Occupied Territories of Palestine.

The 23-page report analyzed the overall situation of the Occupation in the aftermath of the 2012 Israeli war on Gaza. Early on in the report Falk gives his assessment of the impact that settlement building in the West Bank:

The cumulative process of unlawful settlement building and expansion has reached a point where a partially irreversible process of creeping annexation has taken place, which needs to be recognized as such, that undermines the core assumption of “belligerent occupation” as a temporary reality. This alteration of the occupied territories over time has been perversely acknowledged, even provisionally validated, by the widely held assumption that Israeli “settlement blocs” will not be dismantled even in the event that a peace agreement is reached between the Palestinian Authority and Israel.

Falk’s assessment of the situation in Gaza is even more troubling.

The situation of the Gaza Strip is particularly troublesome, as its 1.7 million people have been compelled to live under a blockade since 2007. Gaza seems to be threatened with even greater hardships for its population as a result of recent developments in Egypt. While Israel is the Occupying Power and thus maintains legal obligations to Palestinians in Gaza, the population — for the time being — needs consistent access to and from Egypt by way of the Rafah crossing and also, in order to ensure its survival, needs access to the tunnel network that has been supplying Gaza with basic necessities.

It should be recalled that a United Nations report issued a year ago, before the recent complicating developments, concluded that the habitability of the Gaza Strip was in doubt after 2020. During the mission of the Special Rapporteur, several experts on the threatened infrastructure of Gaza observed that even such a dire prediction was too optimistic, and that 2016 was a more realistic date [my emphasis]. What is at stake in such a situation of extreme deprivation is a comprehensive assault on the social and economic rights of the people of Gaza, as embedded in the International Covenant on Economic, Social and Cultural Rights, to which Israel is a party. The maintenance of the blockade is a continuing violation of article 33 of the Fourth Geneva Convention, which unconditionally prohibits collective punishment.

Falk’s prediction that “the habitability of the Gaza Strip” could collapse even before 2020 as a result of the 2012 Israeli war on Gaza – as suggested in another U.N. report – is prescient. A number of more recent reports echoed Falk’s assessment – that the place is unlivable as a result of sustained Israeli bombing, the targeting of public service and the ongoing blockade.

As a part of this report Falk analyzed RE/MAX’s sale of properties in West Bank settlements as well the activities of the Dexia Group, a European banking group, to see if the companies had violated international law by the commercial activities they pursue in the East Jerusalem and West Bank sectors of Occupied Palestine.

On RE/MAX’s role in helping perpetuating the Occupation in the West Bank, Falk commented:

The Dexia Group and Re/Max International, in different ways, assist in the growth of settlements: the Dexia Group by providing financial services connected to the settlements, and Re/Max International by selling settlement properties. In terms of assessing the causal connection to the policy and practice by Israel of transferring its citizens to Palestine, this must largely be based on the connection between the global companies and the settlement activity. Do the activities of the global companies directly contribute to the violations of international law that the settlements constitute? Voluntarily playing a causal role in the commission of a crime can in certain instances be enough to make them accomplices to that crime.

The international office based in Denver issued a statement that it has no jurisdiction over the activities of its franchisees and that the policies of the Israeli RE/MAX franchise are its own and not subject to its control. RE/MAX is generally unresponsive to its critics but in 2014 – as reported in a recent article in The Intercept – “RE/MAX released a statement claiming it was not responsible for the actions of its Israeli franchisee, having sold its brand rights to Israeli businessman Bernard Raskin in 1995.” The article continues: “But according to Human Rights Watch, RE/MAX still earns financial benefits from its Israeli franchise operations in the form of broker fees, revenue and annual dues.”

Frankly this is old and laughable logic. One has to wonder if one of the main “benefits” of franchise operations is to deny legal and moral responsibility, liability for what are in essence subdivisions of an international company. It is a classic variety of “sub contracting” which insulates parent companies from being sued for morally reprehensible and openly illegal (by international law) activities and is quite common – a form of plausible denial of crimes committed in the name of profit, little more.

A follow-up on Richard Falk’s report to the United Nations General Assembly on RE/MAX’s activities of selling properties in Israel’s illegal West Bank settlements was done by Human Rights Watch (reported in the Intercept article). Entitled “Occupation, Inc,” the report is a thorough, sober, hard-hitting analysis of the oppressive consequences of Occupation on all aspects of West Bank Palestinian life. Along with Falk’s report, it is worth reading in its entirety.

By advertising, selling and renting homes in settlements, both the Israeli franchise of RE/MAX and RE/MAX LLC, the owner of the global franchise network, facilitate and benefit from the transfer of Israeli civilians into occupied territory and the associated human rights abuses, contravening their rights responsibilities. [My emphasis]

It noted that as of November 2015, that is less than six months past, RE/MAX offered 80 properties for sale in 18 different settlements with a combined value approaching $36,250,000.

Without going into details yet – I will in future blog entries – it is clear that certain Coloradans are deeply involved in supporting and making profit off the Occupation and that RE/MAX is far from the only Rocky Mountain player. A number of large churches here actively subsidize different settlements – in activities that are probably patently illegal – and certain other real estate interests are also involved, both in real estate and now in the stampede to control the profits from Eastern Mediterranean natural gas finds. More on the activities of these others in a later report.