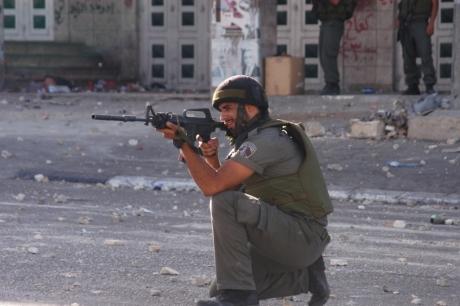 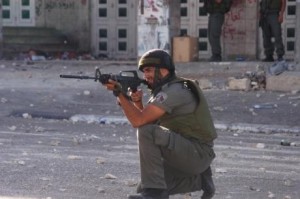 Ten years ago this month, following a particularly deadly series of Palestinian terrorist attacks, Israeli Defense Forces (IDF) launched an assault on several Palestinian cities and refugee camps in the West Bank. The Bush administration largely supported the Israeli offensive, even as hundreds of civilians were killed and thousands of young men were detained without charge amid widespread reports of torture.

[T]he IDF acted as though the main aim was to punish all Palestinians. Actions were taken by the IDF which had no clear or obvious military necessity; many of these, such as unlawful killings, destruction of property and arbitrary detention, torture and ill-treatment, violated international human rights and humanitarian law. The IDF instituted a strict curfew and killed and wounded armed Palestinians. But they also killed and targeted medical personnel and journalists, and fired randomly at houses and people in the streets. Mass arbitrary arrests were carried out in a manner designed to degrade those detained.

However, the U.S. House of Representatives categorically rejected Amnesty International’s findings. On May 2 of that year, by a vote of 352-21, the House declared that “Israel’s military operations are an effort to defend itself . . . and are aimed only at dismantling the terrorist infrastructure in the Palestinian areas.” This was widely interpreted as an attack against the credibility of Amnesty International, winner of the 1977 Nobel Peace Prize. In an apparent retort to growing demands by peace and human rights groups to suspend military aid to Israel, the resolution called for an increase in military aid, which seemed to reward Israel for its repressio

In a 94-2 vote that same day, the Senate passed a similar resolution, again referring to the Israeli assault on Palestinian towns and refugee camps as “necessary steps to provide security to [Israel’s] people by dismantling the terrorist infrastructure in the Palestinian areas.” Both resolutions stressed their support for Israel’s military offensive in the West Bank.

A joint statement by Senators Dianne Feinstein (D-CA) and Mitch McConnell (R-KY), co-sponsors of an amendment that would block Palestinian officials from entering the United States and otherwise keep the Palestinians out of the peace process, declared that “Israel has done no less – and certainly no more – than what any country would do to defend itself…. Israel’s military operation has been one based on specific intelligence information, with specific military goals – to act directly against terrorists…– and carried out with considerable restraint.” This statement, like the resolutions, came even after journalists’ cameras were finally allowed into the areas targeted by the Israeli assaults. The widespread destruction of civilian infrastructure was apparent even to casual viewers of the evening news.

Meanwhile, then-House Democratic leader Dick Gephardt proclaimed that, in supporting the Israeli government’s offensive, “We will stand for freedom.”

For Arabs and Muslims throughout the world, these bipartisan endorsements of Israeli aggression were indicative of the lack of U.S. concern for basic human rights, or even its racism. The majority of liberal Democrats – most of whom were on record in support of human rights in Guatemala, East Timor, Colombia, Tibet, and elsewhere – had decided, in a situation where the victims of human rights abuses were Arabs, to instead throw their support to the perpetrator of the human rights abuses. In fact, one of the two principal sponsors of the House resolution was California Democrat Tom Lantos, the longtime chairman of the so-called “Human Rights Caucus.”

Remarkably, liberal groups like MoveOn and Democracy for America endorsed the reelection of many of the key Democratic supporters of the right-wing Israeli government’s offensive, labeling them “progressive heroes.”

On May 7, the UN General Assembly voted on a resolution condemning Israel for its assaults against Palestinian civilians, and for its refusal to cooperate with a UN fact-finding team. The resolution emphasized the importance of civilian safety and wellbeing throughout the Middle East and condemned all acts of violence and terror resulting in deaths and injuries among both Palestinian and Israeli civilians. The United States was one of only four countries in the 189-member body voting in opposition. (In addition to Israel and the United States, the only others voting “no” were the tiny island states of Micronesia and the Marshall Islands, both former U.S. colonies heavily dependent on U.S. aid.)

Meanwhile, the Bush administration supported Israel’s successful effort to block the UN investigation. This came despite a public opinion poll that week that showed that more than three-quarters of the American public believed Israel should allow the United Nations to investigate.

During Israel’s April 2002 offensive, UN High Commissioner for Human Rights Mary Robinson reiterated her call for an end of the suicide bombings as well as an end to the occupation. She particularly criticized the Israelis for placing 600,000 Palestinians under a strict curfew for most of the month, for destroying Palestinian medical, religious, and service institutions, and for using Palestinian civilians as human shields. Robinson, a former president of Ireland and now head of the International Commission of Jurists, had been one of the most visible and effective Human Rights commissioners in UN history. In response to her criticisms of America’s most important Middle East ally, however, the United States – which has veto power over the re-appointment of top UN officials – forced her to step down at the end of her first term.

Emboldened by this strong bipartisan support, Israel launched even deadlier assaults against civilian targets in Lebanon in July 2006 and in the Gaza Strip in December 2008. As with the West Bank offensive 10 years ago, Amnesty International and other reputable human rights groups condemned the actions of both Israel and its armed Arab opponents.

In both cases, as with 10 years ago, the Israeli attacks were supported in bipartisan congressional resolutions as legitimate acts of self-defense, in language that directly contradicted findings by Amnesty and other human rights groups. And yet again, prominent Democrats who supported these resolutions were labeled “progressive heroes.”

Until the right-wing Israeli government and its supporters in Congress are held accountable, such large-scale attacks against civilian population centers will continue.

Stephen ZunesStephen Zunes is a professor of politics and chair of Middle Eastern Studies at the University of San Francisco and a columnist for Foreign Policy In Focus. His latest book (co-authored by Jacob Mundy) is Western Sahara: War, Nationalism and Conflict Irresolution (Syracuse University Press, 2010).