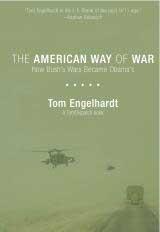 Tom Engelhardt chronicles how the United States has succumbed to infinite war.
By Andrew Feldman | August 20, 2010

Since the attacks of September 11, protection from terrorism has become the United States’ national obsession. Demands for security from the terrorists that seemingly menace the country at every turn have led the U.S. military to occupy two countries and expand the hundreds of bases that it maintains in dozens of foreign nations.

Reflection on why people in the United States have consented to such a radically expansive military response has been as absent from the process as funding for wars has been limitless. Which is why Tom Engelhardt’s observations on these monumental changes in The American Way of War arrive none too soon.

In this edited collection of articles originally published online, Englehardt depicts the fundamental reshaping of U.S. perceptions of the world and presents his own thesis of the causes of current U.S. thought on terror. A combination of fear and divorce from the realities of war, he argues, allows people in the United States to live in peace at home while at war abroad.

This, he argues, is the paradox of post-September 11 America. While the U.S. government spends hundreds of billions of dollars on war, spying, and covert operations, people in the Unite States still imagine that they are “the greatest victims on the planet.” As U.S. drones evaporate weddings and funerals across the Middle East, the U.S. media and political class are in a permanent state of crisis incongruent with the reality of the most powerful country on the planet.

Engelhardt briefly recaps the various acts committed by the Bush administration under the auspices of the “Global War on Terror”: the torture, kidnapping, and prisoner abuse that occurred outside of the legal system; the innocent people caught up in false accusations; the lies the government told to Congress and the public; the invasion of two countries, resulting in the deaths of tens of thousands of civilians; and the humanitarian crisis, ethnic cleansing, and 4 million displaced people unleashed by the invasion of Iraq.

These simple pleas for readers to reconsider an idea they might previously have taken for granted are one of the strengths of this book. Demonstrating Engelhardt’s experience as a professional editor, he avoids the overly strident or self-righteous condescension that characterizes too much online political writing, instead using clear and unvarnished prose to attack the fundamental principles of the post-September 11 mindset.

One of those principles is fear. Fanned by politicians and accepted by the populace, fear distorts the popular rationale. This fear allows the Department of Homeland Security and the intelligence agencies access to nearly unlimited funds, which over time has created a new homeland-industrial complex. Fear has allowed the presidency to assume greater and greater power, and any near-miss attack whips up an enormous media frenzy that serves to remind citizens of the fear they should be feeling.

The other tool used to obscure the reality of war is language — language that is carefully crafted to ensure that Americans take their government’s portrayal of reality at face value. Even the language of war itself has changed: such a thing as “victory” no longer exists. Rather, war is a process, a state of being that doesn’t depend on the conquering of territory. In a world where war is everlasting, Engelhardt argues, it is easy to justify spending little on diplomacy or any other alternatives that might lead to peace.

None of what Engelhardt spells out is new in the sense that others have not thought it before. In both tone and substance, his work resembles criticisms of government deception and violence from the Vietnam era. But what is full of potency is his combined cultural and political critique of the U.S. imperial war culture that has permeated our nation. People in the United States are blind, perhaps intentionally, to the empire their country has assembled. Such a reminder of its true nature and cost, both to people in the United States and to those affected by it around the world, is invaluable.

Engelhardt’s greatest accomplishment is to call us back to reality. Especially for the younger generations in the United States who came of political age in the post-September 11 world, a United States not at constant war may seem a curious concept. That it takes a political outsider to remind the U.S. public of the realities of terrorism and the façade of a “global war on terror” is proof enough of how necessary such a voice is.

President Obama professes to believe that he can “turn the page” on history. But as Engelhardt reminds us, that choice is an illusion. History is there whether acknowledged or ignored, and in that history, in the shadow of two towers, the United States declared a new kind of global war, a war that it has been fighting for nine years with little end in sight. As Engelhardt concludes, “even as peace is what most Americans experience…war is now the American way.”