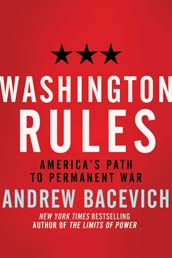 For his first 40 years, Andrew Bacevich lived the conventional life of an army officer. In the military world where success depended on conformity, he followed the rules and “took comfort in orthodoxy…[finding] assurance in conventional wisdom.” Comfort, that is, until he had a chance to peer behind the Iron Curtain, and was shocked to find East Germany more third-world shambles than first-rate threat.

That experience, combined with the introspection that followed his subsequent retirement from the army, led Bacevich to reevaluate the relationship between truth and power. After having taken his superiors at their word for decades, he slowly came to understand “that authentic truth is never simple and that any version of truth handed down from on high…is inherently suspect. The exercise of power necessarily involves manipulation and is antithetical to candor.”

Washington Rules: America’s Path to Permanent War is Bacevich’s fourth book on the subject of American exercise of power. This time, he takes up the question of the political calculations that have produced the basic tenets of American foreign policy since the beginning of the Cold War, examining how and why they came to exist and to survive all challenges to their supremacy.

Bacevich describes two components that define U.S. foreign policy. The first is what he dubs the “American credo,” which calls on “the United States — and the United States alone — to lead save, liberate, and ultimately transform the world.” Second is what he calls the “sacred trinity,” which requires that the United States “maintain a global military presence, to configure its forces for global power projections, and to counter existing or anticipated threats by relying on a policy of global interventionism.”

These rules, Bacevich argues, are no longer vital to the existence of the United States, and have led to actions that threaten to break the army and bankrupt the treasury. Rather, they are kept in place by individuals who derive personal benefit from their continuance. Bacevich does not hesitate to blame a Washington class that “clings to its credo and trinity not out of necessity, but out of parochial self-interest laced with inertia.”

This is a theme that runs throughout the book: that those who make the rules also benefit from them, and thus their demands should always be regarded skeptically.

While abstaining from questioning the patriotism of past leaders, Bacevich is not reluctant to point out how many policies that were later widely embraced were originally trumpeted by ambitious men who had as much to gain personally by their acceptance as did the country: General Curtis LeMay, who built a massive nuclear arsenal as head of Strategic Air Command; Allen Dulles, who backed coups across the globe as CIA director; and General Maxwell Taylor, who rode the idea of “flexible response” from retirement to the position of chairman of the Joint Chiefs of Staff.

The story of foreign policy, then, is not so much different than any government bureaucracy through which vast sums of money flow, and is driven as much by officials jockeying for status than by genuine concern for policy outcomes. Whether in disputes between the Army and the Air Force or the Pentagon and the White House, and whether over money or over purpose, different sectors of the national security establishment propose and promote new doctrines that necessitate increasing their budgets and enhancing their importance.

But Bacevich is not content to only blame leaders. In contrast to George Washington’s ideal of the citizen who would consider it his duty to actively serve his country, Bacevich finds today’s Americans “greedy and gullible,” pursuing personal gain in the stead of collective benefit. Any solution, he argues, must come from an awakened people who demand change from the people they put in office.

As for what that change should look like, Bacevich proposes a new credo and trinity. As a new mission statement, he offers: “America’s purpose is to be America, striving to fulfill the aspirations expressed in the Declaration of Independence and the Constitution as reinterpreted with the passage of time and in light of hard-earned experience.”

As a new trinity, he suggests that “the purpose of the U.S, military is not to combat evil or remake the world but to defend the United States and its most vital interests…the primary duty station of the American soldier is in America…consistent with the Just War tradition, the United States should employ force only as a last resort and only in self defense.”

Bacevich writes in the short, clipped style with which he also speaks, presumably a legacy of his West Point education and decades in the military. His style allows for easy comprehension and neat packaging of his ideas, and readers will not get bogged down in flowery language.

Parts of Bacevich’s thinking require further scrutiny and remind readers of his self-identification as a conservative (lowercase “c”). Economically, he is no fan of stimulus spending, and socially he places blame on individual failings and personal flaws, choosing not to mention an unequal economic system that leaves tens of millions of Americans with barely the resources to take care of their families, much less have time to be informed and active citizens.

In fact, the emphasis throughout the book is on the fact that expansionism, at this particular moment, is not wrong but impossible. Bacevich is, after all, a realist when it comes to international relations theory, and though he happens to agree with liberal anti-imperials on many issues, it is often for different reasons.

However, debates over theory can wait for when the republic is in less immediate peril. This is the second work Bacevich has published under the auspices of the American Empire Project, a book series documenting America’s imperial adventures and their disastrous consequences. The contribution of conservative authors to this task is vital. They remind us that opposition to imperialism is hardly just a liberal cause, and in fact for much of American history was actually a rallying point for conservatives across the country.

Washington Rules is valuable for putting in print what those inside the military establishment don’t dare admit: that, even aside from moral concerns, U.S. international strategy is neither successful nor sustainable and maintained more by lies than by actual results. Bacevich can truly be said to be a realist in that he understand that leaders, when faced with the choice of admitting failure or lying, will almost always choose the latter.