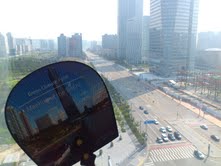 The G-Tower in Songdo. (photo by Oscar Reyes).

With the latest green finance talks in Songdo, wealthy countries have taken another step toward financializing the world's response to climate change.
By Oscar Reyes | July 16, 2013

A view over Songdo (photo by Oscar Reyes).

From the 29th floor of Songdo, South Korea’s jagged “G-Tower,” one can glimpse the endless construction sites and vacant parks of an emerging “global business utopia,” to use the city’s adopted slogan. The newly built city, home to the UN’s nascent Green Climate Fund (GCF), proudly promotes its green credentials, including an impressive network of underused bike lines. Unfortunately, these run alongside 10-lane boulevards ruled by Hyundai limos and Korean airline buses.

Songdo, in short, is a monoculture plantation of skyscrapers, shorn of the diverse ecosystem that characterizes living cities. And the G-Tower is the symbol that tops the lot: a skyscraper with a Pac-Man-like cutaway, as though the institution is running from the ghosts of the World Bank and other multilateral development banks. Like the Fund itself—a centerpiece of the international climate finance regime, designed to fund climate mitigation projects in the developing world—it is currently empty.

A few streets away from the G-Tower, Songdo’s convention center recently played host to the fourth meeting of the GCF’s governing board. There, the GFC’s 24 board members (government officials selected on a regional basis) made several key decisions. These include how the Fund will be managed (should money ever arrive), by whom, and according to what rules.

The most widely publicized decision taken during the meeting was the appointment of Hela Cheikhrouhou, a Tunisian national, as the Fund’s first executive director. She comes to the GCF from the African Development Bank, where she led its work on energy, the environment, and climate change. Prior to that she had a five-year stint at the World Bank working on private-sector investment and infrastructure in Latin America, and had spent eight years at Citibank before that.

Cheikhrouhou’s biography reads like that of a candidate groomed by the multilateral development banks and private sector in the expectation that the GCF should become one of their own. But while her appointment is a conservative choice, it was arguably the least-bad option from a three-person shortlist that also included the Dutch former head of the European Climate Foundation and a Colombian official from the Inter-American Development Bank. The lack of high-profile candidates was notable, although not surprising, given the absence of any secured financing for the GCF and a requirement that appointees relocate to Songdo.

New leaders win media headlines, but institutional design and rule setting tend to have more influence over time. The key structural decisions taken in Songdo concerned the GCF’s Private Sector Facility (PSF), which was created to encourage private investment in projects that reduce both the causes of climate change (by mitigating greenhouse gases) and its impacts (by adapting to a warmer world). These decisions walked a diplomatic tightrope—advancing the creation of the institution while carefully avoiding debates over which private sector the Fund is actually meant to target.

On one side, the developed countries represented on the GCF board advocate a PSF that appeals to capital markets, in particular the pension funds and other institutional investors that control trillions of dollars that pass through Wall Street and other financial centers. They hope that the Fund will ultimately use a broad range of financial instruments.

There is a troubling circular logic underlying this, however. The complex repackaging of debt to hide systemic risk was a key contributor to the financial crisis in developed countries, resulting in huge bailouts that increased their indebtedness. As a result, many developed countries now claim that they have little money available for climate finance, and that the GCF should look to financial markets to make up this shortfall.

On the other side, many developing countries and non-governmental organizations have suggested that the PSF should focus on “pro-poor climate finance” that addresses the difficulties faced by micro-, small-, and medium-sized enterprises in developing countries. This emphasis on encouraging the domestic private sector is also written into the GCF’s Governing Instrument, its founding document.

The purpose of the PSF remained unresolved in Songdo, but many of the rules needed to start its operations were agreed upon. A major dividing line related to whether or not the PSF would have its own “governance structure.” This was opposed by many developing countries amidst concerns that it would  give the private sector the largest voice in determining how this part of the Fund is run—potentially opening the door to both generous corporate subsidies and excessive financial risk-taking.

When the board returned to the issue the following day, a new Private Sector Advisory Group had been added, with wide-ranging powers and a composition that would have allowed the financial sector and other corporations to fill eight of its 12 seats. Four of these seats would have been allocated to developing countries. But the precedent set on the board itself is not promising, with the developing country private sector seat filled by a Canadian-Australian representative of the World Business Council on Sustainable Development—a lobby group for transnational corporations.

Further amendments followed, and the eventual decision was to set up three committees governing the PSF: an Advisory Group with private-sector members and, after much argument, up to two civil society representatives; an Investment Committee to review proposed instruments and spending decisions, including their compliance with environmental and social safeguards; and a Risk Management Committee to exert due diligence and ensure that the PSF does not engage in overly risky investments. The precise composition and role of these committees was not agreed upon, however, and will be up for discussion again at the board’s next meeting.

The GCF board decisions on the private sector fit into a broader discussion of the Fund’s “business model framework” (BMF), the language it now uses to discuss the overall vision and ground-rules governing how the fund will operate.

Several other decisions about the BMF took place, most notably on “direct access” and country ownership. Direct access means that funding from the GCF would go to national governments, or national and subnational institutions serving under them, for further disbursal to relevant projects. “Enhanced direct access” is country ownership with added bite, devolving more decision-making powers to the country level and away from donor countries.

For the U.S. delegation, this was a leap too far, and it repeatedly blocked any attempt to put the words “enhanced” and “direct access” in the same sentence. For a brief moment it looked like agreements on the entire business model would stall due to U.S. intransigence—an inauspicious start for the fresh climate policy approach promised by President Obama. Eventually, though, a compromise was struck that would have the board consider “additional modalities that further enhance direct access” at its first meeting in 2014.

Slow progress and fudged decisions were in evidence elsewhere as well. For example, a long discussion on “financial instruments” ensued. An agreement to begin with grants and concessional loans already existed, but the Songdo meeting saw an extended debate on whether these initial instruments “will” be followed by other financial instruments or whether those others would merely be “considered.”

Participants haggled over three paragraphs of text, clause by clause, for close to three hours. By that time, the chair intervened to note that the compromise proposal was virtually identical to what had been agreed upon at previous meetings. And so, they deleted the three paragraphs so laboriously deliberated.

In its treatment of observer organizations and transparency commitments, the Songdo meeting could only be described as regressive. Civil society “active observers,” who can intervene in board discussions (but not decisions), were entirely silenced on the last day of the meeting, and were refused permission to discuss with board members.

A debate on webcasting, meanwhile, occasionally flirted with reality but mostly embraced surrealism. An initial discussion paper, prepared by private consultants, had put a $30,000 price on webcasting, which observers were quick to point out was 10 times higher than the cost of equivalent webcasting services used by the UN’s Adaptation Fund board meetings.

Australia and the United States, meanwhile, led the charge in complaining that webcasting should be avoided for fear that it could distort the board’s discussion. The Democratic Republic of Congo (DRC), Zambia, and Sweden retorted that transparency in decision-making was not an optional extra. Despite this, the board agreed to a “compromise” (proposed by France) that its recordings would be posted online three weeks after the event. In response, the DRC board member noted that in this context information is a perishable good. The decision on webcasting, he might have added, had already gone rotten.

The Songdo board meeting left many issues unresolved. The pivotal questions of when and how the GCF will be funded, and by whom, remain the elephant in the room. Those issues sit at the top of a crowded agenda for the board’s next meeting, scheduled to take place September 4-6, 2013 in Paris. That’s a considerably more romantic setting than Songdo. But it remains to be seen whether the GCF will continue its flirtation with the financial sector—or genuinely embrace its pro-poor mission—at the last board meeting before its formal launch.

Oscar Reyes is a writer and activist focusing on climate and energy finance. An associate fellow at the Institute for Policy Studies, he recently helped to launch climatemarkets.org, a website connected with IPS’ Sustainable Energy and Economy Network.