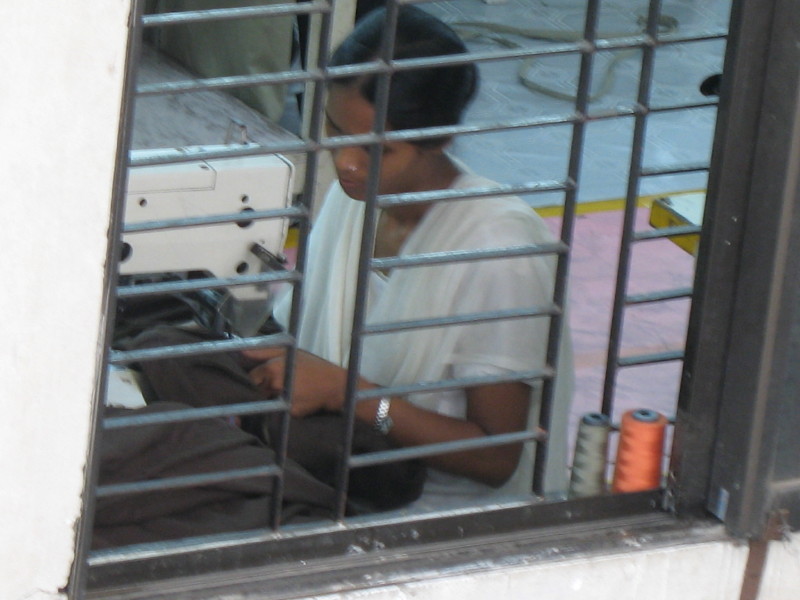 Because the U.S. government buys uniforms for its employees from the same Bangladeshi garment factories that corporate importers like Wal-Mart and the Gap use, U.S. taxpayers are effectively paying to support sweatshops. (Photo: kgbbristol / Flickr)

While feigning outrage at worker abuse in Bangladesh, the U.S. government has been quietly supporting the same sweatshop factories used by Wal-Mart and the Gap.
By Robert J.S. Ross | January 6, 2014

This article is a joint publication of Foreign Policy In Focus and TheNation.com .

The world was shocked last April when over 1,100 workers were killed in a building collapse in a Bangladesh garment factory. Warnings had been issued the day before about cracks in the walls of the Rana Plaza building in Savar, but the workers were forced to enter the building on the morning of the collapse anyway. Illegal floors had been added to the structure, and the permitting process that had somehow allowed the modifications was redolent of shady political influence. Even now, over eight months later, the families of survivors and the hundreds of wounded workers have yet to receive full and just compensation for their losses.

The Rana Plaza collapse obliterated all previous records for deadly garment industry disasters, including New York’s Triangle Factory blaze in 1911, which claimed 146 lives; the Tazreen factory fire in Bangladesh in November 2012, which killed 112 workers; and the Ali Enterprises fire in Pakistan from September 2012, which killed 298 workers.

For most readers in Western world, this was disaster on a scale previously unimaginable. But close observers of the world’s rag trade were not surprised.

Bangladesh’s garment industry has a gruesome history of major fires and building collapses going back over 20 years. A report by the International Labor Rights Forum (to which I contributed numerical analysis) uncovered over 1,000 deaths from factory fires and collapses in Bangladesh from 1990-2012. And fires have continued to take the lives of Bangladeshi garment workers even since the Rana Plaza collapse.

Cutthroat global competition—and the attendant race to the bottom in labor standards—is at the root of the callousness with which factory owners treat workers. And lucrative contracts with Western importers are financing the abuse. Even as Bangladesh’s industry became notably perilous, these importers made the country the second-largest exporter of garments in the world. Data I have collected over the last decade shows why: the average price for imported garments (which is most of the clothing Americans wear) is going down, and Bangladesh is the lowest price source in the world.

It’s no surprise to find giant North American retailers Wal-Mart and GAP at the head of the list of importers from Bangladesh. Similarly, it’s no shock that the two companies rejected the pioneering Bangladesh Accord on Fire and Building Safety, an agreement among labor unions, NGOs, and corporations to maintain minimum safety standards in Bangladeshi factories. That well over 100 firms — but just six North American companies — did sign the accord suggests the crocodile tears of the big U.S. importers are less than sincere. Expressing concern for “the families of the victims of tragedy” in April 2013, Wal-Mart, instead outlined a plan to go it alone without worker input.

Instead of binding regulations or agreements, corporate importers favor a model of “self-regulation” called Corporate Social Responsibility, or CSR. Under this system, the brand or retailer requires that a “social audit” be performed at the factories with which it contracts. Sometimes these audits are grossly mistaken (the Pakistani factory that burned down in 2012 was certified), while other times they are simply ignored (Wal-Mart’s auditor told it the Tazreen factory had an “orange” caution light).

And now the U.S. government, while ostensibly encouraging businesses to source their purchases responsibly, appears to be no better than these scofflaw firms.

A recent investigation by Ian Urbina in the New York Times reported that the U.S. government spends over $1.5 billion a year on uniforms that come from pretty much the same factories that are burning down and collapsing, cheating their workers, and hiring child labor. Federal agencies, which proclaim zero-tolerance for labor abuse, use the same outmoded techniques of contract procurement and compliance that turn private-sector brands into purveyors of poverty and danger. The agencies — like the big commercial firms — are not compelled by either law or contract to “Do The Right Thing.” Like their private-sector counterparts, these guardians of the public trust have effectively embraced CSR.

A major flaw of the voluntary CSR “movement” is that the audits the firms pay for are performed by private companies, not independent entities, and the results do not produce mandatory remedies. Worse still, the audits generally exclude workers — the first, best, and last monitors of factory conditions, and the best defenders of their own interests — as authoritative actors or reliable sources.

The results speak for themselves. In another study my students and I are currently preparing for publication, we found that in every one of the high-mortality fires or collapses that we could trace in Bangladesh since 2000, the factory owners sold clothing to Western firms that had clear codes of conduct promising that their business would only be done with partners that ensured safe working places.

In contrast to the voluntary CSR model, compliance with the historic Bangladesh Accord is mandatory for the signatories. If internal processes do not work to ensure workplace safety, binding arbitration settles disagreements about safety measures and the administration of safety investments. Violations may be taken to a court of law, and the input of workers is mandatory at the both the factory level and in the administration of the overall project. This resembles, roughly, the strategy of controlling contractor abuse in the U.S. garment industry that evolved in the 1940s. These were “jobber agreements” that required the manufacturers (including many of today’s brands) to take responsibility for conditions in contractor factories.

In a surprise victory last summer, the House of Representatives passed an amendment to the Defense Authorization act that would have required military retail stores to source from firms that were part of or met the standards of the Bangladesh Accord. But the amendment did not survive the conference between House and Senate; arcane maneuvering killed it.

That leaves the U.S. government and the U.S. taxpayer back where we were before: paying taxes to support factories that abuse workers and sometimes kill them.

An expert on the global garment trade, Robert Ross is a research professor of sociology at Clark University’s Mosakowski Institute for Public Enterprise.