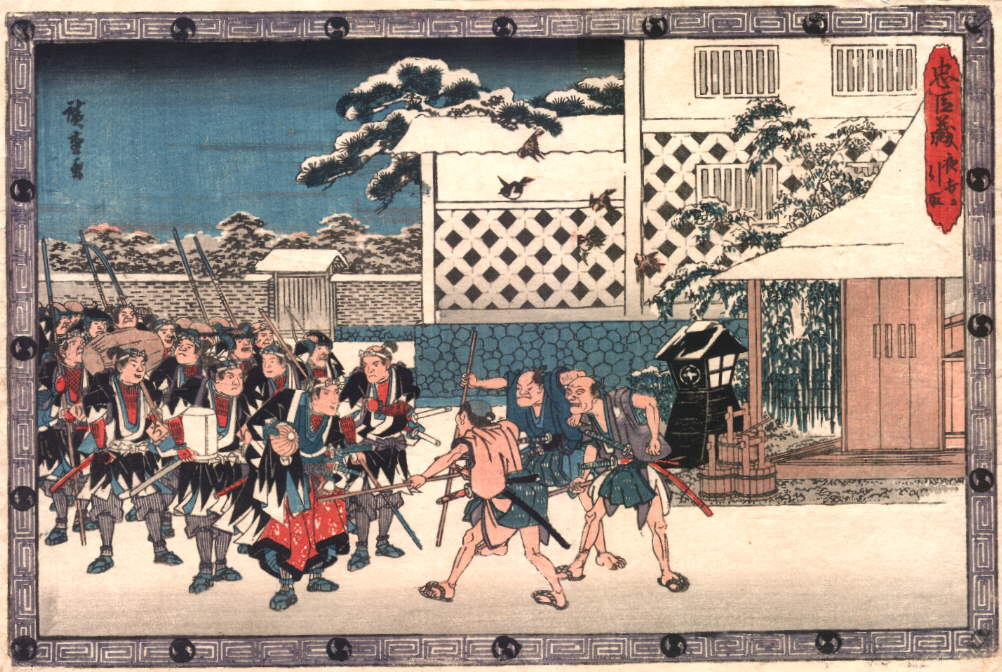 The Senate GOP's letter to Iran was an act of vengeance for their discredited code of honor: neoconservatism.
By John Feffer | March 18, 2015

In traditional Japanese culture, a samurai without a master is known as a ronin.

The most popular tale featuring these leaderless samurai is the 18th-century Chusingura. It tells of a feudal lord who must commit ritual suicide after assaulting the court official who had insulted him. Of the lord’s several hundred retainers, 47 loyal samurai plot their revenge on the haughty court official. After two years of scheming and subterfuge, they put their plan into motion. They surround the court official’s mansion, kill a number of his guards, locate the wretched man, and cut off his head.

Revenge complete: a head for a head. But since the shogun had ruled out revenge in this case, the 47 ronin had knowingly defied the government. They’d felt a need to obey a much deeper tradition in Japanese culture: to honor their former master. They also knew that they’d have to pay a price for discharging this debt of obligation.

Except for the messenger who delivered the news of the court official’s murder, the ronin are all ordered to follow the example of their master. They, too, commit ritual suicide. Their graves at the Senkaku temple in the heart of Tokyo are even today a destination for pilgrims. The Chusingura has taught generations of Japanese that obligation must always trump political expediency.

This venerable Japanese tale of treachery, honor, and revenge has been performed many times on stage, both with puppets (bunraku) and with actors (kabuki). But a new production, modernized and updated, has now been remounted here in Washington, DC. Even though the show has gotten some terrible reviews, I feel obligated to add my own critical voice.

In this new American production of the Japanese classic, 47 Republican senators play the roles of the 47 ronin. They too deliberately defy the shogun, played with equanimity by President Obama. But the American ronin are out to kill a policy, not a person.

Led by upstart Arkansas Republican Tom Cotton, who earned his samurai sword on the field of battle in Iraq and Afghanistan, the 47 Republican ronin send a letter to the distant shogunate of Iran. The epistle, which comes at a critical moment in the negotiations to roll back Iran’s nuclear program, offers two arguments. President Obama doesn’t really have the authority to make a binding nuclear deal, the ronin maintain. And even if such a deal were concluded, a future president or a future Congress could quickly undo it.

These rogue senators are not interested in obeying the letter of the law: They prefer the law of their letter. Nor do they feel any need to show deference to their commander-in-chief. Like their Japanese counterparts, they too believe that they’re acting toward some greater purpose. But unlike the Chusingura, they have no desire to pay the political cost for this treachery — the loss not of their heads but of their offices. But it may well come to that.

This is no laughing matter. Still, as Marx once said, history repeats — first as tragedy and then as farce. So, what does the farce of the 47 Republican ronin teach us about Capitol Hill politics today?

The Republican Party now controls Congress. Although the party leadership has done plenty to undermine the Obama administration’s foreign policy over the years — even where the interests intersect, like drone strikes and military spending — it’s now shifted into full-on combat mode.

The first salvo in this new round of conflict was the invitation from House Speaker John Boehner (R-OH) to Israeli Prime Minister Benjamin Netanyahu — without any consultation with the White House or the minority party — to address both houses of Congress.

But the letter of the 47 ronin is a far more serious act of revenge. These Republican senators believe that their master — neoconservatism — received a deadly series of insults from President Obama when he took office. The previous shogun, George W. Bush, had made regime change in Iran a priority: putting the country in the “axis of evil,” initiating a secret program to disrupt the country’s nuclear program, adding more sanctions to an already restrictive regime.

Obama, after a brief flirtation with Stuxnet and the Green Revolution, reversed course. The culmination of negotiations with Iran came in November 2013 with an interim agreement that the United States would relax somewhat the sanctions regime in exchange for a freeze on Iran’s nuclear program. At least with respect to Iran, neoconservatism has sustained several punishing blows.

Both sides have kept to their side of the bargain. But the Republican ronin, leaderless after the dethroning of the neoconservatives, have vowed to enact their revenge. They can’t kill the shogun, but they can attempt to kill his policy.

Their letter is designed to disrupt the negotiations and revert to the earlier regime-change approach to Iran. Cotton himself has urged more sanctions, more preparations for war, and more weapons to Israel. Any day now he’ll break into the neocons’ favorite Beach Boys song, Barbara Ann, with a chorus retrofitted for their political purposes — “Bomb, Bomb, Bomb, Bomb, Bomb Iran” — just as John McCain sang it in 2007. Neocon Joshua Muravchik has already called the tune with his recent op-ed dismissing sanctions in favor of all-out war.

The backlash against the ronin’s letter has been enormous — from the media, from politicians, even from the Republican camp.

Not only did former Bush speechwriter Michael Gerson criticize the letter, he even suggested that it “raises questions about the Republican majority’s capacity to govern.” The Iranian leadership, judging from Ayatollah Khamenei’s response, has come to a similar conclusion.

Fortunately the Iranians know a thing or two about how American politics operate. Indeed, Foreign Minister Mohammad Javad Zarif, who received a Ph.D. in international law and policy at the University of Denver, probably knows more about law and politics than Tom Cotton does. Meanwhile, the negotiators soldier on, despite the intervention of the ronin, toward an end-of-March deadline to work out a framework agreement.

Subterfuge might play a role in this drama, just as it did in the old Japanese story. After all, the letter has made the provocative bill authored by Tennessee Republican Bob Corker — which would require congressional approval of any deal the Obama administration secures — seem like a “sensible” bipartisan effort. Before the letter, the bill lacked enough votes for a veto-proof majority. But now sponsors think they can peel away another couple Democrats to get the majority they need.

The Chusingura is not supposed to culminate in the victory celebration of the ronin and their reelection in 2016. But this is America, the land of “happy” endings. What was the last play you saw on Broadway that ended with the mass suicide of all the principal actors? Even though I haven’t seen it, I’m pretty sure that’s not the finale to The Lion King.

But this is Congress, not Broadway. The ronin should not celebrate quite so soon.

In Japanese puppet plays, or bunraku, the audience can see the puppet masters on stage. They’re dressed in black like ninjas, and they work against a black background. But even as you suspend your disbelief, you know they’re there.

The current U.S. production of Chusingura seems like it’s a live-action play. But a little investigation reveals that a number of wealthy puppet masters are at work behind the scenes, manipulating principal characters like Tom Cotton. The Arkansas politician has attracted major league support from the most conservative members of the Israel lobby: billionaire casino mogul Sheldon Adelson, media maven Bill Kristol, wealthy anti-Iran campaigner Paul Singer.

The presence of these puppet masters helps to explain the motivation of the 47 Republican ronin. Remember, the heart of the Chusingura is the reasoning of the ronin. They’re sacrificing their lives not just for their dead master but for an ideal: honor. The motivation of the 47 Republican ronin is less pure. They know who signs checks for their reelection campaigns. They know that anti-Obama posturing plays well with their constituents. They know that, at a time of economic growth and low unemployment, they have to destroy the foreign policy accomplishments the president hopes can burnish his record and that of the Democratic Party.

To be clear, the Republican ronin are probably not guilty of violating the Logan Act, which forbids U.S. citizens from negotiating with foreign governments. The 47 senators were not negotiating with Iran. That’s the last thing on their minds: They want nothing to do with Iran.

Rather, the Republican senators are guilty of a more serious trespass. They’re prioritizing the national interests of Israel over those of the United States.

Actually, it’s not even the national interests of Israel — it’s the perceived interests of that portion of the political elite that supports Prime Minister Benjamin Netanyahu’s efforts to sabotage the negotiations with Iran. Israel’s ruling elites are divided on this issue. After all, even former Mossad chiefs disagree with Netanyahu’s position on Iran, and the spy agency’s current position is that the additional sanctions Congress is considering would deep-six the negotiations.

The ronin perhaps think that they’ve backed the right horse. After elections this week in Israel, Netanyahu will again head up the government. And the last mid-term elections in the United States delivered Congress into the hands of the Republican Party.

But on the Iran issue, the Obama administration has the backing of a large majority of the American electorate, including 65 percent of Republicans and 64 percent of independents who support direct negotiations. If an agreement comes out of the current talks — and negotiators are doing their damnedest to work through the details — Obama will simultaneously strengthen the hands of reformers in Iran, isolate Netanyahu, and marginalize his congressional opponents.

Cotton and company are not going to fall on their swords as a result. But they may pay a price at the polls in 2016 if their opposition to successful negotiations becomes a political millstone. If that happens, their letter — and the larger strategy to push the United States into a war with Iran — will end up as just so much Beltway kabuki: colorful theater with zero impact on policy.