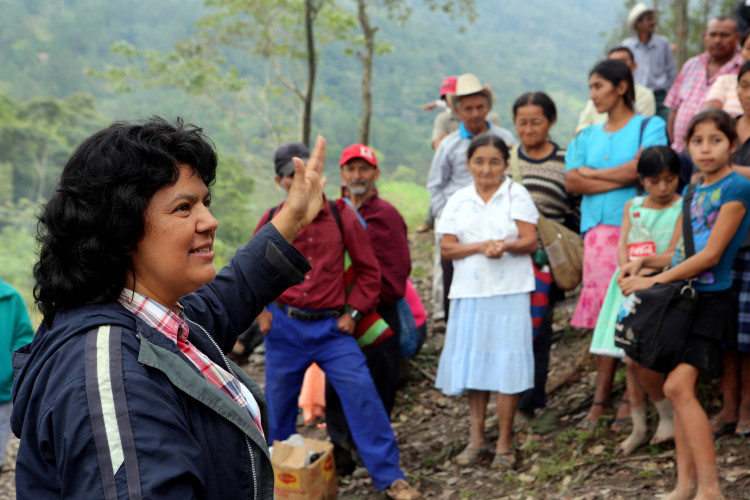 Berta Caceres in the Rio Blanco region of western Honduras. Caceres was assassinated in 2016. (Photo: Goldmanprize.org)

The Biden administration says it wants to counter the corruption that’s driving displacement. Does that apply to U.S. allies in Honduras?
By Laura Carlsen | June 21, 2021

On her recent trip to Guatemala and Mexico, Vice President Kamala Harris drove home two points: that potential immigrants to the U.S. should “stay home,” and that the Biden administration will not tolerate corruption, which it sees as a major barrier to development in the region.

The U.S. government has generally been on the wrong side of history when it comes to combating corruption in Guatemala, Honduras, and El Salvador — the three Central American countries that currently account for most migration to the United States. It has backed powerful economic and political interests in the region, to the point of overturning elected governments and funding death squads.

And this isn’t just the ancient past. Washington’s continued promotion of private sector extractive industries that cause environmental destruction, resource depletion, displacement, and conflicts with local communities, as well as U.S. support for Central American security forces involved in extrajudicial executions and other egregious human rights violations, all still exacerbate the out-migration Biden seeks to stem.

Then there’s the selective nature of how U.S. anti-corruption campaigns are applied. It’s significant that Harris didn’t make a stop in Honduras, despite the fact that Hondurans account for the majority of Central American migrants. The reason is simple: a photo-op with the Honduran president Juan Orlando Hernandez would be an embarrassing reflection of the administration’s double standard on anti-corruption.

Hernandez has been implicated in drug trafficking and corruption cases in the United States, where his brother, Tony Hernandez, was sentenced to life in prison for trafficking cocaine and funneling the money into Juan Orlando’s presidential campaign. In February of this year, the Southern District Court of New York revealed that President Hernandez himself is a target of investigation for using state security forces to protect drug traffickers who in turn have helped bolster his political control over the county.

A high-profile trial winding up in Tegucigalpa will be an important sign of Honduras’ commitment to rule of law and whether or not that matters to the Biden administration.

DESA was building the Agua Zarca Hydroelectric Project that Cáceres opposed when she was assassinated in her home March 2, 2016. In November 2018, seven men, including DESA company employees and members of the Honduran military, were convicted of carrying out the crime. But the masterminds who hired the hitmen remained at large.

During Castillo’s trial, the state prosecution and the victim’s family presented damning evidence of his involvement, including tapes of phone conversations between Castillo and Douglas Bustillo, a former DESA security chief convicted for the murder in the 2018 trial. They also provided evidence that Castillo coordinated surveillance of Berta Caceres and discussed a previous aborted attempt on her life. He also faces corruption charges related to an alleged criminal network of economic interests with international ties behind the hydroelectric project.

Castillo’s trial will likely be decided this month, amid a coordinated media and public relations campaign to undermine the prosecution. International organizations have called for a fair ruling and full investigation and cooperation from the state.

The trial of the feminist land defender exemplifies the challenges to Biden’s Central America plan.

If the Honduran court fails to deliver an impartial verdict in the face of overwhelming evidence against Castillo, it would send a clear message of impunity and discredit the U.S. effort just days after its launch. And it would highlight the critical question facing the Biden administration: Will its anti-corruption campaign be bold enough to target corruption among economic and geopolitical allies at the very top of these governments, or will it back the deceit of the wolves guarding the sheep?

Actions speak louder than words. The anticorruption rhetoric will fail to convince migrants, human rights defenders, or Honduran and international civil society that Biden’s plan is any different from “business as usual” in the region if the administration looks the other way as regional counterparts run roughshod over rule of law.