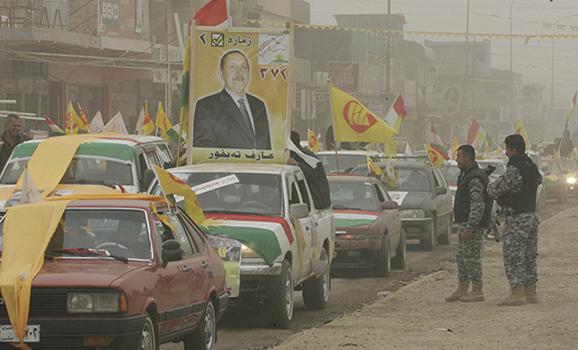 The Dreams and Dilemmas of Iraqi Kurdistan

Amidst the Middle East's ongoing conflicts and turmoil, the Kurds of northern Iraq may come out on top with an independent state.
By Giorgio Cafiero | January 24, 2013 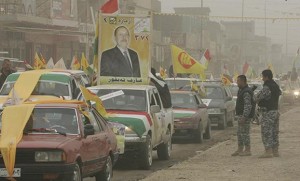 Once strong and unified states on the vanguard of Arab nationalism, Iraq and Syria are on the verge of partition, fragmentation, and dismemberment. In addition to the hundreds of thousands of Iraqis and at least 60,000 Syrians who have lost their lives, other victims of the two nations’ sectarian strife may include the Iraqi and Syrian national identities themselves.

However, the victors of these two conflicts are the Kurds. Today, Iraqi and Syrian Kurds enjoy unprecedented autonomy from Baghdad and Damascus, and the prospects of an independent Kurdish state are real. Despite the Kurds’ gains, the Kurdistan Regional Government (KRG), led by President Massoud Barzani, finds its semi-autonomous state in northern Iraq at several geopolitical fault lines. Barzani must tread carefully in this volatile region to safeguard the Iraqi Kurds’ interests while pursuing independence from central Iraq.

The possibility of war with Bagdad over territory and energy resources constitutes Barzani’s gravest security challenge, as demonstrated by the recent violence in Iraq’s contested city of Kirkuk. Nonetheless, as Iraq’s Arab-Kurdish problems do not exist in a vacuum, one cannot analyze Baghdad and Erbil’s standoff without factoring into account the role of regional heavyweights.

For its part, the KRG in Iraq began providing the Syrian Kurds with military training shortly after their region became autonomous, most likely to enable them to protect their autonomy once the Syrian crisis winds down. A semi-autonomous Kurdish state in neighboring Syria can be expected to provide the KRG with strategic depth during any future military confrontation between Erbil and Baghdad.

Nonetheless, Barzani’s pan-Kurdish aspirations must be balanced with his interests in maintaining ties with Turkey. As relations between Erbil and Baghdad devolve from bad to worse, Turkey’s demand for the Kurds’ oil and Turkish investment in Iraqi Kurdistan will become increasingly valuable to the KRG.

Therefore, if Turkey invades Syrian Kurdistan to target PKK militants, as Turkish Prime Minister Recep Tayyip Erdogan has threatened, Barzani will face a difficult dilemma. The prospects for the KRG’s independence from Iraq largely depend on Erbil’s partnership with Ankara. However, Barzani’s legitimacy within Kurdish circles could be undermined if his actions are perceived to be complicit with Turkey’s determination to destroy the Kurdish dream of independence. Regardless of how the Turkey-PKK conflict unfolds in Syria, both actors will attempt to utilize their leverage over Barzani to affect the outcome. If Turkey and the PKK’s current efforts to resolve their three-decade-old conflict prove successful, Barzani would likely find much relief.

A report in the Iraqi Kurdish media from last year claimed that Iran had begun to establish military bases in the Qandil Mountains, several miles into northern Iraq. In the past, Iran’s military has conducted operations in northern Iraq to target militant Kurdish groups that have waged attacks against the Islamic Republic, primarily the Party for a Free Life in Kurdistan (PJAK). However, Iran’s establishment of a permanent military presence in Iraqi Kurdistan must be understood within the context of Tehran’s geostrategic rivalry with Turkey and adversarial relationship with Israel.

As Turkey and Iran are geopolitical rivals in the Arab world—a reality most highlighted by their opposing stakes in Syria—Iraqi Kurdistan factors into their rivalry. After the Western-imposed no-fly zone was implemented during the early 1990s, both Turkey and Iran were gravely alarmed by the prospects of an independent Kurdish state in northern Iraq. Ankara and Tehran engaged each other cooperatively to secure their mutual interest in weakening militant Kurdish nationalists and protecting Iraq’s territorial integrity. However, as the Kurdistan Democratic Party (KDP) and Patriotic Union of Kurdistan (PUK) fought each other in the Iraqi Kurdish civil war (1994-1997), Turkey (the KDP’s sponsor) and Iran (the PUK’s sponsor) staked out their own respective spheres of influence in Iraqi Kurdistan.

Since Saddam Hussein’s ouster in 2003, Ankara and Tehran have accepted the Iraqi Kurds’ autonomy as a reality. Moreover, Turkey and Iran have come to perceive Barzani as a Middle Eastern partner. In recent years, Turkey, with its growing energy demands and lack of indigenous sources of energy, has become increasingly reliant on the KRG for oil imports. In mid-January, Ali Hussain Belu, the KRG Undersecretary of the Oil and Natural Gas Ministry, stated that each day the KRG exports 15,000 barrels of oil to Turkey, and certain analysts forecast the KRG to become Turkey’s second largest trading partner in 2013. While Iran’s military incursions into Iraqi Kurdistan have naturally created tensions with the local Kurdish population, Iran-KRG trade increased more than 25 percent during early 2012. As Iran seeks to counter the impact of international economic sanctions and Erbil pursues partners with leverage over Baghdad, the KRG and Iran’s expanded political, commercial, and energy ties make sense from a geostrategic standpoint.

Despite the value that Iran places on Turkey as an important energy and commercial partner, Iran’s leadership has lashed out at Turkey over the two countries’ differences on Syria. In this context, Iran must view Turkey’s heavy military presence in northern Iraq (2,000 troops and several dozen tanks) with the suspicion that Ankara’s motives extend beyond targeting the PKK to containing Iran. Meanwhile, Iran’s buildup in northern Iraq is unlikely to be welcomed by the ruling administration in Ankara, as evident by Interior Minister Naim Sahin’s accusation that Iran is sponsoring the PKK in the Qandil Mountains—an allegation Tehran denies.

Clearly, Barzani is aware that threats to Turkish and Iranian security interests, posed by the PKK and PJAK, have prompted the two states to conduct military operations in the KRG. However, the Kurdish leader is surely also aware that Ankara and Tehran’s establishment of a more permanent military presence in the KRG is driven by his neighbors’ rivalry. Erbil must balance these two powers off one another to expand the KRG’s energy ties and improve its strategic posture vis-à-vis Baghdad.

Israel and Iran have held influence in northern Iraq for decades. Perceiving a strong Iraq as a threat, the Israelis began sponsoring Kurdish militants in northern Iraq during the 1960s. By 1980, Prime Minister Menachem Begin acknowledged to the public that his government had sent weapons and military advisers into northern Iraq. And Iran allied with certain Kurdish factions during the Iran-Iraq war to further drain Saddam Hussein’s war machine. Nonetheless, today the KRG has become a pawn in Israel and Iran’s standoff.

“It’s Realpolitik. By aligning with the Kurds Israel gains eyes and ears in Iran,” observed a former Israeli intelligence officer. According to several sources, the Mossad operates in the KRG to launch covert operations inside Iran and acquire intelligence on Iran’s nuclear program. “Israeli drones are said to be operating against Iran from bases inside the KRG,” wrote Patrick Seale, a British expert on the Middle East. The London-based Sunday Times reported that, according to “Western intelligence sources,” during early 2012 Israeli commandos and special forces members carried out missions in Iran that were launched from the KRG. The Israeli commandos, dressed in Iranian military uniforms, entered Iran in modified Black Hawk helicopters and traveled to Parchin, the site of an Iranian military complex just 20 miles from Tehran, and Fordow, an Iranian military base with an underground uranium enrichment facility. The report claims that these forces utilized advanced technology to monitor radioactivity levels and record explosive tests carried out at the military facilities.

In February 2012, NBC reported that the Israeli secret service had “financed, trained, and armed” the Mojahedin-e Khalq (MEK), an Iranian dissident group that has been responsible for killing Iranian nuclear scientists since 2007 and has operated in northern Iraq for many years. Israel has also provided PJAK with “equipment and training” to carry out attacks against targets within Iran, according to a government consultant with ties to the Pentagon.

The military operations that Iran has waged in Iraq to strike blows against the MEK and PJAK highlight the extent to which Tehran perceives these two organizations as a grave security threat. As these groups collaborate with Israel to undermine Iran’s capacity to acquire nuclear weapons capability, Iran will seek to strengthen its geostrategic posture inside Iraq. Therefore, the Iranian military’s establishment of bases inside the KRG is a strategic action intended to thwart Tehran’s adversaries from cornering it. If Israel were to pre-emptively strike Iran’s nuclear facilities, thus precipitating a grander Middle Eastern war, Barzani may find his act of balancing cordial ties with Israel and Iran incredibly difficult, if not impossible.

The dispersed Kurds, who constitute the modern world’s largest stateless ethnic group, have sought to play off their larger neighbors’ divisions to gain an upper hand against their respective host governments for many decades. The KRG recently achieved a major step toward independence after it signed a contract with Exxon Mobil to drill for oil in Kirkuk. Furthermore, plans to transport Kurdish non-renewable sources of energy to Turkey and international markets may come to fruition. An aide to Iraqi Prime Minister Maliki, Sami Alaskary, warned that “if Exxon lays a finger on this territory… we will go to war for oil and for Iraqi sovereignty.”

The KRG’s alliances with Iran, Turkey, and Israel will be most valued if or when Iraq’s two governments go to war with each other. If Barzani can maintain his cooperative ties with Tehran, Ankara, and Tel Aviv and effectively balance their hostilities and rivalries—while standing strong against Baghdad with the KRG’s 200,000 well-trained Peshmerga fighters—there is reason to believe that amidst the Middle East’s ongoing conflicts and turmoil, the Kurds of northern Iraq may come out on top with an independent state.