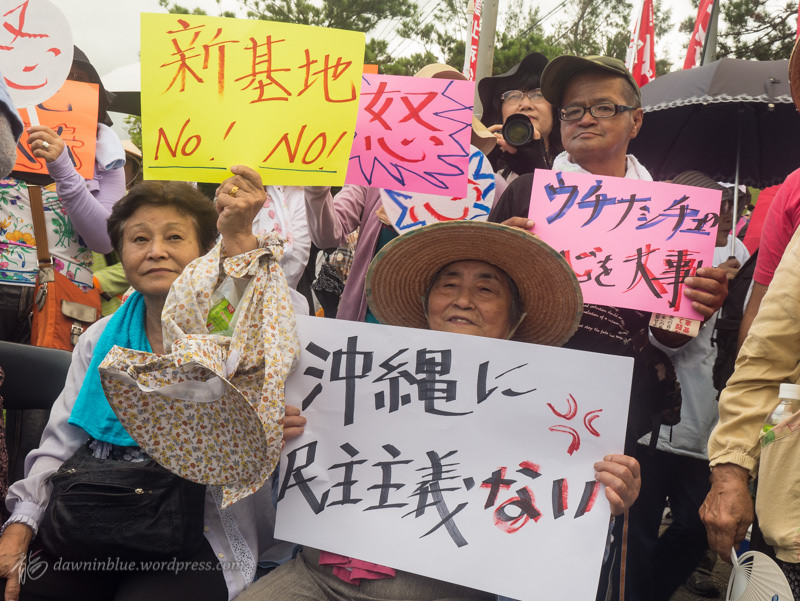 These Two Islands, 1,400 Miles Apart, Are Banding Together Against U.S. Bases

Guam and Okinawa have a shared history of exploitation by their governments — and a shared threat from new military installations.
By Jon Mitchell | March 20, 2018

In January, three residents from the U.S. territory of Guam visited Japan to express their solidarity with Okinawans struggling to block construction of new U.S. military facilities on their island.

During their 10-day stay, the members of Prutehi Litekyan: Save Ritidian — Monaeka Flores, Stasia Yoshida and Rebekah Garrison — participated in sit-in demonstrations and gave a series of lectures explaining the similarities between Guam and Okinawa.

The Japanese prefecture of Okinawa is host to 31 U.S. bases, which take up 15 percent of the main island. On the U.S. territory of Guam, the Department of Defense owns 29 percent of the island — more than the local government, which owns only 19 percent. And if the U.S. military gets its way, its share there will soon grow.

Currently, the Japanese and U.S. governments are planning to relocate roughly 4,000 marines from Okinawa to Guam — a move, the authorities assert, that will reduce the military burden on Okinawa. Tokyo has also started to return land currently used by the U.S. military — but only if new facilities are built elsewhere on the island.

During their visit to Japan, the three Guam residents saw firsthand the problems local residents are facing.

In the small community of Takae — population around 140 — they met residents Ashimine Yukine and Isa Ikuko, who explained what life was like living alongside the marines’ Jungle Warfare Training Center, a sprawling 35 square-kilometer facility that was once a testing ground for Agent Orange and later commandeered by Oliver North.

In 2016, explained the residents, Tokyo mobilized approximately 800 riot police to force through the construction of new U.S. helipads in the area.

“The entire island is a military training ground,” explained Isa. “No matter how much we ask the Japanese government to change things, nothing changes. U.S. military helicopters and Ospreys fly low at day and night. Residents are moving away.”

In 2017, there were 25 U.S. military aircraft accidents in Japan — up from 11 the previous year. Many of these have occurred on Okinawa. As recently as last October, a CH-53E helicopter crashed and burned near Takae.

The Guam residents also visited Henoko, where the Japanese government has begun preliminary work on a massive new U.S. military installation to replace the U.S. air base Futenma, in Ginowan. The base will be built by landfilling Oura Bay, an area of immense biodiversity.

Local residents have been demonstrating against the plan for almost 14 years. The three Guam residents joined Okinawans during their daily sit-in outside the site of the new base.

“I respect the elderly Okinawan demonstrators who go to Henoko to sit-in. They’re physically removed by the riot police up to three times a day,” explained Yoshida. “In some ways, I felt sorry for the police ordered to remove these brave elderly Okinawans who are old enough to be their grandparents.”

The Guam visitors then joined the Takae residents in Tokyo, where they submitted a joint statement to Japan’s Ministry of Defense and Ministry of Foreign Affairs. Demanding an end to the construction of new USMC facilities on the two islands, this is the first time such a statement has been submitted. 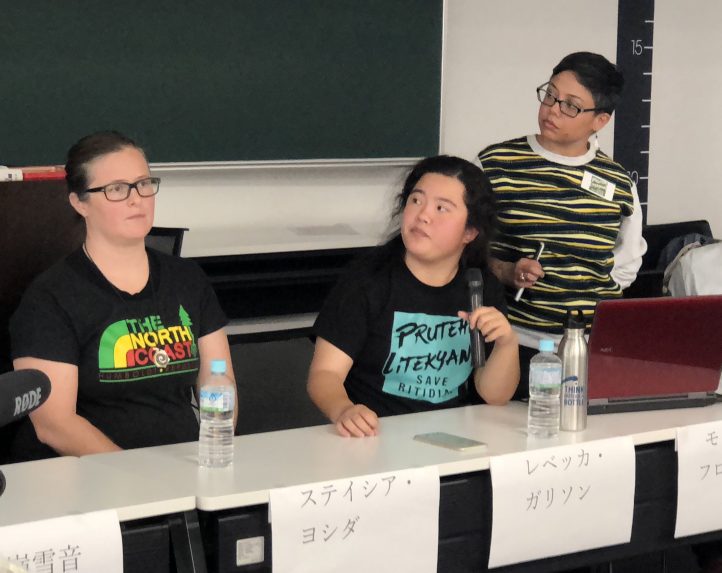 Later, at a symposium at Tokyo University of Science, the residents of Guam and Okinawa explained the similarities between the two islands.

In the years after World War Two, the Pentagon seized land on both islands to build military infrastructure.

On Guam, for example, the military took over land in Ritidian, taking property from Flores’s family. On Okinawa in the 1950s, more than 250,000 residents — over one third of the population of the main island — were dispossessed by land seizures. Much of that land still remains occupied by U.S. military or Japan Self-Defense Forces bases.

For decades, both islands have been contaminated by military operations.

On Okinawa, the drinking water supply near Kadena Air Base has been polluted with PFOS, a substance found in fire-fighting foam which is linked to developmental damage and cancers. At Guam’s Andersen Air Base, the EPA identified multiple sources of contamination, and there are concerns the island’s drinking water aquifer is at risk.

“We’ve lost a lot of leaders at a young age due to this toxicity,” Flores told the audience in Tokyo, citing her island’s high rates of cancer and diabetes.

… And a Shared Present

Military contamination on Guam looks set to worsen with the arrival of thousands of more marines. There are plans to construct a new live-fire range near a wildlife refuge at Ritidian. If realized, the area will be polluted by an estimated 7 million rounds of ammunition a year — and all its concomitant lead and chemical propellants.

Politically, too, both islands have long been marginalized by their respective mainlands.

During the U.S. occupation of Okinawa (1945 – 1972), residents were governed by a U.S. military overseer, and today Tokyo still ignores local demands for base closures. On Guam, although residents possess U.S. passports and pay U.S. taxes, they receive only limited federal funding, have no voting representation in Congress, and cannot vote in presidential elections.

“We’re treated like second class citizens in our own homeland. We have no voice in the process to relocate marines to Guam,” explained Flores.

Garrison, originally from California, knows the dangers of militarism only too well. She told the Tokyo audience how her grandfather had fought in the Battle of Okinawa and suffered from PTSD as a result. Upon his return to the States, he became an alcoholic and died several years later.

“We have to stand up for all these island communities which suffer from militarization,” she said.

Jon Mitchell is a correspondent for Okinawa Times. In 2015, he was awarded the Foreign Correspondents’ Club of Japan Freedom of the Press Award for Lifetime Achievement for his reporting about human rights issues — including military contamination — on Okinawa.