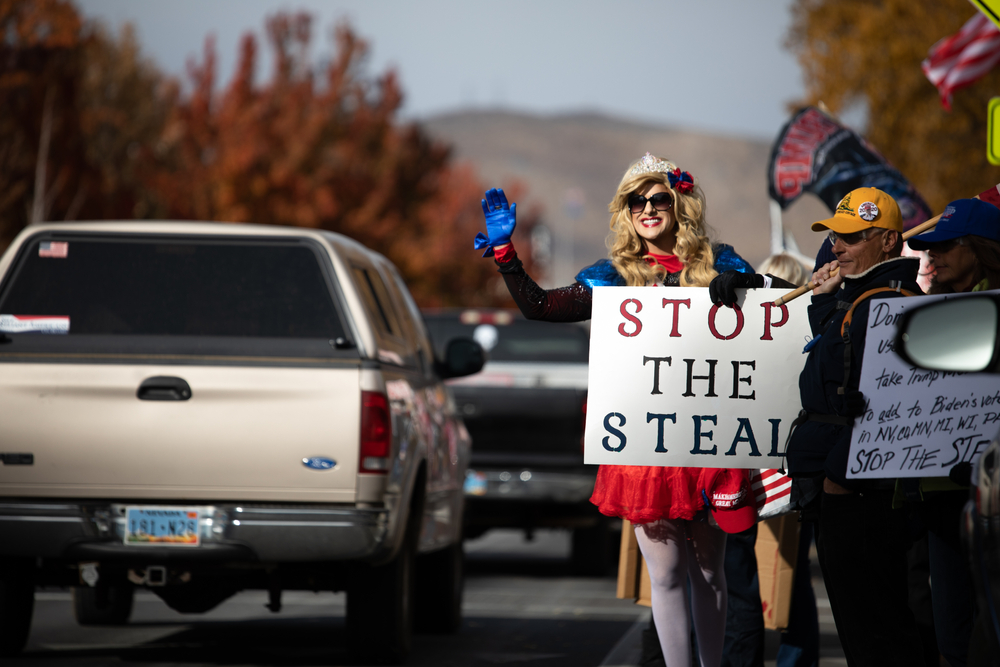 Things May Get Worse Before They Get Better for the U.S.

For many, Trump's ouster is a relief. But his steadfast support among white voters puts his party on a crash course with democracy.
By Walden Bello | November 10, 2020

I’m one of those kibitzers who supported Joe Biden reluctantly from a distance, mainly because I felt that for both the U.S. and the world, he was the lesser evil. And like many, I breathed a sigh of relief when Biden crossed the 270 electoral vote marker.

Then the political sociologist in me took over as I looked at the electoral breakdown by race.

Whites make up around over 65 percent of the electorate of the US. Surveys show that 57 percent of white voters (56 percent women, 58 percent men) went for Trump, despite everything — his awful mismanagement of the pandemic, his lies, his anti-science attitude, his divisiveness, and his blatant pandering to white nationalist groups like the Nazis, Klan, and Proud Boys.

The electoral coalition that was behind Biden’s win was a minority of whites (42 percent, most likely the people with more years in school), the vast majority of Black voters (87 percent), and a big majority of Latinx voters (66 percent) and Asian American voters (63 percent).

Trump’s support among whites was essentially the same as in 2016, with support from women rising to make up for a slight decline in that of men. White solidarity continues to be disturbingly strong, and, more than opposition to taxes, opposition to abortion, and unqualified defense of the market, it is now the defining ideology of the Republican Party.

How did the party of Abraham Lincoln, author of the Emancipation Proclamation, become so completely opposite of what he stood for?

The Party of White Reaction

Over the last five decades, the key feature of U.S. politics has been the unfolding of a largely race-driven counterrevolution against progressive and liberal politics.

The year 1972, when Richard Nixon beat George McGovern for the presidency, was a watershed, since it marked the success of the Republicans’ “Southern Strategy.” It had been Nixon’s aim to detach the American South from the Democratic Party and place it securely in the Republican camp as a reaction to the Democrats’ moving to embrace — albeit haltingly — the civil rights of Black people.

From 1972, the racist colonization of the Republican Party steadily progressed, reaching a first peak with Ronald Reagan, president from 1981 to 1989, whose extremely effective “dog-whistle” was the “welfare queen,” which whites decoded into “Black woman with lots of children dependent on state support.”

His successor, George H.W. Bush, memorably owed his election to his playing up the charge that his opponent Michael Dukakis, owing to a prison furlough bill the latter had supported as governor of Massachusetts, was “responsible” for a Black man, Willie Horton, going on a weekend leave from which he did not return and went on instead to commit other crimes.

This does not mean, of course, that people flocking to the Republicans during this period did not have other reasons for doing so, like opposition to abortion and to tax increases. There were a variety of reasons, but the central driver of this political migration was racism.

That racist Republican base, the majority of whom still believed as late as December 2017 that former President Obama had been born in Kenya, was the key factor that catapulted Trump to the presidency in 2016 (though Obama’s pro-free trade policies also played a crucial role in costing Hillary Clinton white working class voters in the deindustrialized Midwest states).

Turning Away from Democracy

What Trump has managed over the last few years as president is not so much to transform an already racially polarized electoral arena but to mobilize his racist base extra-electorally, combining dog-whistle race-coded language with rhetorical attacks on “Big Tech” and “Wall Street” (and on the latter, it’s just a matter of time before his followers will start zeroing in on the immigrant Indian roots of some very visible members of Silicon Valley and Wall Street’s elites, like Microsoft CEO Satya Nadella and former Citigroup chief Vikram Pandit.)

That is where the danger lies now: the fascist mobilization of a white population that is in relative decline numbers-wise.

History has shown that when large social groups no longer feel they can win by democratic elections, the temptation towards extra-parliamentary solutions becomes very tempting. As the aggregate minority population in the U.S. moves toward parity in numbers with the white population over the next few decades, white nationalism is likely to become more rather than less popular among whites of all ages and across gender lines.

Many people are wondering why Senate Majority Leader Mitch McConnell and most other Republican top dogs aren’t telling Trump to concede, though they most likely know his claims of fraud are bogus. The reason is that they know very well that if they do, Trump’s base would turn against them, endangering their current and future ambitions.

This just goes to show how much Trump and his base have converted the Republican Party into a pliable political instrument, with a leader-base relationship much like the Nazi Party in the Germany of the 1930s.

In fact, Trump is as much a creation of his base as he is creator of that base. What liberal commentators do not understand is that it is not not only a case of Trump whipping up his base for his personal political ends. It is that, but it is much more: that base wants Trump to lie for them and cheat for them and go to hell for them — and if Trump were to stick to the conventions of the transition process, he himself would run the risk of being disowned by them.

For Trump’s people, what is at stake is the maintenance of white supremacy, the enduring material and ideological legacy of the genocide of Native Americans and enslavement of African Americans that are among the key foundational elements of the United States of America. Just as the South was willing to stake everything on the roll of the dice of secession in 1861, a very large part — perhaps the majority of the Republican base — is probably now willing to resort to extra-parliamentary means to stop the tide of equal rights and equal justice for all.

In this connection, the armed pro-Trump convoys that paraded against Black Lives Matter supporters in Portland in September, and the armed band that showed up to intimidate electoral workers counting the votes in Maricopa County, Arizona, on election night, may not be aberrations but a taste of things to come.

It is now evident that the Republicans’ emerging strategy is to refuse any formal concession on Trump’s part and boycott the inaugural ceremonies, then mobilize against the Biden administration as “illegitimate,” paralyzing it over the next four years.

I hate to spell this out, but the current mood in the U.S. approximates that of civil war, and it may just be a matter of time before one side, the Trump forces, translates that mood into something more threatening, more ugly.

Can Biden’s victory be the equivalent of Lincoln’s in the elections of 1860, which led the white South to support the secession spearheaded by the slave-owning aristocracy? Lincoln’s words unfortunately ring true today as they did then: “A house divided against itself cannot stand.”

Walden Bello is an Adjunct Professor of Sociology at the State University of New York at Binghamton. Part of his book, Counterrevolution: The Global Rise of the Far Right (Nova Scotia: Fernwood Publishers, 2019), deals with the social roots of Trumpism.