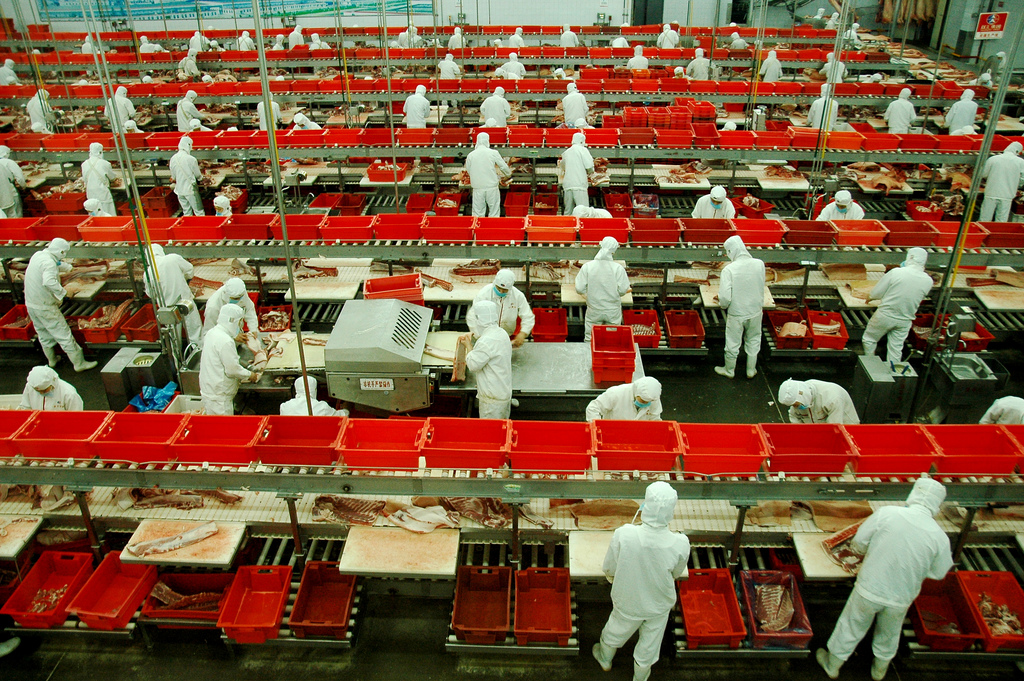 According to the Chinese government’s own statistics, one worker will be poisoned by toxic chemicals every five hours — most of them from benzene. (Photo: Shreyans Bhansali / Flickr)

Apple and other big manufacturers must swap less-deadly chemicals for the cancerous ones poisoning their Chinese workers.
By Andrew Korfhage | May 15, 2014

Ming Kunpeng went to work for ASM Pacific Technology — a chip supplier for Apple — when he was 19 years old. Required to handle the known carcinogen benzene on a daily basis without adequate training or protective gear, the young worker fell ill at the age of 22. Doctors eventually diagnosed him with occupational leukemia.

After a year-long dispute, ASM Pacific Technology agreed to compensate Ming for his illness, but the settlement was insufficient to cover the care he needed. On December 28, 2013, this young man became one of the much-publicized Chinese electronics-worker suicide cases.

He took his own life, jumping from the top of the hospital where he was receiving treatment.

Ming’s story is just one of many told in filmmakers Heather White and Lynn Zhang’s new short-form documentary, Who Pays the Price? The Human Cost of Electronics.

In their film, White and Zhang explore the use of dangerous toxic chemicals in Chinese factories. They focus on the effects of these chemicals on the millions of workers exposed while making the iPhones, iPads, and other electronics that global consumers have come to depend on.

Considering that three-quarters of the entire population of the planet now has access to a mobile phone, the scope of this problem is huge. Roughly half of these devices are made in China, where carcinogenic benzene (banned as an industrial solvent in many countries) is allowed, and where employers often don’t provide workers with adequate protective gear. Electronics factories use reproductive toxins like toluene and neurotoxins like n-hexane as well.

“I’ve now been through 28 chemotherapy treatments,” says Yi Yeting, a Chinese factory worker poisoned by benzene who shares his story in the “Who Pays the Price?” film. “My bones hurt a lot. It feels like thousands of ants biting my insides.”

As the demand for cheap electronics grows, clearly the workers pay the price. According to the Chinese government’s own statistics, one worker will be poisoned by toxic chemicals every five hours — most of them from benzene.

Fortunately, there are alternatives.

The International Chemical Secretariat, a non-profit organization based in Sweden, provides companies with substitutions for toxic chemicals on its “Substitute It Now” list. The list details 626 chemicals harmful to human health and provides alternatives, such as cyclohexane and heptane, safer solvents similar to benzene.

Toxicology experts familiar with Chinese factory procedures have estimated that the smartphone companies could replace benzene with safer solvents at a cost of around $1 per phone. With companies like Apple raking in profits of $37 billion in 2013, electronics manufacturers can afford to take such steps to protect workers’ lives.

“We want brands to take responsibility for working conditions at their supplier factories,” says Pauline Overeem, Network Coordinator for GoodElectronics, an international non-profit organization working to clean up the electronics supply chain. “Banning benzene is a part of that.”

In the summer of 2013, Apple unveiled a new ad campaign called “Our Signature.”

Over footage of happy consumers enjoying their Apple products by listening to music, snapping photographs, studying in school, and video-chatting with friends, a soothing voiceover states, “This is what matters: the experience of a product. How will it make someone feel? Will it make life better?”

Apple should ask workers like Yi Yeting how working with benzene has made him feel, and the company should have asked Ming Kunpeng if Apple’s products made his life better.

Electronics companies must take responsibility for their supplier factories no matter where in the world they choose to make their products. They must halt the use of benzene and other chemicals dangerous to harm human health starting today.