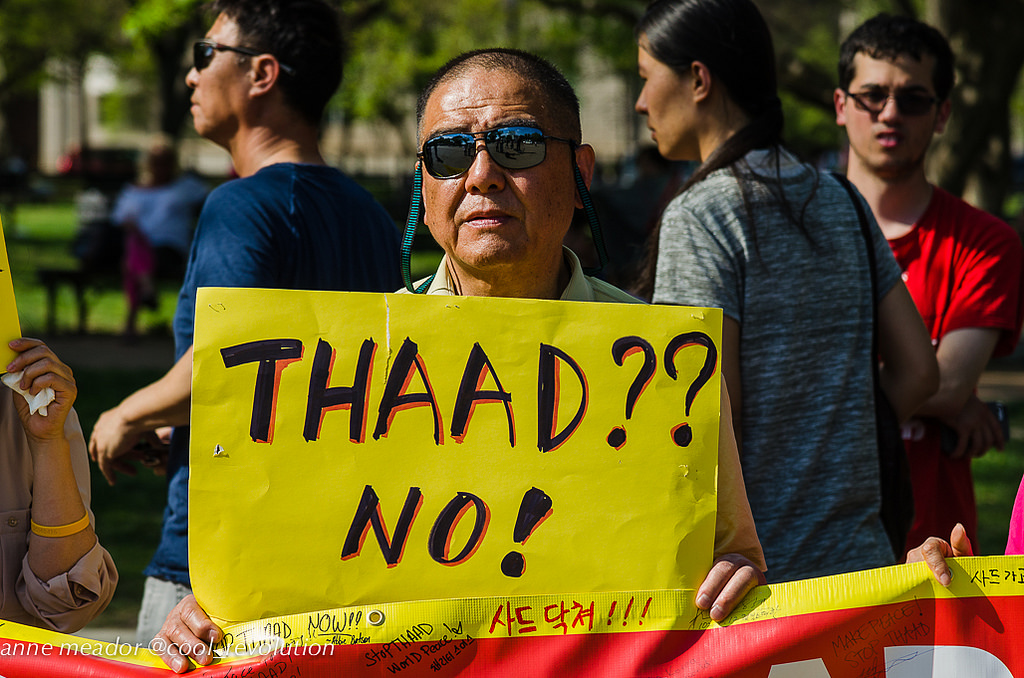 Trump and the Rush to Deploy THAAD

The United States is pushing a hasty deployment of a missile defense system in South Korea. The backlash could be huge.
By Raekyong Lee | May 3, 2017

The Korean police swarmed onto the golf course in Seongju, just 300 kilometers southeast of Seoul, just before dawn on April 26. The officers pushed aside the dazed protesters and escorted a group of US Army military trailers that carried the critical parts for the THAAD (Terminal High Altitude Area Defense) missile defense system.

The deployment of THAAD in Korea has become extremely contentious since China expressed its strong opposition. The sudden deployment of the AN/TPY-2 radar system and two missile launchers and interceptors a week before the Korean presidential election on May 9 has created even greater controversy. It looks for all the world like a bid to make deployment a fait accompli even as the liberal candidate Moon Jae-in, who is the frontrunner in several polls, suggests that the system requires further debate.

Although the incident did not grab the headlines around the world, it was an obvious effort to circumvent the Korean political process. It also marks a fundamental shift in Korea-US relations .

But that’s not all. President Donald Trump also went on to demand that Korea pay one billion dollars for the cost of the deployment, even though the Korean military is not actually purchasing the missile defense system and has agreed to deployment in the face of strong opposition.

President Trump went on to condemn the KORUS Free Trade Agreement, calling it a “horrible deal” and threatening to “terminate” it. Trump has linked together security issues with trade issues in an aggressive manner, hinting that the crisis might be resolved if Seoul were more accommodating in trade negotiations.

This mix of trade issues with security issues goes against the grain of the entire shared-values strategy that the United States has employed since the Second World War. Trump suggests, in so many words, that the military alliance is an economic exchange and that THAAD, or just about anything, can be modified or even eliminated if the price is right. Though this approach may seem like common sense to Donald Trump, the implication is that the United States military is a mercenary force whose purpose is not determined by a commitment to democracy and free markets but rather the balance in the national treasury.

And lo and behold, on May 1, Trump stated that he would be “honored” to meet with Kim Jong-un, the leader of North Korea, a country that Secretary of State Rex Tillerson has refused to engage in discussions, despite numerous offers by the Chinese. At other times, the Trump administration has suggested that military action against North Korea was imminent.

Because of all these zigzags in U.S. policy, South Koreans perceive the Trump administration as irrational, self-centered, and impulsive. The demand for a large payment for THAAD has increased Moon Jae-in’s skepticism of the system and boosted anti-American sentiment in the election. Moon is now openly critical of THAAD early deployment even in the face of conservative criticism.

The shift in Korean perceptions of the United States is driven by the complete lack of concern for procedure in the decision on THAAD. Acting president Hwang Kyo-ahn is not authorized to make such a critical decision. Also, former President Park Geun-hye agreed initially to THAAD without consulting with the National Assembly.

There has been literally no debate among legislators on THAAD. The issue is simply not a matter of a North Korean threat. China perceives THAAD as an effort to undermine its own defensive capabilities. Although experts can debate the fine points, deployment will trigger an arms race in Northeast Asia that could draw in Korea, Japan, Russia, and perhaps other nations. China currently has under 300 nuclear weapons (as opposed to the United States with almost 7,000). Worried that THAAD could neutralize this relatively small arsenal, China could increase that number to a thousand or more.

We do not know how the rapid deployment of THAAD was decided upon. Most likely it was an agreement reached between Kim Kwan-Jin, head of national security office in the Blue House, and Admiral Harry Harris, head of the US Pacific Command. Both are famous for their bellicose declarations and their close ties to military contractors. It seems less likely that Donald Trump was involved in the process.

But Donald Trump has just thrown oil on the fire with his recent comments that Korea had once been a part of China—according to Xi Jinping. He has eliminated all Asia experts from the State Department and has no one around him who has any expertise on the region. This lack of actual understanding combines with the astonishing capacity of the U.S. president to reverse himself on North Korea.

A Moon administration is likely to pursue improved relations with North Korea, in contrast to the last ten years of conservative government. It will also encounter at least the same hostility that the Roh Moo-hyun administration encountered from the George W. Bush administration.

Moon is likely to try to bring back some version of Kim Daejung’s “sunshine policy,” which promoted diplomatic, economic, and cultural engagement with the North. Conservatives thought they’d put a stake through the heart of this engagement policy last year when they shut down the last vestige of cooperation, the Kaesong Industrial Complex, run jointly by the North and South. Such efforts to reopen dialog with North Korea will likely be combined with a push for the transfer of operational wartime control of the military to Korea over the next few years and a Korean foreign policy that is more independent of the United States.

In fact, Korea could well be the one of the most independent-minded of all the United States allies under a Moon administration. Obama’s “strategic neglect” of North Korea and inaction in the face of nuclear tests has caused enormous frustration for South Korea. A Moon administration could forge its own policy toward the North that would be substantially different from Washington’s.

North Korea is fully aware of the manner in which outside power overthrew governments in Libya and Iraq because they lacked sufficient deterrence. As a result, Pyongyang is unlikely to make any easy compromises, especially as Kim Jung-un has staked his legitimacy on the nuclear program as an assertion of national autonomy.

But for all the rhetoric of the need to stand up to North Korea, American engagement in Korea is in retreat. Increasingly China offers the real economic opportunities to Koreans, and Chinese language schools are popping up all over the place. By contrast, Citibank announced the closure of one-third of its branches in Korea in April, and the percentage of Americans among foreigners in Korea has declined significantly.

Astonishingly, in the face of threats of war with North Korea, the United States not only no longer has an ambassador to the Republic of Korea—the last ambassador Mark Lippert was asked to step down on January 19—there is not even a candidate. Korea was essentially left out of the conversation between Trump and Shinzo Abe at the White House in February and also between Trump and Chinese president Xi Jinping at Mar-a-Lago. The failure of Secretary of State Rex Tillerson to have dinner with acting president Hwang Kyo-ahn when he visited Korea in March only added insult to injury.

Ultimately, the THAAD anti-missile system is part of a long-term relationship with the United States that dates back to the late nineteenth century. Overall, although North Korea is getting front-page coverage in the mainstream media, South Korea has not registered as a major player for the Trump administration. If steps are not taken to find common ground and engage Koreans about some other topic than the North Korean threat, there is a danger of a rise in anti-American sentiments and a corresponding drop in American influence.

Raekyong Lee is president of The Tomorrow, a leading progressive think tank in Seoul, Korea, dedicated to economic and security issues. He was deeply involved in the democracy movement in the 1970s and 1980s in Korea and writes frequently about international relations and politics.