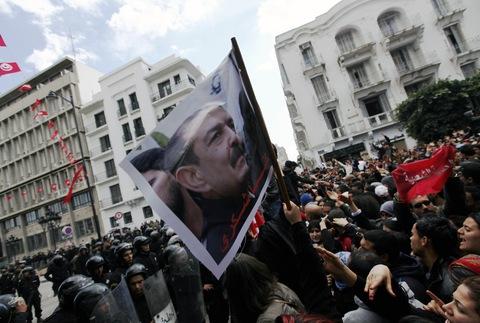 The assassination of a progressive Tunisian leader is the culmination of a full-blown socio-economic and cultural crisis that has been brewing in the country for the past two years.
By Rob Prince | February 20, 2013 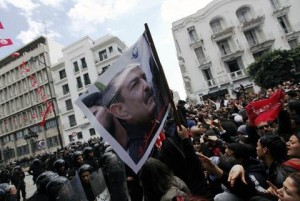 Once again, Tunisians’ anger has overcome their fear.

Spurred by a political assassination, tens of thousands have taken to the streets to protest the state into which their country has fallen. The same sense of decency and dignity that propelled them to the streets before drives them on now.

The euphoria that marked the success of the Tunisian revolt, triggering the region-wide Arab Spring, has long dissipated. In its place, sharper and meaner domestic struggles over the direction of the country’s future have surfaced. Two years after a united populace expelled dictator Zine Ben Ali, Tunisia is a country deeply divided along religious and class lines.

Tensions came to a head in early February.

On the morning of February 6, three masked men opened fire on Choki Belaid in front of his Tunis home. A leader of the so-called “Popular Front,” a coalition of left-leaning and secular parties, Belaid had fiercely criticized the ruling Ennahda Party for its laxity in reigning in Salafist brown-shirt violence and its acquiescence to IMF and World Bank demands to open up the Tunisian economy. Many Tunisians—including Belaid’s widow—immediately concluded that the government had ordered the hit.

The assassination has set in motion Tunisia’s most serious political crisis since the ouster of former dictator Zine El Abidine Ben Ali. In the current confusion, one thing remains clear: Ennahda—along with its leader, Rachid Ghannouchi—has lost a great deal of its credibility. With opposition mounting dramatically, the government’s grip on power is sliding.

There is now an open split within the party’s ranks. In a surprise (and politically intelligent) move, Prime Minister Hamadi Jebali dissolved his cabinet and promised to put together another one that would be more reflective of the nation’s political makeup. It was a last-ditch effort to save the Ennahda-led government by appeasing at least a portion of the opposition. Jebali was immediately countered by Ghannouchi, who “repealed” Jebali’s decision at an emergency meeting of the party leadership. Jebali resigned days later, intensifying an already terse and fluid situation.

Exacerbating the crisis, a number of opposition members have pulled out of the country’s constituent assembly, making the body’s task of coming up with a new constitution difficult if not impossible.

Additionally, Ennahda’s major coalition partners—the Congress of the Republic (the party of President Marzouki) and The Democratic Party for Labor and Liberties—have threatened to pull their members from the cabinet and have given the government a week to make long-promised reforms.

On February 8, the day of Belaid’s funeral, at least 50,000 people marched in Tunis, on one day’s notice, to protest the killing. Slogans and chants for the killers to be brought to justice were accompanied by demands that the government step down. It was nothing short of a warning shot across Ennahda’s bow. In Tunis, Siliana, and Sidi Bouzid, Ennahda offices were trashed.

On the same day, the General Union of Tunisian Workers (UGTT) called a one-day strike that was broadly observed throughout the country. The ruling coalition has been increasingly hostile to the country’s labor movement, first excluding unionists from a political role in the running of the state and then increasingly turning on them, using the army to put down strikes—with Salafist thugs attacking union headquarters on a number of occasions.

For many, the current protests bring back memories of the demonstrations that brought down the Ben Ali regime just two years ago. Nor do people forget that popular sentiment also forced the hand of two transitional governments in the early post-Ben Ali period.

Tunisia’s leaders are now scrambling to contain the damage. Denying any responsibility for Belaid’s death, Ennahda tried to mount its own mass demonstration on February 9. It turned out to be more of a show of weakness and isolation than anything else. Press reports indicated that a paltry 3,000 supporters turned out, including a fair number of Salafists waving sharia banners.

A Tale of Two Assassinations

Although there have been other assassinations of political figures in modern Tunisian history, other than the 1952 murder of Tunisian labor and nationalist leader Farhat Hached, none has triggered the kind of mass reaction that Belaid’s has. Hached was killed in 1952 by a French hit squad called La Main Rouge (The Red Hand), apparently working directly out of the office of the French governor general, Jean Hautecloque.

To compare Belaid’s assassination to Hached’s is to imply that the state at its highest level is, once again, complicit in the assassination of an important Tunisian political figure—an allegation that the Ennahda Party vociferously, if ineffectively, denies.

Chokri Belaid was, at the very least, a talented and principled Tunisian progressive with deep roots in the country’s labor movement, winning admirers far beyond the secular left. The political movement that he helped lead, although starting to gain traction in the polls, is still modest. But the popular outrage over his death indicates the degree to which his vision for post-Ben Ali Tunisia resonates far beyond the Front’s supporters, including broad sectors of the population in both the urban coastal and rural interior regions.

Belaid’s assassination is the culmination of a full-blown socio-economic and cultural crisis that has been brewing in Tunisia for the past two years. It underlines and exposes the severe weakness—and ultimately the debilitating factionalism—of the Ennahda Party, highlighting the party’s continued failure to address the country’s deepening economic crisis. It underscores the party’s cynical use of religion to divide a country that is 99-percent Sunni Muslim along modernist-medievalist lines and its indulgence of, if not outright collusion with, Salafist and Wahhabist extremists who have been rampaging the country unchallenged by the state for some time now.

During the Ben Ali years, Tunisia was considered a poster child of IMF-World Bank structural adjustment policies, policies that blew up in Ben Ali’s face and were at the heart of why he was forced to flee the country. High unemployment rates, structural imbalances between prosperous urban areas on the coast and impoverished regions in the interior, low wages, and a deteriorating social net combined with seething repression to create the political Molotov cocktail that unseated the dictator.

In the past two years virtually nothing has changed on the socio-economic front. Ennahda has lacked any vision to get the country out of its economic rut around which a national consensus could be built. Instead it is more of the same. If anything, the Tunisian economy is even more open to global capital today than it was during the Ben Ali days.

For Ennahda, the party is over. As has happened frequently in the past, killing the man, Chokri Belaid, has made the ideals for which he died that much more precious to the Tunisian people. Like Farhat Hached—and maybe Mohamed Bouazizi—his legacy lives on.