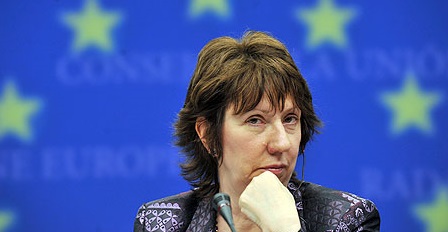 Catherine Ashton and Wendy Sherman navigated through the diplomatic shoals of the Iran nuclear deal.
By Merle Lefkoff | November 26, 2013

The Right Honorable Baroness Catherine Ashton of Upholland, daughter of a coal-mining father, single mom, and the first person in her family to go to college, climbed into a helicopter last August to visit the deposed President of Egypt, Mohammad Morsi, being held in a secret location. The first Representative for Foreign Affairs of the European Union, and a sophisticated Middle-East hand who had publicly declared her sympathy with the Palestinian cause, she was the only person from the West trusted by the Egyptians to meet with Morsi. Last weekend, “Cathy” Ashton was heralded as one of the top negotiators sealing the first-stage agreement on halting the Iranian nuclear weapons program.

About the same time Ashton was meeting with President Morsi, Wendy Sherman, the State Department’s Undersecretary for Political Affairs, was facing a difficult Senate briefing on Iran, in which she made some rude comments. A long-time Washington insider, lobbyist, Congressional staffer, and consultant, Sherman comes from a prominent Jewish family in upstate New York and is widely considered one of Israel’s most supportive high-level friends. At the same time, she is also known as an experienced and tough negotiator on nuclear issues, a “bad-ass” according to one CNN foreign affairs reporter. As Chief U.S. nuclear negotiator, she joined Ashton in the final talks in Geneva, heading the U.S. negotiating team for the last round.

Can it be? The team leaders at the final negotiations on an interim deal with the Iranians were both WOMEN, and with very different portfolios on the most delicate situation in the Middle East, the Israeli-Palestinian conflict. 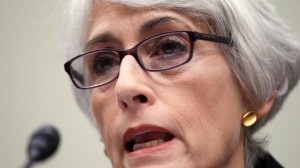 Almost too fitting to be true, Ashton started her public career as co-chair of the Campaign for Nuclear Disarmament in the 1980s, a prominent NGO in the British peace movement. When she was plucked from relative obscurity to become Foreign Affairs chief at the EU, her detractors were brutal in their comments. Known as the “fourth choice” and called in print “a garden gnome” she felt compelled to prove herself when characterized as a practitioner of “soft power,” referring directly to the “latent sexism” coming her way.

“I’m always interested in the descriptions of how I do things,” she said in an interview with the Guardian newspaper. “The only thing I want to be is effective. It is probably true that as women we navigate our lives differently because we’re navigating relationships, perhaps…. I guess a lot of the things I’ve done in my life have been about trying to find solutions or trying to build consensus, so it’s partly me, partly the job, partly that I’m a woman.”

Undersecretary Sherman also came to prominence from an unconventional start as a social worker and as director of “Emily’s List,” an organization that raises money for pro-choice Democratic women candidates. She attached herself to two powerful women, former Secretaries of State Madeleine Albright and Hillary Clinton and rose quickly through the ranks of the U.S. State Department. Sherman went to North Korea in a failed attempt to negotiate with the North Koreans on nuclear non-proliferation, and she brought home her lessons there as reinforcement for her determination to find success with the Iranians. Sherman plays “bad cop” to Ashton’s “good cop,” and they make a formidable team.

Media pundits and academic analysts have been slow to realize that a very different kind of diplomacy is at work in the Iranian breakthrough, and it is worth considering that its success was due in part to a negotiating process I dare call more “feminine” and “emergent.” At risk of over-simplification, I’d like to report that neuroscience research suggests that women are better at communicating than men, and that advantage results in the formation of more trusting relationships. The ability to “navigate relationships” as Ashton suggested, may have been one of the key elements in the success of the negotiations. Navigation needs patience to arrive at the proper coordinates, “a 360-degree view” according to Sherman.

While we applaud the brilliant determination of both Secretary of State John Kerry and the new President of Iran, Hassan Rouhani, as they begin a long and difficult journey down a new road, we celebrate the victory won by Wendy Sherman and most especially Baroness Catherine Ashton, the “closers” on top and out front, finishing the job with soft diplomacy and a 360-degree view!

Merle Lefkoff, Ph.D. is the founder and CEO of the Center for Emergent Diplomacy.