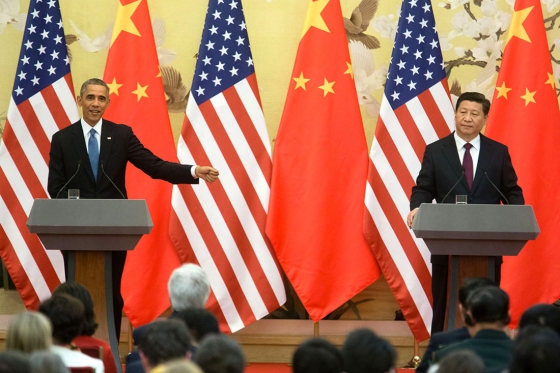 Why the U.S.-China Climate Deal Is Bad News for Climate Activists

Hopes that last December’s climate talks in Lima would reverse the momentum towards climate catastrophe were dashed by an event that was announced three weeks before: the so-called U.S.-China climate deal.

Said to be the product of nine months of secret talks, the agreement between the United States (history’s leading carbon emitter) and China (today’s leading emitter) was lauded in many quarters as a “breakthrough.”

Climate skeptics to the end, Republicans in the United States predictably criticized the deal as detrimental to the U.S. economy and skewed in favor of China. But the deal evoked a fair share of criticism from experienced climate observers as well.

The key provision triggering dismay was the agreement that China would not begin reducing its emissions until 2030. And the U.S. commitment to bring down its own emissions by 26 to 28 percent from 2005 levels — while significant — will not be enough to derail the planet from the track towards a 2-degree centigrade increase in temperature by the turn of the century. For the U.S. cuts to begin to make even the slightest dent, the baseline should have been 1990 levels, which have long served as the universally agreed standard.

Moreover, the critics point out, the deal does not have the force of law. This is crucial, since mere executive action will not be sufficient to accomplish the cuts that President Obama’s negotiators promised. And the new Republican-controlled Congress is not likely to legislate the powers necessary for the Democratic president to deliver on his promise to the Chinese.

Obama and Xi’s Message to Lima

It was, however, the message the agreement delivered to the negotiators from over 190 countries assembling in Lima during the first two weeks of December that proved most disconcerting.

What Obama and Chinese Premier Xi Jinping were telling the delegates was something like this: “We’re not going to subject what we decide to agree on to a multilateral process. Moreover, what we offer in terms of emissions cuts will not be determined by some objective assessment of what we should be offering, guided by science and the principles of equity, but by what we ourselves decide to place on the table. Also, compliance will be purely voluntary.”

The U.S.-China accord was, of course, just one of the elements that influenced the outcome of the negotiations in Lima. However, it was decisive.

In short, the unilateral and non-transparent process of setting voluntary emissions cuts dashed hopes for setting up a more rigorous climate regime — one based on mandatory emissions cuts — at the December 2015 talks in Paris. Moreover, the deal provided the formula for a face-saving retreat by developing countries from their tough stand that it should be the rich industrialized countries that bear the burden of emissions cuts — a stance that was encapsulated in the principle of “common but differentiated responsibilities.” Rich countries have generally resisted this demand.

The phrase that broke the deadlock on this front in Lima was copied and pasted from the U.S.-China accord, which modified the principle to “common but differentiated responsibilities and respective capabilities, in light of different national circumstances.”

For the rich industrialized countries — and the big emerging economies as well — this blurring of the lines was a major victory, since it meant that dealing with the greenhouse gases that have accumulated owing largely to their own production and consumption will now be every country’s responsibility. And saying something is everyone’s responsibility really means that it’s no one’s responsibility.

With China joining the developed countries in promoting this redefinition, many developing countries felt they had been left with no option but to sign on to the “Lima Call for Climate Action” at the conclusion of the talks. Not surprisingly, many felt they were left high and dry by China’s climate “pivot,” as some negotiators termed it.

To Lidy Nacpil of the climate advocacy organization Jubilee South, the Lima outcome is “another fatal step in the strategic retreat from the Kyoto Protocol,” which had bound the developed countries to mandatory emissions cuts. Nacpil and other climate activists see the Lima declaration as setting a weak foundation for the new climate regime — which is supposed to be inaugurated in Paris in December 2015 — that will replace the Kyoto Protocol. The centerpiece of the coming regime will be the so-called “Intended Nationally Determined Contributions” (INDCs), or the voluntarily offered emissions cuts that will be made by countries in lieu of mandatory pledges.

Flaws of the Lima Declaration

Perhaps the most comprehensive and incisive analysis of the Lima outcome comes from Pablo Solon, executive director of the Bangkok-based analysis and advocacy institute Focus on the Global South. Formerly Bolivia’s ambassador to the United Nations, Solon outlines the main flaws of the Lima agreement:

Solon reserves his strongest criticism for the lack of a compliance mechanism to ensure that countries live up to their voluntary pledges. “What happens if a big polluter fails to cut emissions on time and damages a vulnerable country?” he asks. “No mention is made of a mechanism to demand and sanction governments and corporations for their inaction. All the options in the text consider only processes of review or assessment. A climate agreement without a strong compliance mechanism is just a political declaration.”

Solon’s concern is a matter of great importance to developing countries, since over the last few years, Canada, Russia, and New Zealand have withdrawn from the Kyoto Protocol, and Australia and Japan have failed to reach their legally binding targets under the convention. Yet these countries have not been sanctioned.

What’s most damaging is the watering down of the principle of “common but differentiated responsibilities” as a result of joint lobbying by chief U.S. negotiator Todd Stern and his Chinese counterpart, Xie Zhenhua. The new formulation, according to Solon, “will dilute more and more the historical responsibility for greenhouse gas emissions of developed and emerging economies.”

The big losers are the poor underdeveloped countries. The big winners are China and the United States, which according to Solon now “have an agreement to erase their responsibility for the climate chaos they created.”

In the past, the United States and China used each other’s intransigence as an excuse to avoid making cuts in their carbon emissions. But the world was becoming weary of this game, forcing the two to drop their pretense of opposing each other in favor of a show of cooperation. With their climate agreement and the Lima Declaration they played a central role in crafting, the two biggest emitters have set the parameters of global climate action.

Unless these parameters are resisted, they will all but ensure that a destabilized climate will be this generation’s catastrophic legacy to our descendants.

Foreign Policy In Focus columnist Walden Bello is a member of the House of Representatives of the Philippines and a long-time climate activist. An earlier version of this piece appeared in Telesur English.