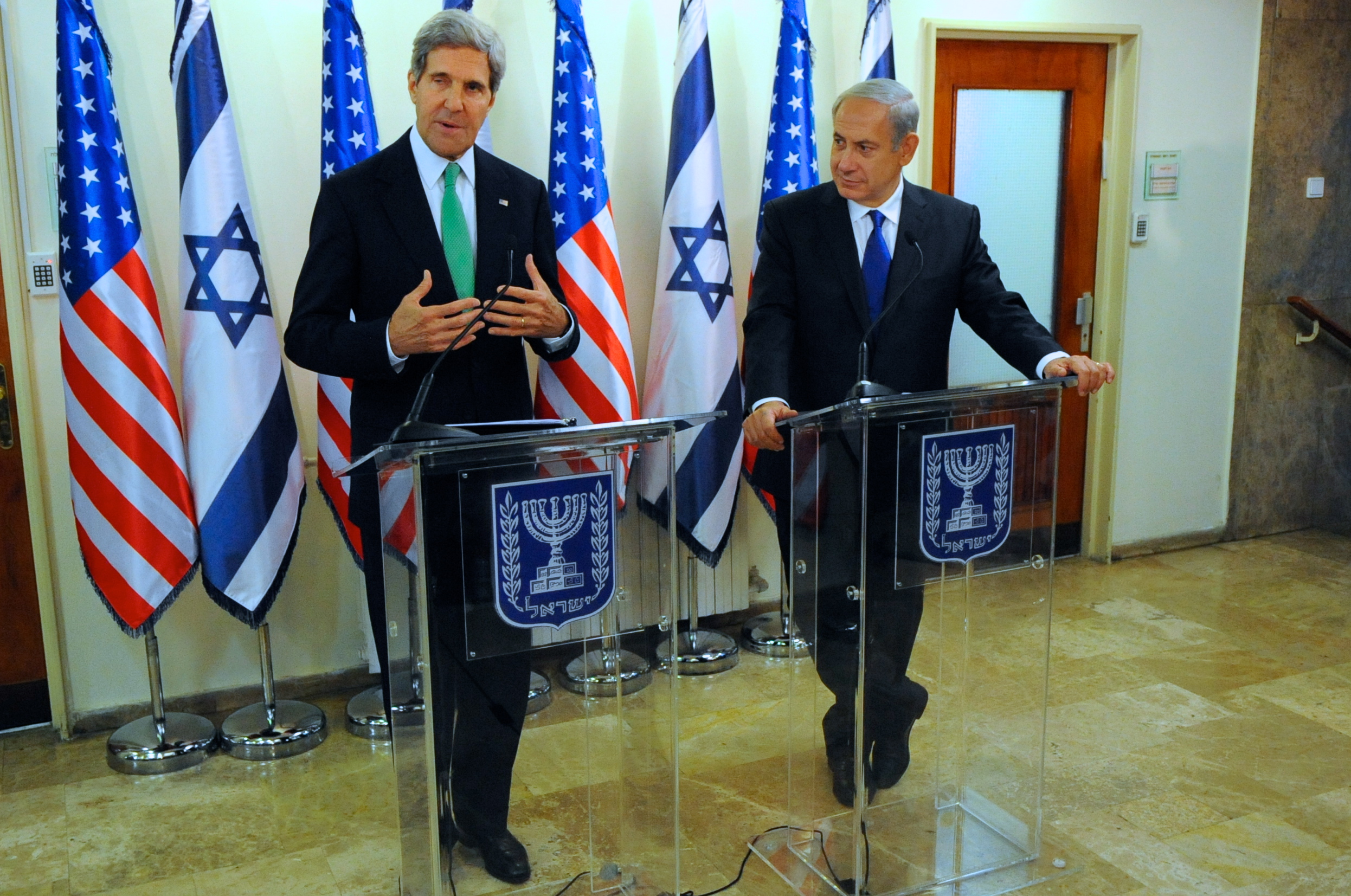 In a sign of how absurd U.S. Middle East policy has become, the White House has characterized Palestine's membership in international human rights conventions--which would entail new human rights obligations for the Palestinian Authority--as a "threat to Israel." (Photo: Wikimedia Commons)

U.S. Culpability in the Failure of Israeli-Palestinian Peace Talks

The failure of John Kerry's Israeli-Palestinian peace talks showed just how extreme U.S. policy on the conflict has become.
By Stephen Zunes | June 5, 2014

The Obama administration deserves much of the blame for the failure of the latest round of Israeli-Palestinian peace talks.

It had originally been hoped that the United States would present a binding framework along the lines of what moderate Israeli and Palestinian political leaders had agreed to in unofficial talks in Geneva in 2003: Israel would recognize a Palestinian state based roughly on the pre-1967 borders with mutual territorial swaps, which would leave the Palestinians with 22 percent of historic Palestine and allow Israel to keep the remaining 78 percent; the Palestinian state would be demilitarized and all irregular militias disarmed; illegal settlements in occupied Palestinian territory near the Israeli border—encompassing close to 80 percent of the settlers—would be incorporated into Israel while settlers in the more remote settlements would be required to return to Israel; there would be no right of return for Palestinian refugees to Israel, but there would be international assistance in helping them resettle in the new Palestinian state; and some Israeli troops would remain along border crossings between the Palestinian state and its Arab neighbors, eventually to be replaced by international forces.

The Palestinian government agreed to these terms. Israel rejected them. Rather than make public this framework, and thereby hope the Israeli public would pressure its right-wing government to compromise, the Obama administration instead insisted that “both sides” had shown a lack of will to compromise.

An interview with an anonymous U.S. official close to the peace talks in an Israeli publication confirmed numerous other reports that, despite the Obama administration’s claims to the contrary, the Palestinian side made major concessions while the Israeli side essentially refused to make any, generally refusing to talk about any substantive issues.

A host of Democratic and Republican former officials—including a former national security adviser, secretary of defense, chair of the House Foreign Affairs Committee, trade representative, and undersecretary of state for political affairs—went on record arguing that the Obama administration would have to challenge the Israeli government’s hard line towards the Palestinians in order for the peace process to be successful. Unfortunately, the White House apparently had no interest in doing so.

Instead, Washington has focused on Palestinian Authority President Mahmoud Abbas’s refusal to give in to U.S. and Israeli demands that he recognize Israel as a “Jewish state.” While the Palestinian government, the Palestine Liberation Organization, and the ruling Fatah party have all recognized the state of Israel for more than 20 years, the Obama administration has effectively moved the goalposts by declaring that recognizing the Israeli government, acknowledging its right to exist, and providing security guarantees is not enough, insisting that the Palestinians explicitly recognize the state of Israel’s ethno-religious identity as well. No previous administration has put forward such a requirement. President Carter never made such demands on Egypt, nor did President Clinton require this of Jordan as a condition for their peace treaties with Israel. Abbas has said that Israel can identify itself however it wants, but—given that 20 percent of the Israeli population is ethnically Palestinian Arab—it would be politically impossible to agree to something that would acknowledge second-class status for other Palestinians.

Never in history has any country been required to recognize the ethnic or religious identity of another state as a condition for peace. It appears, then, that the Obama administration’s demand may have been an effort to destroy any chance of a peace agreement and leave an opening to blame the Palestinians—despite their agreement to virtually every other issue—for the failure of the peace process.

The failure may also come from President Obama’s trusting Secretary of State John Kerry, a longtime supporter of the Israeli right, to play such a key role in the peace talks. In 2004, Kerry unconditionally endorsed an Israeli plan to unilaterally and illegally annex large areas of the West Bank, leaving the Palestinians with only a series of small non-contiguous cantons surrounded by Israel as their “state,” a proposal denounced worldwide as a violation of the UN Charter, a series of UN Security Council resolutions, and basic principles of international law. Indeed, Kerry has long insisted that it was “unrealistic” to demand an Israeli withdrawal from its occupied territories. (By contrast, Kerry has demanded that Russia withdraw completely from Crimea, citing the illegality of any country acquiring “part or all of another state’s territory through coercion or force.”)

Recognizing the failure of the United States to be an honest broker, the Palestinian government has been seeking to enhance its diplomatic leverage by redoubling its efforts to be recognized as a full state and acceding to a series of international conventions. The Obama administration and Congress have strongly condemned these moves, insisting that while Israel is free to join various international conventions addressing human rights and international law (despite the current right-wing government’s failure to uphold many of its required obligations), Palestine has no right to join these same conventions. In early April, Kerry cancelled scheduled peace talks with Abbas in protest of the Palestinian government’s efforts to join the Geneva and Vienna Conventions and UN agencies dealing with women’s and children’s rights.

As an indication of just how extreme U.S. Middle East policy has become, the administration has described Palestine’s efforts to join these 15 international conventions addressing human rights and international law as “a threat to Israel.” In reality, none of conventions impact Israel in any way. The Obama administration insists that allowing for any application of international humanitarian law—even Palestinian ratification of human rights treaties that would help end torture or attacks on civilians by Palestinians—would somehow interfere with the peace negotiations. As Bill van Esveld of Human Rights Watch observed, “By blocking accountability in the name of advancing the peace process, the U.S. has facilitated the settlements and other war crimes that are undermining the prospects for peace.”

The contempt the administration has for human rights could not be better illustrated than in a recent speech by Martin Indyk, Obama’s special envoy for Israeli–Palestinian negotiations, in which he criticized the Palestinian government’s “supposed pursuit of ‘justice’ and their ‘rights,’” in an apparent effort to ridicule the very notion. The words “justice” and “rights” are in quotation marks in the official transcript, and a video shows him making quote marks with his fingers.

In another move decried by U.S. officials, Fatah and Hamas announced the formation of a unity government in order to prepare for elections next year. Though no Hamas officials will serve in any cabinet posts and President Abbas has reiterated Palestine’s commitment to a two-state solution and to all previous agreements, State Department spokeswoman Jen Psaki defended Israel’s decision to suspend the talks by saying, “It’s hard to see how Israel can be expected to negotiate with a government that does not believe in its right to exist.”

Meanwhile, a broad bipartisan effort is growing in the Congress to blame the failure of the peace talks exclusively on the Palestinians and to force the administration to cut all ties with the Palestine Authority.

Unless and until the Obama administration decides to end its support for the Israeli right and support Israeli and Palestinian moderates, there will be no hope for peace.