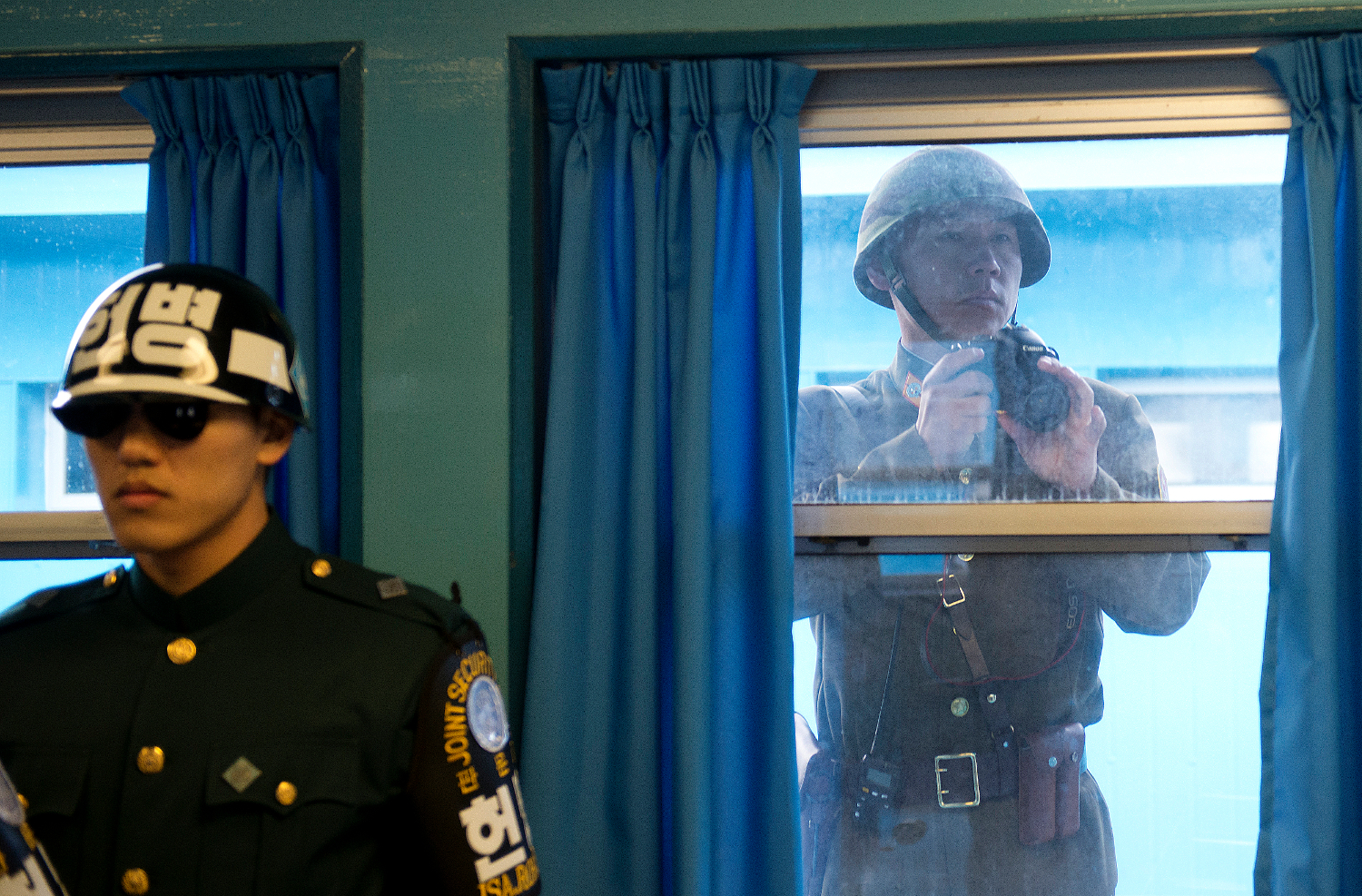 A North Korean Soldier takes photos through the window while U.S. Army Gen Martin E. Dempsey, chairman of the Joint Chiefs of Staff, is briefed at the demilitarized zone in South Korea, Nov. 11, 2012. (DOD photo by D. Myles Cullen/Released)

How the U.S. Could Provoke a New Korean War

The bare bones of a deal with North Korea may exist, but senseless provocations could set off a conflict long before then.
By Geoffrey Fattig | December 11, 2017

In April 2002, about a year before the invasion of Iraq, then-president George W. Bush told a group of assembled reporters that Saddam Hussein had to go. When asked how he would accomplish this, Bush replied cryptically, “Just wait and see.”

I was reminded of this quote when President Trump was asked about North Korea’s test launch of a Hwasong-15 intercontinental ballistic missile, reportedly able to strike anywhere in the United States. Trump’s response was simply, “We’ll handle it.”

Trump’s incendiary rhetoric about “fire and fury” and “totally destroying” North Korea have garnered much of the headlines. But perhaps because his grandest pronouncements — “build the wall,” “repeal and replace,” “lock her up” — have all proven hollow, his subtler comments hinting toward war, such as when he termed a meeting of top generals in October as “the calm before the storm,” seem far more alarming.

The Bare Bones of a Deal

North Korea characterized the Hwasong-15 launch as the “completion of the state nuclear force.” Some analysts have seized on that as evidence that the country will now switch to the second track of the official “byungjin” (parallel development) policy and focus on economic growth, while concurrently becoming more amenable to dialogue with the United States.

This would line up nicely with U.S. Defense Secretary James Mattis’ three preconditions for talks: no further testing, no further development, and no proliferation. (It should be noted that these “three no’s” were originally proposed by the former Los Alamos National Laboratory director Siegfried Hecker following his return from an inspection of the nuclear facility at Yongbyon several years ago.)

If North Korea’s nuclear arsenal truly is “complete,” there would be little incentive for testing or further development, and the country’s leaders would have to be truly crazy to attempt to sell military hardware or technology in the current environment.

On the surface, then, this would seem to be a promising development, especially as Trump could use the opening to claim that it was his strategy of using tough sanctions that forced Kim Jong-un to finally come to the bargaining table. This is the outcome that pundits on both the right and left have been clamoring for, after all.

Yet the question remains: What exactly will the two sides discuss once they begin speaking in earnest? A quick look at the dueling objectives gives little cause for optimism that negotiations will take us any closer to peace.

How a Deal Could Be Derailed

On the U.S. side, a successful negotiation would require ditching denuclearizing North Korea as Washington’s long-standing end goal and being willing to live with the country as a nuclear state.

This is perhaps not as unlikely as it might seem: The administration is reportedly considering a Cold War-style deterrence strategy toward the North.

And given the choice between a devastating war and grudgingly accepting one more nuclear state in the world, the majority of the American public would probably choose the latter. Indeed, it is — unsurprisingly — Trump’s Republican base that is most eager for a war. And given the transfixing hold he’s demonstrated over this portion of the country, the president could easily spin a negotiated settlement with Kim Jong-un as another notch in the win column for America. In such a scenario, he would even be right.

The more important consideration, then, is what would North Korea demand? Or, to put it another way, what is the end goal for the regime?

If the ultimate objective is simply survival, then the U.S. should be able to find common ground with Kim Jong-un and hash out some sort of agreement where he’s allowed to keep his weapons in return for a pledge to adhere to the “three no’s” outlined by Mattis. Of course, Japan and South Korea would likely demand their own nuclear weapons in this case, but given that these countries are already allies under the nuclear umbrella of the U.S., such a change in the status quo should be not be unmanageable.

On the other hand, if nuclear weapons are viewed as a vital component in a North Korean drive to reunify the Korean Peninsula — by means peaceful or otherwise — the situation becomes much more complex and dangerous.

A growing number of experts are coming to the conclusion that the real agenda for the North Korean nuclear program is to threaten the United States into withdrawing its military from the Peninsula. North Korea has already proven more than willing to engage in provocations that have lethal consequences, with the sinking of the Cheonan warship and the shelling of Yeongpyeong Island in 2010 being two of the most prominent examples.

With the protection afforded by a nuclear deterrent, the regime may feel emboldened to raise the stakes, particularly if they perceive that the ongoing sanctions regime and covert actions such as cyberwarfare and the smuggling in of outside information present a real risk of destabilizing the country.

In that case, the United States is going to face an unpalatable choice between either withdrawal or a military response that would risk spiraling into nuclear war.

Of course, a new Korean War could easily kick off before things ever reach that point. On Dec. 4, the U.S. and South Korean air forces began their largest ever joint exercise, a five-day series of drills called Vigilant Ace that involved 230 aircraft and 12,000 U.S. personnel operating from eight military bases in South Korea.

These exercises came less than a month after the U.S. Navy conducted an exercise with three aircraft carriers in the western Pacific Ocean for the first time in a decade, and two months after two U.S. B1-B strategic bombers crossed the Northern Limit Line on a mock bombing run for the first time this century. Clearly, the Trump administration is showing little interest in the “freeze-for-freeze” proposal that the Chinese government has been floating as a first step for negotiations.

A cursory glance at American history shows that the country has mastered of the art of taking actions that simultaneously provoke conflict while allowing the United States to claim the role of the aggrieved party. In 1846, the Mexican-American War started after President James Polk sent the U.S. Army right up to the disputed Texas-Mexico border, then sat back and waited for an incident to occur that would justify a declaration of war. Fifty years later, the Spanish-American War began after the battleship USS Maine blew up under mysterious circumstances in Havana Harbor.

In 1964, an American naval vessel on patrol in the Gulf of Tonkin supposedly came under fire from the North Vietnamese, precipitating President Lyndon Johnson’s request to Congress authorizing U.S. military involvement in Vietnam. And closer to the present day, the U.S. invaded Iraq after the Bush administration manufactured a situation where Saddam Hussein’s only way to avoid a conflict was to turn over weapons of mass destruction that never existed.

When historians look back to the causes of a second Korean War that seems increasingly likely to happen, will the blame lie with North Korea, or the constant barrage of American military exercises taking place on the country’s doorstep? Or will it instead be the result of failed negotiations that had little hope for success in the first place?

One thing is clear: Unless the U.S. is prepared to dramatically alter its security posture in East Asia, the country will bear a heavy responsibility for the inevitable, regardless of who fires the first shot.

Geoffrey Fattig
Geoffrey Fattig was formerly a speechwriter for the U.S. Department of State and is currently the deputy international editor at the Hankyoreh newspaper in Seoul. He holds a master’s degree in International Affairs from UC San Diego’s School of International Relations/Pacific Studies.