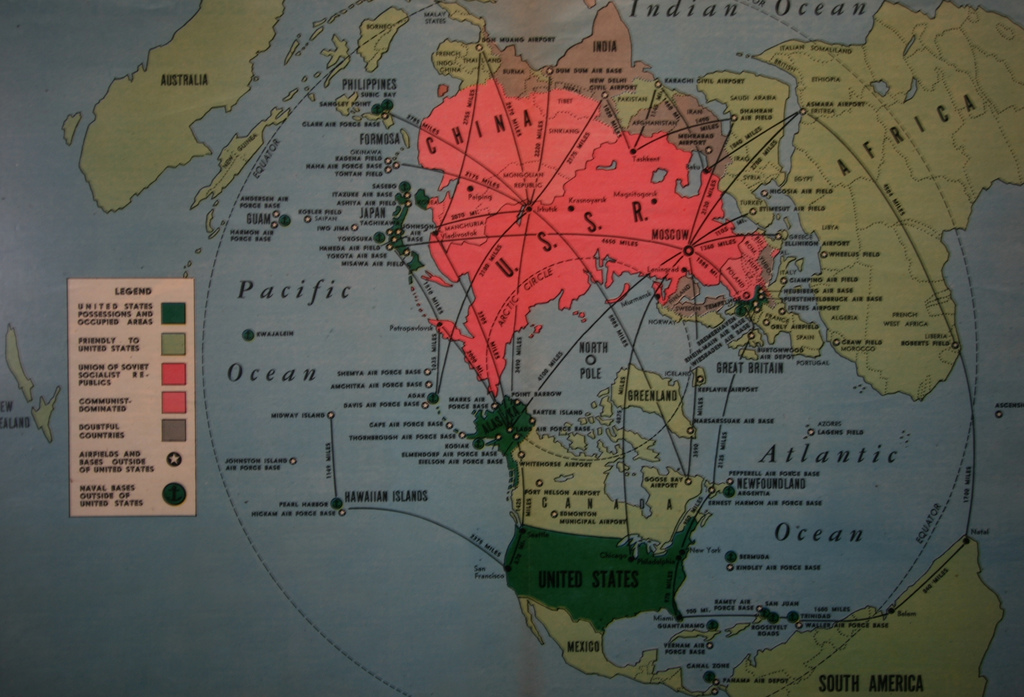 The crisis in Crimea is not just about "losing Ukraine." It would be an even greater catastrophe to “lose Russia” to a new Cold War. (Photo: Jeroen Elfferich / Flickr)

Ukraine: The Clash of Partnerships

Even as we condemn the introduction of Russian troops in Crimea, we have to remember that the Cold War is over—and both sides must act that way.
By John Feffer | March 5, 2014

The Cold War is history. For those growing up today, the Cold War is as distant in time as World War II was for those came of age in the 1970s. In both cases, empires collapsed and maps were redrawn. Repugnant ideologies were laid bare and then laid to rest, though patches of nostalgia persist.

Surely the Cold War has been consigned to the textbooks as irrevocably as the Battle of the Bulge. The Berlin Wall is in pieces. The U.S. president speaks of the abolition of nuclear weapons. The “common European home” from the Atlantic to the Urals—a conceit embraced by such odd bedfellows as De Gaulle and Gorbachev—beckons on the horizon, with the OSCE in place and the European Union creeping ever eastward. Tensions inevitably crop up, but they’re nothing worth exchanging ICBMs over.

What was once confrontation has turned into joint efforts to address global challenges: stabilizing the world economy, negotiating nuclear agreements with Iran, ending the war in Syria. A long article in The New Yorker on a multi-billion dollar nuclear fusion project being constructed in France reminds us that this quest for a sustainable replacement for fossil fuels began as a late Cold War agreement between Moscow and Washington. Impending environmental catastrophe is gradually uniting all sides in much the same way that Ronald Reagan once imagined that a Martian invasion would.

And then there’s Ukraine.

Just when you thought it was safe to get back into geopolitics, the Cold War has reared its ugly head once again. All your favorite characters have returned to the footlights—the iron-fisted Russian leader, the thundering American secretary of state, troops of multiple nations on alert, and lots of cloak-and-dagger intrigue behind the scenes. And starring in the role of Prague 1968 is that new and untested actor: Crimea 2014. We can only hope that history is repeating itself as farce, not as a tragic tale told twice.

But there are some crucial differences in this restaging of the Cold War classic. The West has not been practicing containment of Russia so much as rollback of its influence by expanding NATO and the EU up to the country’s doorstep. And Moscow is not invoking some form of internationalism in support of ideological compatriots but nationalism pure and simple to safeguard its ethnic brethren. Moreover, this is a democratic age: Russian military intervention now comes with the Duma’s imprimatur. From the West, so far, has come much sound and fury, including the threat of economic sanctions and other penalties, but a military response remains off the table. There is still time to find a diplomatic solution that can preserve Ukrainian sovereignty, address the concerns of Russians on both sides of the border, and revive that old vision of a common European home that treats Russia as a member, not a mobster.

When people speak of “Russia’s doorstep,” they mean Ukraine. No one aspires to be a doorstep, because that’s what people walk on with their muddy boots. As Timothy Snyder has detailed in his book Bloodlands, Ukraine has suffered incalculable losses because of its location, first as a locus of potential resistance to Soviet control and then as a battleground during World War II. War pushed the country’s boundaries westward to incorporate what had once been parts of Poland. Changing the map only further emphasized Ukraine’s centrality to the fate of Europe, particularly after the disintegration of the Soviet Union in 1991. The western sections have leaned Europe-ward while large numbers of Russian speakers in the east feel some measure of allegiance to Moscow.

It’s not just language that pulls Ukraine in two directions like the poor baby in King Solomon’s parable. It’s also a question of which collective entity to huddle in for shelter. Ukraine joined Russia and Belarus to create the Commonwealth of Independent States (CIS) in December 1991 as the Soviet Union fell to pieces around them. But Ukraine was also the first CIS member to join NATO’s Partnership for Peace program in 1994. Fifteen years later, Ukraine signed up for the European Union’s Eastern Partnership. Russia has not been happy about either of these partnerships. Moscow put together its own partnership, the Eurasian Economic Community, more than a dozen years ago, but Ukraine is only an observer.

A clash of partnerships is now threatening to break out on the peninsula of Crimea. This semi-autonomous region is the only part of Ukraine with a majority of Russian speakers, and it also hosts Russia’s Black Sea fleet. In Crimea’s 2010 parliamentary elections, Viktor Yanukovych’s Russophone Party of Regions scored a huge victory. But a large population of Crimean Tatars—15 percent of the 2 million people who live on the peninsula—has rallied in support of the new government in Kiev. The sympathies of Crimeans are clearly divided.

And now, it seems, Crimea itself is divided. Armed men stormed the Crimean parliament last week and forced the appointment of Sergei Aksyonov as the new prime minister of the peninsula. Aksyonov immediately appealed to Russia for assistance and set a date for a referendum on Crimean independence. Russian troops have spread throughout the peninsula to secure both civilian and military installations. Russian guards are posted outside Ukrainian military bases. The peninsula is divided between pro-Russian and pro-Ukrainian forces, with Aksyonov already declaring a new Crimean army that he insists Ukrainian soldiers must join. Russian troops conducting exercises at the border recently returned home, and Vladimir Putin has said that his country has no intention of swallowing Crimea. Indeed, absorption might not be his goal, for even the tastiest morsels have a habit of sticking in the throat.

Crimea is not the only challenge to Ukraine’s unity. Kharkiv, located a scant 40 kilometers from the border with Russia, is the country’s second largest city. Earlier in the week, a group of Cossacks seized control of the city hall and hoisted a Russian flag. But the new Ukrainian authorities eventually reestablished control. Places like Crimea and Kharkiv could swing either way in their sympathies. Russian troops plus separatist sentiment could produce an Abkhazian or Transnistrian scenario: breakaway provinces recognized by only a handful of countries around the world. Only compromise—a free-and-fair referendum, the preservation of minority rights, a moratorium on NATO expansion—can prevent fracture.

The continuing crisis in Ukraine has generated its share of Cold War-style inanities. One favorite trope of that period was the “mote in your eye” accusation. Secretary of State John Kerry, who apparently only lives in the present, recently intoned that “you just don’t invade another country on phony pretexts in order to assert your interests.” Then there’s the “if they only had nukes” argument. John Mearsheimer thinks Ukraine shouldn’t have given up its nuclear arsenal back in 1994 because those weapons would have made Russia think twice about sending troops into Crimea. Will the MAD scientists never learn? The situation in Ukraine is bad enough without adding WMD to the mix whether in the form of deliberate attack, accidental use, or loose nukes.

But the chief inanity is the one that has governed Western policy since 1991—that there would be no costs to the expansion of NATO and the European Union. Leaders in Washington and Brussels have been repeatedly warned by those with even just a passing familiarity with Russian history and culture that encroachment in Moscow’s sphere of influence—its “near abroad”—is tantamount to poking the bear. Yes, it’s true that both institutions are responding to genuine interest “on the ground.” But the stakes here are very high. It’s not just about “losing Ukraine.” It would be an even greater catastrophe to “lose Russia.” And here I mean not the Cold War game of winning and losing but the more universal struggle between a liberating order and a debilitating chaos.

Indeed, with the rise of Putin and the freeze that has settled over freedom of expression and assembly, Russia is already being lost by degrees. It can’t be allowed to drift further into the politics of reaction. But the traditional approach to “saving Russia” has been a dual strategy of rolling back its influence externally and funding democracy initiatives within the country. However much I would love to see Ukraine in the European Union one day and however much I support civil society initiatives inside Russia, enthusiasts for these projects must recognize that they strengthen the hands of those who argue the West is only interested in neutering Mother Russia. Backlash is almost inevitable.

Policymakers in Washington and Brussels should take a much longer view. Instead of concentrating on “partnerships” that put Russia beyond the pale, they have to revive a much more encompassing vision of European security. As long as we continue to shave away at the habitat where the bear lives, it will swipe at its encroachers and defend its ground. “Some days you’ll eat the bear,” goes the old Joan Armatrading song, while “some days the bear will eat you.”

It might seem ridiculous to talk about grand partnerships with Russia at the very moment when the international community wants to put Putin in the penalty box. But Russia is much bigger than just Vladimir Putin, despite the man’s penchant for self-aggrandizement. Making a place at the table for this vast country is a chief challenge for the 21st century. So, even as we condemn the introduction of Russian troops in Crimea and decry the narrowing of democratic freedoms in Moscow, we have to remember that the Cold War is over, it should never return, and both sides must act that way.