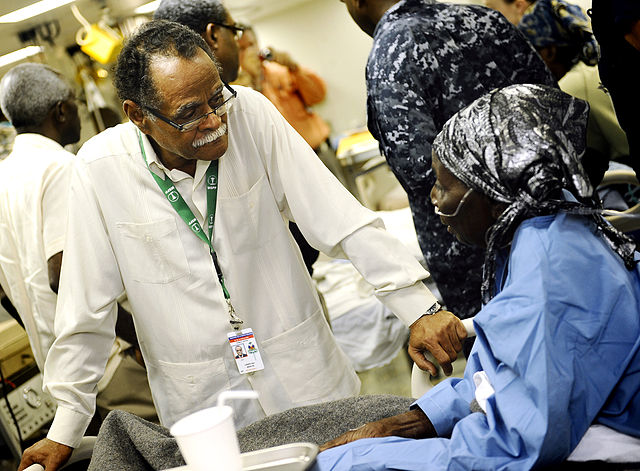 Many more Haitians will die from cholera, a disease brought to their country by the very people who were supposed to be saving them from disaster.
By Nathalie Baptiste | January 30, 2014

Since its independence in 1804, Haiti has suffered from a multitude of ailments—poverty, corruption, instability—common among the developing countries of the world. However, cholera was not one of them. Cholera is an infection of the small intestine that is contracted from drinking water that has been contaminated by human waste. Symptoms include vomiting, diarrhea, and sometimes death.

In October 2010, the first cases of cholera began springing up around the Artibonite River—a life source for thousands of Haitians in the central plateau region—and the first patients began arriving at St. Nicolas Hospital in St. Marc. After rumors begin to spread that UN peacekeepers from Nepal were to blame, Associated Press reporter Jonathan Katz went to the Nepalese base and found that human waste was leaking into the river.

This was no coincidence. The strain of the disease infecting Haitians was identified as the same strain that is endemic to Nepal, while Haiti has not had any recorded evidence of cholera in at least the last century.

In November 2011, the Institute for Democracy and Justice in Haiti (IJDH) filed a petition at the UN headquarters asking for $100,000 for the family members of those killed and $50,000 for those who have been infected. However, in February 2013, a spokesman for UN Secretary General Ban Ki-moon stated that the United Nations could not receive the claims because the organization has legal immunity.

The UN’s immunity means that justice will not be served to the people of Haiti. And this is not simply a matter of bygones. While not accepting any blame for the crisis, the United Nations recently released a report warning that the number of deaths will surge if immediate action is not taken. The United Nations began an appeal to raise $2.2 billion over the course of 10 years to combat cholera in Haiti, but UN Special Envoy Pedro Medrano says that money is needed immediately in order to contain the spread and prevent another outbreak.

It is unlikely that the UN will change its position on accepting responsibility for the matter, and it’s similarly unlikely that enough cash will be raised in order to execute an efficient strategy against the disease. Many more Haitians will die from cholera, a disease brought to their country by the very people who were supposed to be saving them from disaster.

It may be time to rethink the United Nations’ legal immunity.

Nathalie Baptiste is an intern at Foreign Policy in Focus.