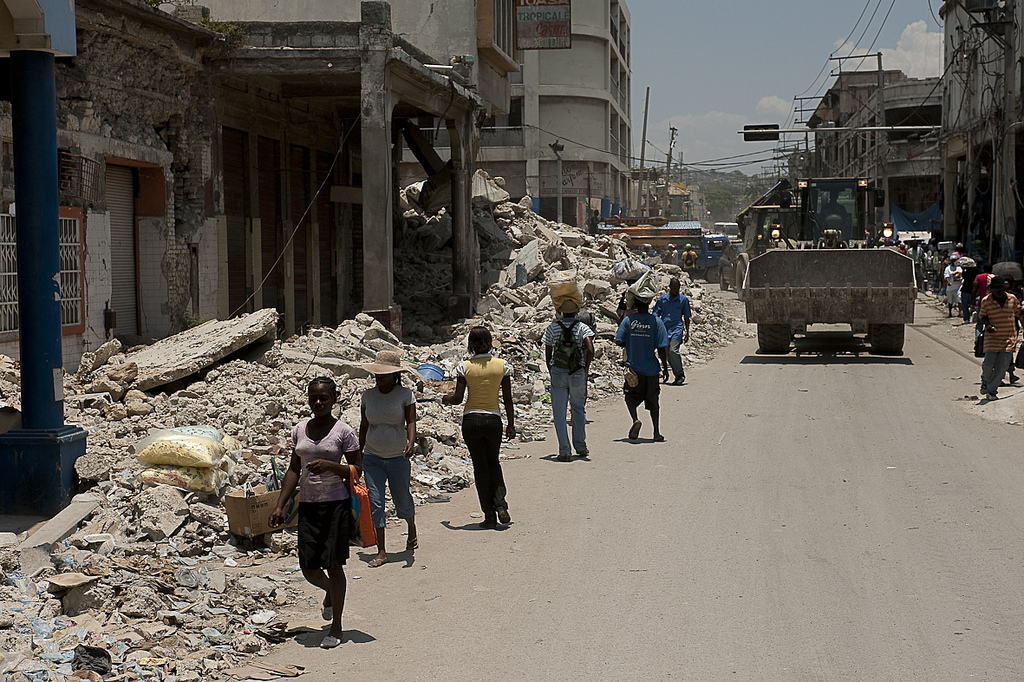 Four years and billions of dollars later, conditions do not appear to have improved for Haitians affected by the earthquake. (Photo: French embassy in Haiti / Flickr)

Haiti: Billions in Aid, Pennies in Progress Since Earthquake

Four years since its devastating earthquake, progress in Haiti is slow and reconstruction efforts are lacking at best.
By Nathalie Baptiste | January 24, 2014

On January 12, 2010 a 7.0-magnitude earthquake rocked Port-au-Prince and the surrounding suburbs for 35 seconds, killing hundreds of thousands of people and displacing approximately 1.5 million. Immediately after news of the earthquake reached global airwaves, an unprecedented amount of money began to pour in from international donors, charities, and various aid organizations. The U.S. government was the biggest contributor, pledging $3.6 billion to the relief and reconstruction effort in Haiti.

But progress in Haiti is slow and reconstruction efforts are lacking at best. It has now been four years since the earthquake and many are asking: how has the money been spent?

The first challenge was to provide shelter for the hundreds of thousands of Haitians made homeless by the earthquake. The United States and other international donors planned for large housing projects to build homes and create jobs in a nation that has been plagued with extremely high unemployment rates for years. USAID initially planned to build 15,000 new homes, but so far has only built 7,515, citing issues with acquiring land titles as one of the main reasons housing projects had to be scaled back.

Subsidy programs haven’t fared much better. In October 2010, Haitian president Michel Martelly, in partnership with the International Organization of Migration and the Haiti Reconstruction Fund (which received funding from USAID), launched the 16/6 plan. This plan intended to close six internally displaced persons (IDP) camps and move families into their own homes in 16 rehabilitated neighborhoods. They would be given $500—which goes a long way in Haiti—in rental assistance or home rebuilding materials.

A survey of 150 families conducted by the Institute for Justice and Democracy in Haiti found that the program was successful in moving families out of the camps. But after the rental assistance plan ended, respondents did not view the program as successful. The problem with funding a rental subsidy program is that it provides a place to live but does not offer any long-term solutions needed to support a family. An alarmingly large number of people reported living in worse conditions than before the earthquake.

To help mitigate Haiti’s crushing unemployment, donors also helped fund a brand new industrial park in Caracol, a small fishing village in northern Haiti that was not affected by the earthquake. Championed by the State Department and the Clinton Bush Haiti Fund, the park—which received $170 million from USAID—is intended to house factories, a power plant, and a port. In order to secure the land, planners evicted hundreds of farmers from their land with promises of cash and jobs.

The park was projected to create 20,000 jobs initially and up to 60,000 in the coming years. As of 2014, however, a mere 3,000 jobs have been created. Moreover, workers’ rights groups have protested the park’s lone tenant, Korean clothing company Sae-A, for mistreating workers at its factory in Guatemala, citing allegations of violence and intimidation against employees. Despite the fact that this industrial park was supposed to bring businesses to Haiti and lift its citizens out of poverty, the clothing manufacturer has already been accused of paying its Haitian employees below the minimum wage.

Four years and billions of dollars later, conditions do not appear to have improved for Haitians affected by the earthquake; in fact, it can be argued that things are worse.

Two major things need to happen in order for the reconstruction effort to be successful. First and foremost, there needs to be more transparency regarding the aid money. This will allow outside groups to call attention to any funds that are being mismanaged.

Second, more of the funds need to be in the hands of Haiti. Reports released from the USAID database show that the majority of the money pledged went to U.S.-based firms and for-profit companies. Of the 1,490 contracts awarded by USAID only 23—less than 1 percent—have been awarded to Haitian firms. This leaves Haitians with hardly any role to play in the rebuilding of their own country,

International donors should be focused on training Haitians in community development, a tool that can help them create jobs and spur economic growth. Once Haitians are equipped with the tools necessary to recover and rebuild, international aid can be used properly and effectively. If the United States continues on its current path, life for Haitians will only continue to get worse.

Nathalie Baptiste is a contributor to Foreign Policy In Focus.