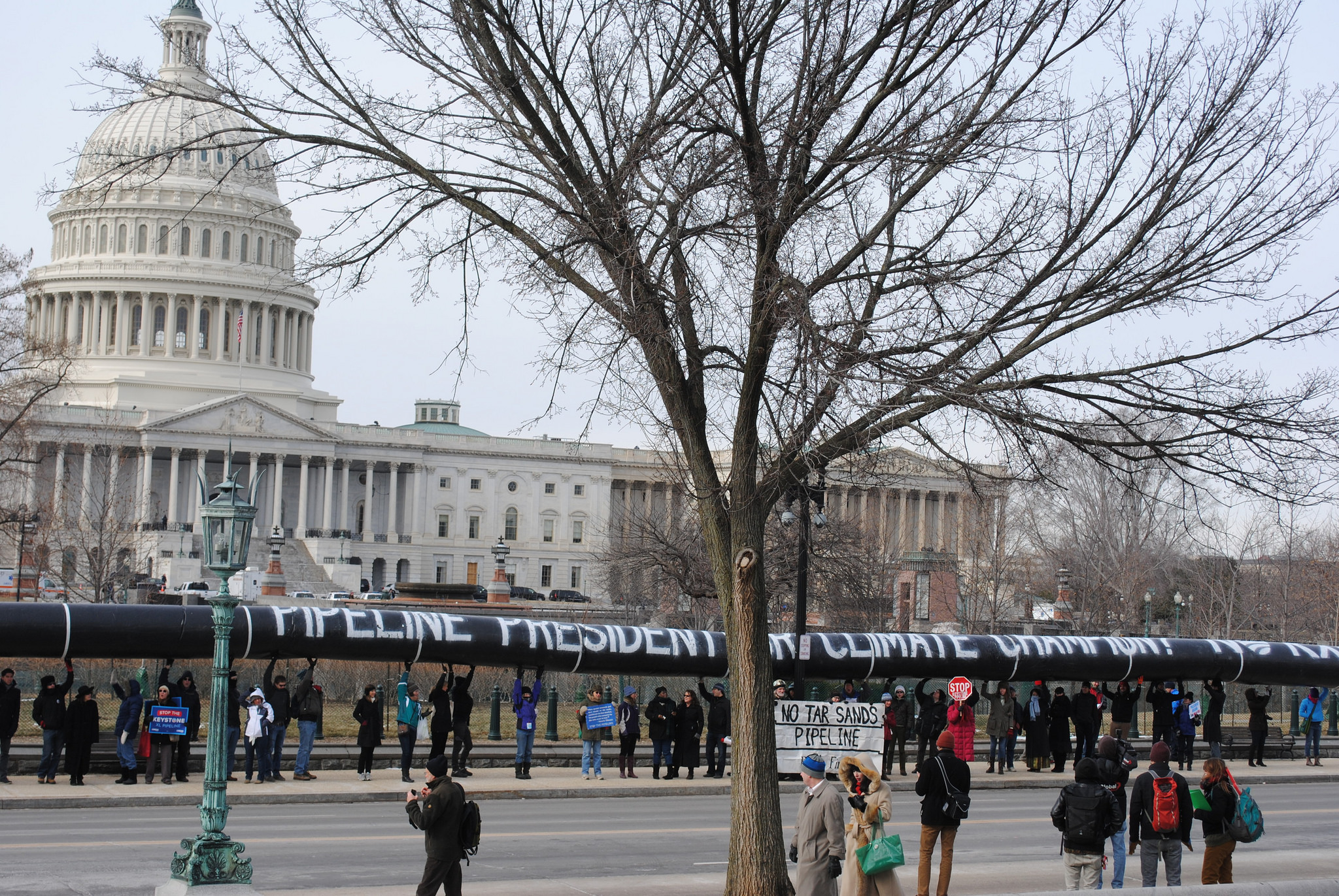 A Canadian oil conglomerate is suing the U.S. over its actions to protect the climate. It’s a small taste of what could come under the TPP.
By Janet Redman | January 15, 2016

A few years back, I was one of the hundreds of climate activists arrested while protesting the Keystone XL pipeline outside the White House. So when the president finally pulled the plug on the project last November, it felt like a huge victory — symbolic, maybe, but definitely worth a trip to the booking station.

In the new global economy, however, no victory is safe. I thought back to Miguel.

I met Miguel Rivera in 2009. He and four fellow activists were being honored with the Institute for Policy Studies’ Letelier-Moffitt human rights award for their leadership in El Salvador’s fight against toxic gold mining. Under massive public pressure, the government had agreed to a five-year moratorium on new gold mining permits and was considering the world’s first permanent ban.

Democracy, it seemed, had worked.

Then the Canadian mining company Pacific Rim, later bought by the Australian conglomerate Oceana Gold, sued El Salvador for more than $300 million for denying permits to dig. Brushing aside concerns that the mining would poison the Lempa River, the country’s primary source of drinking water, Pacific Rim claimed that the government was discriminating against it and was obliged under the Central American Free Trade Agreement (CAFTA) to protect its investments and potential future profits from mining.

A provision in CAFTA known as an “investor-state dispute settlement” clause, now ubiquitous in free trade agreements, allows foreign investors to challenge any national laws and regulations that undercut their ability to make money. Worse still, the fate of these cases is often decided behind closed doors in unaccountable tribunals — like the World Bank’s International Center for the Settlement of Investment Disputes, or ICSID.

While the Pacific Rim case remains unresolved, even the threat of such lawsuits can make governments reluctant to enact meaningful safeguards for public health and the environment. The legal case has dragged on in the courts for years, piling up legal costs and draining energy from the popular movement to safeguard drinking water, food, and crops.

Meanwhile, the suit exacerbated conflicts in El Salvador. Several activists opposed to mining were attacked, including Miguel Rivera’s brother Marcelo, who was kidnapped, tortured, and murdered. Miguel himself has been the target of threats and intimidation.

As extreme as the corporate right to sue sovereign nations for upholding public interests like preventing pollution seems, there’s little talk of investor-state clauses in the United States. That’s probably because we haven’t lost a case yet.

Which brings us back to Keystone.

A Taste of Things to Come

TransCanada, the Canadian firm that wanted to build the pipeline, announced at the start of the new year that it will seek $15 billion in damages under the North American Free Trade Agreement (NAFTA) for being “unjustly deprived” of the value of investments related to the nixed pipeline.

The White House decided just weeks before heading to Paris to sign a global climate pact that the pipeline, which would bisect the heartland carrying 830,000 barrels of oil to Gulf Coast refineries each day, wasn’t consistent with U.S. leadership in the fight against climate change.

The administration was also responding to mounting public criticism of the project from indigenous communities, ranchers, and residents along the pipeline route whose lives and livelihoods were being put at risk. A vibrant national movement grew up around these frontline forces, making citizen opposition to Keystone abundantly clear.

Yet TransCanada claims it had every reason to expect that the project permit would be granted, since similar pipelines have been built before. And as ridiculous as this sounds, tribunals have interpreted international investor protections in some cases to mean that basic public interest protections violate a government’s responsibility to provide a stable and predictable regulatory environment. Like Pacific Rim, TransCanada is suing to recoup the investments they’ve already made — as well as future profits they expected to earn.

NAFTA doesn’t allow TransCanada to overturn Obama’s decision to stop Keystone — though the company is attempting that through a federal case filed in Texas on the grounds that Obama overstepped his constitutional powers. But by allowing corporations to demand massive compensation for a policy decision, the tribunal process could have a chilling effect on future environmental and public health rulemaking. TransCanada has indicated that it’s “prepared for a lengthy process” that could take years and will certainly be expensive.

And if the company wins, it would send a strong signal to the U.S. government not to mess with foreign oil companies’ plans — even within our own borders.

Now an even bigger threat looms on the horizon. The Trans-Pacific Partnership (TPP), a mega-free trade agreement between the U.S. and 11 countries in Asia and the Americas, could come before Congress this year. This agreement would give thousands of corporations in partner countries the right to sue the U.S. government for passing laws to secure climate stability and protect our kids’ futures.

In El Salvador, Miguel Rivera and activists in environmental, faith, youth, and human rights groups continue to risk their lives to defend their families against the ecological ills of gold mining.
Here in the U.S., we should do our part to protect the public from the narrow interests of giant corporations. One important step is to stop the TPP from getting congressional approval. Hopefully the TransCanada lawsuit, by making clear the threat these deals pose to our future, will help galvanize the broad-based public pressure on lawmakers needed to do just that.