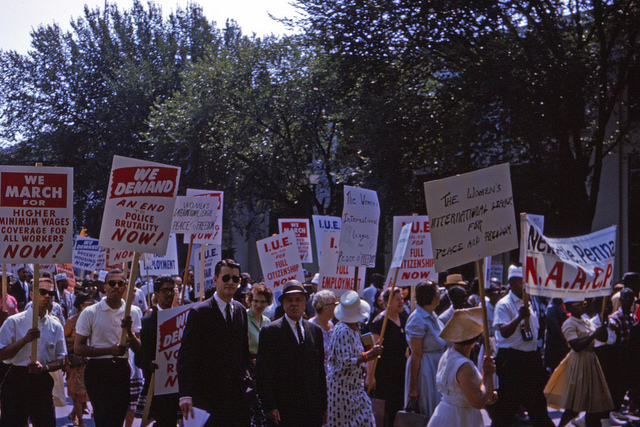 The peace movement has a vital stake in building a movement powerful enough to challenge those who would restrict voting rights or violate civil liberties with racial profiling.
By Judith LeBlanc | August 23, 2013

After Dr. Martin Luther King, Jr.’s historic and heroic 1967 “Beyond Vietnam” speech against the U.S. war in Southeast Asia, he received a barrage of criticism from editorial boards, donors, and even other civil rights leaders.

Ralph Bunche (who in 1950 became the first person of color to receive the Nobel Peace Prize) told the New York Times that King “should realize that his anti-U.S. in Vietnam crusade is bound to alienate many friends and supporters of the civil rights movement and greatly weaken it—an ironic twist for a civil rights leader.”

King’s organization, the Southern Christian Leadership Conference, faced both financial and political repercussions for not “staying in its lane” and just sticking to “civil rights issues.”

Today some have questioned the need for the peace movement to stand up for racial equity. How, they ask, does justice for Trayvon Martin, immigrant rights, or ending racial profiling contribute to changing U.S. foreign policy?

They clearly have a lot to learn from the legacy of Dr. King.

If peace activists can applaud the courage of Dr. King’s linking the “the giant triplets of racism, materialism, and militarism” in 1967, then why do they not see the need to do the same today?

Unfortunately, many in today’s social justice movement have lost sight of the vital links between racial equity, economic justice, and peace.

Just as racism and bigotry are part of a system of maintaining power and privilege, so is a foreign policy premised on the threat of military action and nuclear annihilation.

Racism is not an accident or a happenstance of history, and neither is militarism. It is bound to maintaining the privilege of the 1 percent and is fortified and enforced by what President Eisenhower called the “military-industrial complex.”

The brilliance of Dr. King is that he saw that segregation and racism prop up a system essential to the ability of the rich and powerful to maintain control. He knew that as long as the vast majority of people—what we have come to call the 99 percent—were divided, the rich and powerful would control the direction of government policy, the levers of the economy, and our future.

Peace Action and many in the broader peace movement stood with those who were outraged over the murder of Trayvon Martin, an unarmed teenager killed in Florida. We understand that the policies of the 1 percent seek to divide natural allies in the struggle for a more just and peaceful community and world.

The peace movement has a vital stake in building a movement powerful enough to challenge those who would restrict voting rights or violate civil liberties with racial profiling. Not only because it is morally right—which it is—but because it is a necessity in order to build a much broader and more powerful movement capable of ending militarism and building a new relationship between the United States and the rest of the globe.

This week, on the 50th anniversary of the March on Washington for Jobs, Justice, and Freedom, Peace Action joins with all those who celebrate the legacy of the civil rights movement and the life of Dr. King. And for the organizers of the August 24, 2013 March on Washington, it’s not a commemoration—it’s a continuation. What better time to build on the lessons of the civil rights movement?

The peace movement must help fulfill the dream of Dr. King. Fifty years later the struggle against racism, materialism, and militarism continues. It’s our responsibility to carry on.

Judith Le Blanc is a member of the Caddo Tribe of Oklahoma and the field director for Peace Action. Peace Action is one of the co-sponsors of the 50th Anniversary March on Washington. She can be reached at jleblanc@peace-action.org.