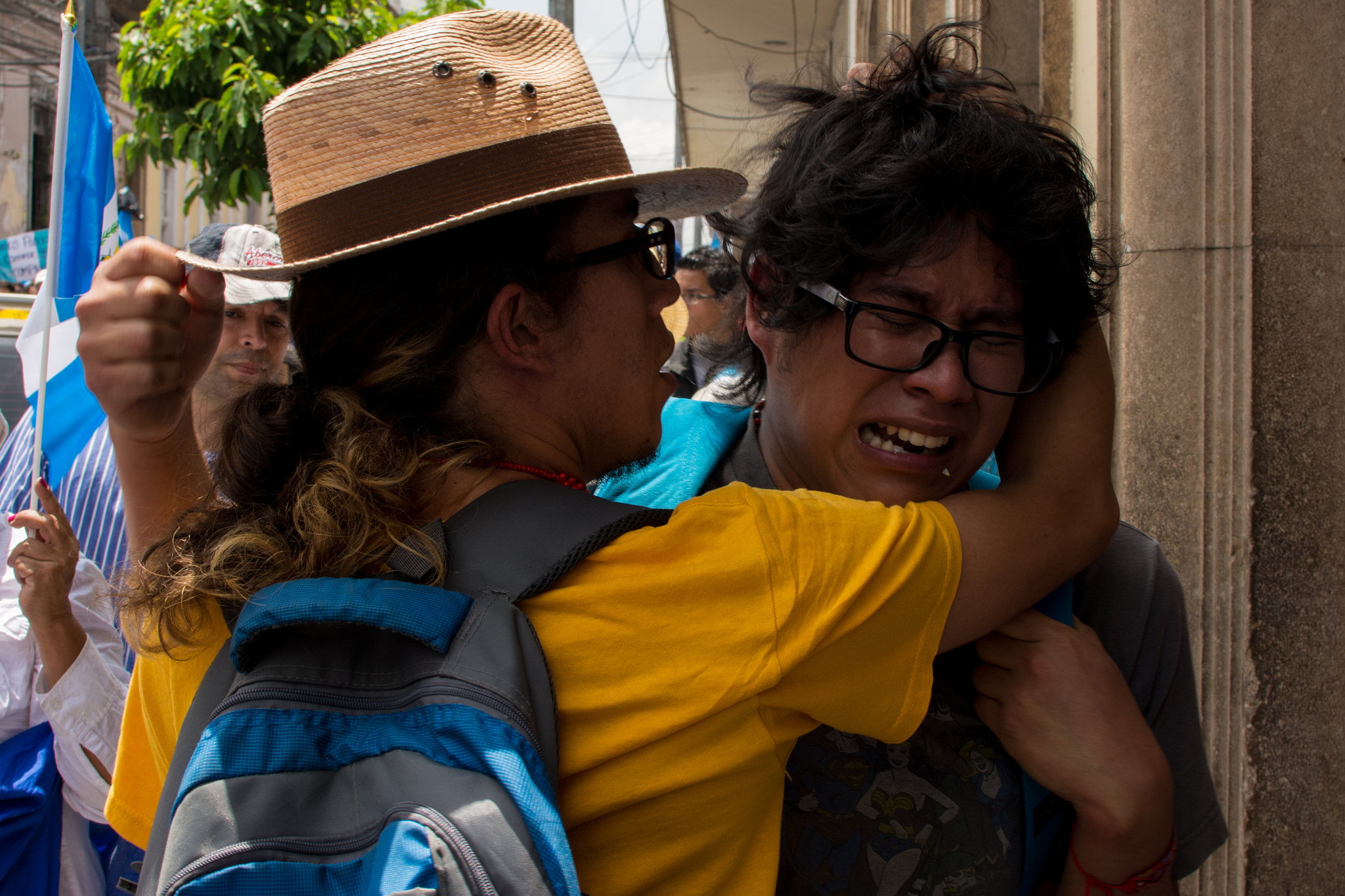 A Military-Backed Comedian Will Be Guatemala’s Next President. Activists Aren’t Laughing.

Amid rising violence against human rights defenders, Guatemalan activists are counting on an emboldened civil society to take on their next president.
By Lindsay Bigda | October 30, 2015

Riding a wave of anti-establishment sentiment, Jimmy Morales — a comedian with no political experience and backed by military hard-liners — has been elected Guatemala’s next president.

Morales saw his popularity surge amid a series of corruption scandals that led to mass citizen protests, the arrest of several high-level government officials, and the resignation of former president Otto Pérez Molina this September. Capitalizing on his reputation as a political outsider, Morales achieved an unexpected first-round win in September before defeating former first lady Sandra Torres in the October 25 runoff election.

Many supporters of Molina’s ouster had supported Torres over the military-backed Morales — albeit reluctantly, since she’d faced past corruption allegations herself.

Morales, like his opponent, promised efforts to promote transparency and root out corruption. But he’s drawn criticism for his vague policies, his comedy act’s reliance on racist, sexist, and homophobic tropes, and the fact that some of his backers — including the founders of his political party, the National Convergence Front (FCN) — are conservative members of the military linked to war crimes from the country’s three-decade civil conflict.

Though some Guatemalans are cautiously optimistic about the future, many remain skeptical that Morales will be able to pull the country out of its current political turmoil. “Nothing is going to change,” one voter said via Twitter — even as she cast her ballot.

Though it was corruption that ultimately felled Pérez Molina, the uprising against him took place amid a broader crackdown on human rights defenders of all stripes — including human rights lawyers, journalists, labor activists, and indigenous groups resisting large-scale development projects.

In Washington, members of Guatemala’s Human Rights Convergence and other civil society organizations recently participated in hearings at the Inter-American Commission on Human Rights and met with U.S. government officials to discuss these challenges.

In back-to-back hearings, petitioners highlighted the defamation and harassment of lawyers and expert witnesses in the ongoing genocide case against former Guatemalan leader Efrain Ríos Montt. Pérez Molina, a former military commander who vociferously denied that any genocide had taken place, was himself implicated in atrocities against indigenous Guatemalans in testimony that emerged during the trial.

In another hearing, lawyers and community leaders emphasized the precarious and vulnerable situation of communities surrounded by African Palm production, where residents suffer harassment from palm oil companies, contamination of their water supply, and other environmental problems.

On September 18, indigenous activist Rigoberto Lima Choc was assassinated outside a local courthouse in the northern town of Sayaxché. Lima was one of the first to publicly denounce the actions of the palm company REPSA for its alleged involvement in the contamination of the La Pasión River.

Many human rights organizations view these attacks as part of an ongoing pattern of repression against land rights defenders, as well as a test for the transitional government — one the administration has failed. They accuse the government of dispatching security forces to protect transnational corporations — and suppress any resistance to corporate misconduct — while failing to properly respond to attacks against community leaders.

In a separate hearing on extractive industries, Commissioner Rose-Marie Antoine called the violence against indigenous activists resisting their own displacement a “total disgrace for democracies in the region.”

In all these cases, the Guatemalan government has categorically denied any responsibility or wrongdoing. “We’re sorry to see that the state maintains its same position,” said Center for Human Rights Legal Action Director Juan Francisco Soto, “even though we now have a new president, and new appointed officials in the country.”

“The People Have Changed”

In the past few months, many Guatemalans have lauded the transformative power of citizen protests, and some outlets called the country a leader in a new “anti-corruption spring.” But failed electoral reforms and ongoing land rights conflicts have prompted some to ask: Has anything really changed in Guatemala?

Responding to that question at a panel discussion in DC, Daniel Pascual from the Committee for Campesino Unity answered: “The people have changed. They have lost their fear of protest.”

Civil society has been armed with new allies, added Pascual, and the country’s “social awakening” has given rise to a more informed and vigilant citizenry. With more people calling for justice, it will be ever more challenging for public officials not to act on behalf of the people.

Still, the vast majority of these urgent concerns — the ongoing militarization of public security, high rates of impunity, deep-rooted corruption, and increased violence against environmental activists, among a collapsing health care system and other issues — are issues President-elect Morales has barely mentioned. To date, he’s shared no plan or inclination to address them.

“Neither Morales nor Torres represent the change we need,” said Iduvina Hernández. “But the social movements we’re experiencing may mean that someday we’ll have different options — candidates who really represent the people.”

Lindsay Bigda is a communications associate for the Guatemala Human Rights Commission.