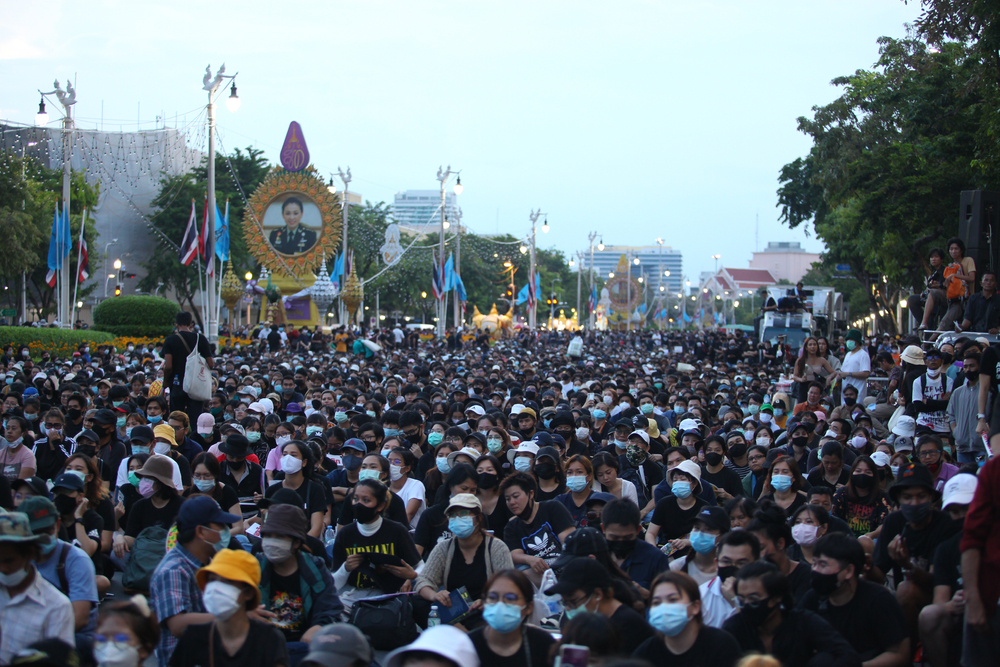 A New Democracy Movement in Thailand

Thailand’s conservative middle classes are now joining populists in a movement against their military-backed system.
By Ureerat Wilson | October 21, 2020

At a time when democracy seems to be on the ropes in many parts of the world, the sight of thousands of people massing against both the military-dominated government and the monarchy in the streets of Bangkok over the last week, in mass defiance of an “emergency decree,” has served as an affirmation that people cannot stand being without self-rule for too long.

Weeks of protests led by youth and students throughout the country have reached a boiling point as they have been joined by many people from the middle classes and from former Prime Minister Thaksin Shinawatra’s lower-class base, the so-called “Red Shirts.” This latest development is significant, since it was the struggle between the Bangkok middle class and Thaksin’s supporters that served as the excuse for the intervention of the Thai military that ousted the elected government of Thaksin’s sister, Yingluck, in May 2014.

A volatile mix of developments has created this surging wave against military rule.

The military’s high-handed moves have been a key ingredient. The generals junked their self-imposed deadline of holding elections about a year and a half after the coup. Then they went on to engineer a constitution that would allow them to handpick the upper house of legislature, the Senate, so that this would veto any legislation that would weaken their hold on power.

After that, the generals held carefully managed elections in March 2019 that were designed to enable them to pack the lower house, the House of Representatives, with their supporters. Finally, before and after the May elections, they had the Constitutional Court dissolve two opposition parties on very flimsy grounds.

A second element has been critical: The military has always said that it has intervened to protect the monarchy. The problem is that the reigning monarch, King Vajiralongkorn, has behaved in ways that contrast with the demeanor of his father, the late King Bhumibol, who enjoyed tremendous moral authority and lived up to ordinary Thais’ expectations of a king.

By contrast, Vajiralongkorn declared himself the personal owner of the Crown Property, worth an estimated $60 billion, which had always seen as public property, and he is seen as flaunting intimate relations with a number of women simultaneously, in contrast to his father, who had a reputation of being monogamous.

Conservative middle-class Thais for whom the monarchy is sacred have increasingly been repelled by what they consider loathsome behavior on the part of the king and become increasingly vocal in their criticism. This reached a crescendo in recent months, when the king preferred to spend almost all of his time with his female entourage in Germany instead of staying in Thailand in solidarity with his subjects as they battled COVID-19.

Back to the Streets

A third factor is generational in nature.

Millions of young Thais have come into political maturity over the last six years, many of them feeling distant from the pro-Thaksin/anti-Thaksin polarity that defined the politics of their elders.

Their emerging as a potent new force was signaled by the surprising third place finish of the Future Forward Party in the 2019 elections. Future Forward, founded by the scion of a multi-millionaire, tapped into the dissatisfaction of youth and students with the status quo, with a program that explicitly called for the military to return to the barracks.

Instead of containing Future Forward through parliamentary means, the military drove its supporters to the streets by getting the Constitutional Court to disqualify a number of its elected representatives, including its founder, Thanathorn Juangroongruangkit, from holding office, and dismantle and ban the party.

Radicalized by these moves, the movement snowballed and produced a new generation of national leaders, some of whom are students at Thammasat University, the fabled home of the student movement of the 1970s. These leaders, including the outspoken 21-year-old female student Panusaya (“Rung”) Sithijaya Wattanakul and 22-year-old political science student Parit (“Penguin”) Chiwarak, have declared their willingness to go to jail for lese majeste, or insulting the monarchy, which has been one of the penalties by which the military previously disarmed the opposition.

After a six-year hiatus, Thais are back battling for control of the streets, this time not against each other but against the police and its military masters.

From 2001 to 2014, the streets and elections were the key sites of struggle as the populist Thaksin unleashed an era of reform designed to loosen the hold on power of the country’s ruling aristocratic-bureaucratic-military elite. Thaksin’s populist program, which included universal health care, agricultural subsidies, and a one-million-baht investment fund for every village, endeared him to the lower classes in the countryside and the city. A military coup in 2006 ousted Thaksin but it did not stop his coalition from winning four straight elections, the last of which brought his sister Yingluck to power in 2011.

Thaksin’s cultivation of support of the lower classes alarmed Bangkok’s middle classes, who felt it was being done at their expense. Sensing an opportunity, the elite fanned the fears of the middle class and mobilized them in massive street protests, which were met with equally massive counter-protests by Thaksin’s Redshirts. Fearing that succeeding free elections would install a permanent pro-Thaksin majority, the elite-middle class alliance finally opted for a strategy of provoking the military to oust Yingluck, Thaksin’s stand-in, in May 2014.

The generals’ refusal to step down after over six years has weakened their support among the middle classes, with many former supporters of the 2014 coup now joining the students and youth, along with their former antagonists, the Redshirts.

But the new anti-military coalition is not without its problems. Some would like the military to go back to the barracks, but they are worried about the students’ other demand for a reform of the monarchy. More conservative protesters worry that the Thai people are not ready for this demand, which has drawn enthusiastic support even from high school students, many of whom don’t understand why they have to have a king in the first place.

Thailand’s Future in the Balance

With thousands prepared to keep defying the military, many are worried that the military and police will sooner or later take drastic measures against the protesters to keep their authority from eroding.

To disperse last Friday’s mobilization, the police — obviously taking a leaf from the Hong Kong police — are said to have doused protesters with water mixed with indelible ink so they could be identified and arrested. Police tactics are expected to escalate. There are also fears that the two crack army divisions stationed in Bangkok that are under the personal control of the king might move independently of the government and take control of the streets.

There is a sense that things are coming to a head, that the fate of the country hangs in the balance.

Ureerat Wilson is a correspondent for a progressive online newspaper based in Bangkok.