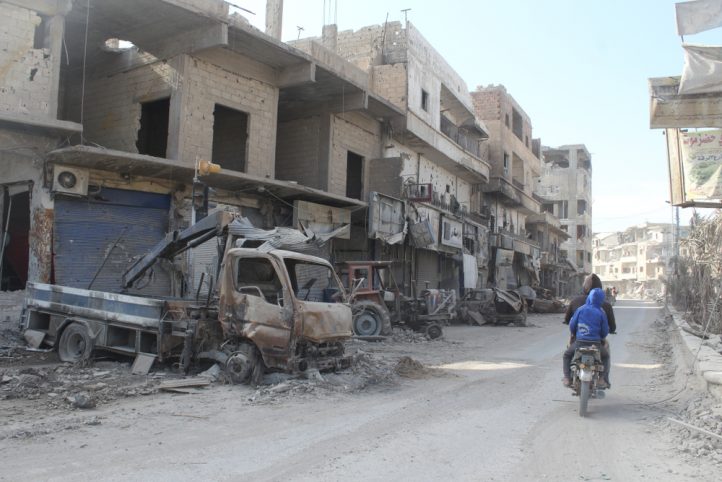 Raqqa in 2017 (Tomas Davidov via Shutterstock)

Things are changing in Syria.

The Syrian government has won the war. Refugees are beginning to return. The creation of a constitutional committee will bring peace to Syria. Syria is safe.

Some of these statements are true, some are exaggerated, and others may never become real.

What all these statements have in common is the desire for a signal that the war is over, that the world can finally move on from the devastating and brutal violence that has marked the lives of millions of Syrians for the past eight years. Although active hostilities have decreased, very little progress has been made on the underlying causes of the conflict, many of which lie in massive and systematic human rights abuses.

Over the past year, human rights organizations documented how the Syrian-Russian military alliance has retaken population centers held by major anti-government forces following attacks that involved indiscriminate airstrikes and prohibited weapons. There was a huge diplomatic and humanitarian effort to protect civilians and prevent massive displacement in Idlib, which should remain an immediate priority. And Raqqa, which had been the headquarters of the Islamic State, is attempting to recover from the devastating impact of the U.S.-led coalition’s battle to retake it.

Airstrikes and chemical weapons, one hopes, will no longer be the daily fare of future violations in Syria. But as this year has shown, human rights violations in Syria are far from over. The government keeps using laws and policies that unlawfully confiscate and destroy the property of residents of previously anti-government areas. Hay’et Tahrir al-Sham—the non-state group in control of Idlib—has arrested and tortured dozens of people to maintain control of the region. The fate of tens of thousands of people detained by the Syrian government remains unknown. The US-led coalition and its allies on the ground are failing to adequately investigate and compensate victims of unlawful airstrikes and to deal with the thousands of foreigners who travelled to join or live under the Islamic State in a manner that ensures accountability for any crimes committed while respecting due process rights of the suspects.

With a new UN Syrian envoy soon to be in place, and an apparently strong international desire to end the war, here are three essential elements of a workable post-war Syria:

First, ensure that refugees and all other displaced Syrians have a home to return to. There are six million Syrian refugees, and five million more people displaced internally. Many say they want to return to their homes but fear that they will find that their property has been seized or demolished or that they will not be allowed in. These fears are real, with the Syrian government passing laws and carrying out policies to unlawfully appropriate houses, destroy these dwellings, or restrict access to them. Non-state actors have also confiscated houses in areas they control, particularly in Afrin, where Turkey-backed groups took control back in March.

European policymakers are well-placed to engage the Russian government to ensure that civilians who choose to return are protected from retaliation. And they should insist that the Syrian government ends unlawful property demolitions and seizures, as well as arbitrary restrictions on access, and that it adequately compensates residents whose property has been unlawfully destroyed.

Second, the Syrian government and others need to reveal what happened to the disappeared. The Syrian government, the Islamic State, and other groups have forcibly disappeared or detained tens of thousands of people. It is an open wound for any society trying to move forward, as families struggle to find answers about their loved ones. Hundreds of people live in fear that one day, the abusive state—and non-state—apparatus will find them.

Although Russia, Turkey, and Iran have created a working group on detainees as part of the Astana process, very little progress has been made. Issuing death certificates and conducting a limited prisoner exchange is not enough. Everyone should insist that all parties to the conflict allow international monitors into detention facilities, release all wrongfully held prisoners, and disclose the fates of those disappeared or kidnapped.

Finally, there needs to be progress on justice. The Syrian conflict is one of the most well-documented in history, with war crimes ranging from systematic and widespread torture and detention by the Syrian security services to the government impeding humanitarian aid from reaching starving civilians and the consistent use of indiscriminate and prohibited weapons by the Syrian-Russian military alliance. Many of the systems that allowed these crimes to happen are still operational and intact, including in the humanitarian aid, security, and justice systems. There is a risk that some crimes against humanity will continue after the conflict.

Justice means not only punishing those responsible for past atrocities but also ensuring that these violations aren’t repeated. Countries and donors looking to engage on Syria, as well as the UN special envoy and allies of the Syrian government, should insist on vetting and reforming the Syrian state apparatus, particularly the security and justice systems, to respect the rights of Syrian citizens. If the Syrian justice system is not capable of providing independent and effective prosecutions for war crimes and crimes against humanity, justice systems in the rest of the world need to be ready and willing to prosecute these crimes.

None of these efforts will be easy to accomplish. But if the aim is to see a peaceful and prosperous Syria, then they are essential.

Sara Kayyali is the Syria researcher at Human Rights Watch.