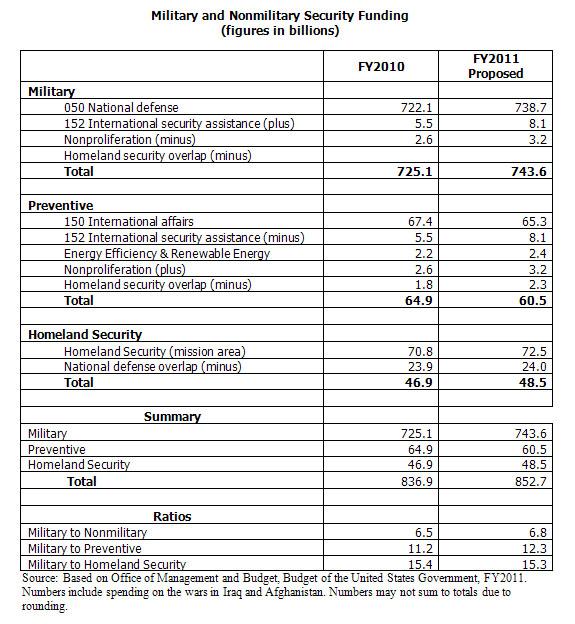 A Military Budget of Add-ons, Not Choices, Makes the Security Imbalance Worse

An emphasis on non-military engagement can't hide the fact that Obama is spending more on defense than Bush.
By Anita Dancs, Miriam Pemberton | February 1, 2010

By exempting not just military spending, but also non-military international engagement and homeland security from his proposed spending freeze, the president has sent an important message: Strengthening non-military tools is essential to U.S. security.

This can’t obscure the fact that in his budget the military tools are, shall we say, more equal than the others. At $744 billion, the military budget continues its upward trajectory. It also widens the gap between spending on military vs. non-military tools. Spending on non-military international engagement actually decreased since last year, from $64.9 to $60.5 billion.

Secretary of Defense Robert Gates himself has said repeatedly that the extreme imbalance between what’s spent on military and non-military foreign engagement isn’t in our best interests. The budget released today actually makes this situation worse, and the Defense Department’s budget is primarily responsible.

Indeed, Gates’ department plans to spend about 5 percent more, in real terms, than the Bush administration did.

A year ago, Chief of Staff Rahm Emanuel cited the GAO estimate of $300 billion in accumulated waste on the Pentagon contracts that taxpayers are currently paying for. Now all of that waste is vital to national security and untouchable?

Unlike last year, this budget makes no cuts to major weapons systems. It’s a budget of add-ons rather than choices.

House Speaker Nancy Pelosi has said that if we are looking for savings, military spending should be on the table with the rest of the budget. She’s right. As the largest component of the discretionary budget — one that has nearly doubled in real terms since 1998 and nearly equals what the rest of the world spends on its militaries in total — it should head the list.

Anita Dancs, Miriam PembertonMiriam Pemberton is a research fellow at the Institute for Policy Studies. Anita Dancs is an assistant professor of economics at Western New England College. They serve on the task force that produces the annual “Unified Security Budget of the United States.”