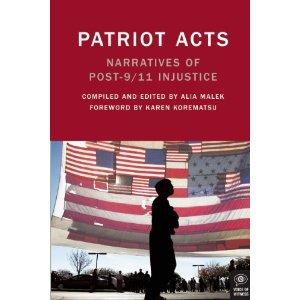 A Visit from the FBI

In this excerpt from a new book of narratives about men and women needlessly swept up in the War on Terror, the FBI inadvertently reveals the scope of its surveillance.
By Yasir Aladdin Afifi | July 21, 2011

This August, Voice of Witness will release Patriot Acts: Narratives of Post-9/11 Injustice, edited by Alia Malek, an author (A Country Called Amreeka) and former Department of Justice attorney. A collection of oral histories, Patriot Acts tells the stories of men and women who have been needlessly swept up in the War on Terror. In their own words, narrators recount personal experiences of the post-9/11 backlash that have deeply altered their lives and communities. For more information on the book, visit Voice of Witness.

In this excerpt of oral history, edited by Alia Malek, Yasir Aladdin Afifi describes how he discovered that he was enmeshed in the FBI’s web of surveillance.

In October 2010, I took my car to my mechanic in Santa Clara for an oil change. As the mechanic was elevating the car on the hydraulic lift, I noticed that there was something like a piece of string or wire coming out from the back. Then, when the car was fully elevated, I noticed this black device under the back of the car. I asked the mechanic to pull it out, and he handed it to me. He was somewhat freaked out.

There was a big, black rod attached to something that looked like a walkie-talkie. I wasn’t freaked out because I had an idea of what it was— it looked like a tracking device! I didn’t think it was normal at all, and I had a feeling it was the FBI who’d put it there.

But in the end I didn’t think it’d be a great idea to sell it. I wasn’t going to do anything with it until a lawyer told me what I should do. As my friends and I were Googling the information, my friend posted a blog about it on Reddit, the social network site. He posted this comment: “Me and my friend went to the mechanic today and we found this on his car. I am pretty confident it is a tracking device by the FBI but my friend’s roommates think it is a bomb. Any thoughts?”

Within two or three hours we’d made the front page on Reddit and received maybe 3,500 comments. We even started getting calls from the ACLU. A lot of people wanted to talk about this. Most of them were just random people giving opinions, but one person actually found out what exactly this device was—its real name, its authentic cost, who it is and isn’t supposed to be sold to.

Family and friends told me to just live my life normally, to not do anything differently. They said, “You’re going to school and you’re working. You’re a perfectly normal person who happened to find a tracking device on your car. Just relax.”

And that’s what I did.

Until now I don’t know exactly why the device looked so rudimentary and unsophisticated, but I can only guess that maybe I’m not a priority on their list. I think the FBI are as smart as they get, and if they didn’t want me to find the tracking device, I probably would have never found it. Maybe they were just trying to scare me or somebody else, if not the whole community.

Two days after I found the device, the FBI showed up near my house.

That day, I came home from work at around five o’clock. One of my friends and my roommate were in the living room, just chilling, watching TV. My roommate said to me, “There are two people standing next to your car.”

I had somewhere I had to go anyway, so I changed my clothes and walked out to my car. There was a man and a woman standing at the back of my car, to the right of it. They were standing exactly where the device had been.

They just stood there and played stupid.

Right when I opened the car door, the man said, “Hey, did you know your tags are expired?”

I replied, “Yes, I know that. Does that bother you?”

He just laughed it off and looked the other way, so I got into my car and started the ignition. As I started leaving the complex, I saw two brown, unmarked SUVs pull in. They turned around, pulled a U-turn, waited, and then followed me for about ten seconds.

When I got into the street they started flashing their lights, so I pulled over. Then I realized there were three cars: one small and black, a Caprice, I believe, and the two brown SUVs. The man and woman from before were in the black Caprice. I was feeling pretty intimidated.

A police officer wearing an FBI vest came up to my window and said, “Did you know your tags are expired?”

After I showed him my license, registration and insurance, he asked me to come out of the vehicle and speak to the man and woman from the Caprice, who were standing beside him. The man showed me his FBI badge. His name was Vincent, and the woman was called Jennifer.

Vincent asked me, “Do you know why we are here?”

I said, “No, but I have an idea. Would you mind telling me why you are here?”

Then he asked, “Were you at a mechanic’s shop last Sunday?”

“Where is the device that you found under the car?”

I asked, “Are you the person who put it there?”

He said, “We need that device back right now.”

I replied, “Do you have a search warrant or anything proving that this is your device?”

Then Vincent got a little frustrated, and he said, “Yeah I can get you a search warrant. I’ll get it for you within an hour.”

I asked him, “Why didn’t you bring it with you just now?”

And then Jennifer started coming into the conversation with a real soft tone, and she was very charming, very sweet. She told me, “You know, we’re just trying to help you. We need this device back and then we’ll leave you alone. It would be helpful if you cooperated.”

I said, “I am cooperating with you. And I don’t mind answering any of your questions.”

I just felt like Vincent was much more intimidating, and she was the nice one, you know, really sweet and everything. She said, “What happened to the device? Did you do anything to it? Did you lose it?”

“Nothing happened to the device,” I said. I told them I’d thought about selling it. I think they thought it was funny. Then they asked me for the device a couple more times, and finally I told them, “I don’t mind giving it to you. It’s in my living room. Follow me.”

I walked them back to my house. Vincent, Jennifer, and four cops waited for me directly outside my door. As I opened the door to my house, Vincent was about to step inside my living room, but I asked him to stay outside while I got the device. He said, “Sure.”

So I went in and picked up the device, and then I handed it to Vincent.

I said, “Is this what you wanted?”

He said “Yes! This is what we needed.”

“And is there anything else I can help you with?”

“Yes, we’d love to just, if you don’t mind, ask you a couple of questions.”

I told him I’d be more than happy to answer all of his questions. I hadn’t spoken to my lawyer, but at the same time, it didn’t make any sense for me not to answer their questions. I knew that I wasn’t doing anything wrong, so I didn’t want them to say, “Why are you avoiding our questions?”

The seven of us walked around the complex as Vincent and Jennifer asked me questions. I was confident in what I was doing, so I felt no pressure. What I expected was what happened; the questions were pretty simple. Vincent asked me, “Have you ever been to Yemen, for any type of training? Do you know anybody there?”

“Never been to Yemen,” I replied. “I’ve only been to Egypt and Dubai.”

Then he asked me if I had ever been to Syria or Iran, and if I’d ever been in any type of training. I told him no.

After we’d been walking for about a couple minutes, the four cops walked back to their car. It was just me, Vincent, and Jennifer, so I tried finding out why they were here by asking them some simple questions myself. The more I asked, the more I understood from Jennifer how much

she knew about my personal life. She told me things like, “I like your taste. I like these restaurants that you’re going to,” and “We know that you’re flying to Dubai in two weeks.”

She also knew that I was looking for a new job. The only way she could have known all this was either through my phone or email. So, I was 100 percent sure they didn’t only have a tracking device under my car—they also had my phone and email tapped.

Jennifer could speak Arabic, but I couldn’t get her to talk too much in the language. I was trying to figure out where she was from, trying to find out more information about them, but hers wasn’t an accent that I could identify, and I can pick up accents anywhere. For the past two years, my job every day has been to talk to Arabic business owners across the world, all of whom have different dialects. All I can say is that Jennifer’s was just clear Arabic, clear enough for me to understand that she wasn’t Arab. She said she was Lebanese, but I didn’t really buy that.

It ended with them telling me, “We appreciate your cooperation. You’ve been great. Sorry to bother you; you’re boring. No need to call your lawyer.”

I thought by “boring” they meant that I wasn’t too significant or important to them. Nonetheless, as they left, I thought, Let me call my lawyer right now and find out what she thinks of all this.

I think the FBI are probably still watching me. I have no idea if they’ll put another device under my car, but after that visit I did change my phone number. I just hope I never have to get another call from them. The total invasion of my privacy bothers me. Two people, or maybe more than two people, know my whereabouts every day. They know what I’m doing, who I’m talking to. I understand that, as an American citizen, you’re not supposed to be subjected to that. You’re not supposed to invade another person’s privacy.

I hope people my age, or Muslim-American youth, can use me as an example to understand what their rights are and how to assert them, to be confident in what they are doing as long as it’s not anything wrong, and to never be intimidated by any federal agency.