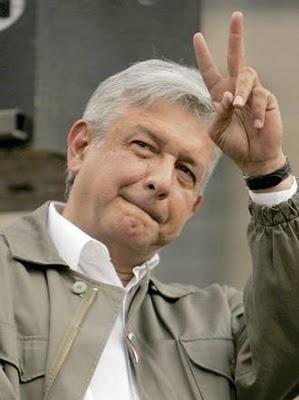 A Way Out of Mexico’s Morass

A Mexican politician is taking his call for a more balanced U.S.-Mexican relationship straight to Washington.
By Tania Arroyo | October 26, 2011 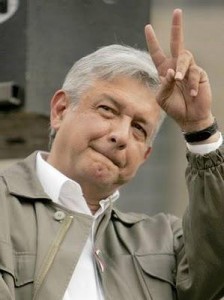 Rethinking Mexico’s relationship with the United States is an urgent priority, according to leading Mexican politician Andrés Manuel López Obrador. In his October 11 remarks at Washington, DC’s Wilson Center, López Obrador declared that it “is more effective and humane to implement cooperation in order to reach development, rather than insisting on giving priority to police and military cooperation, as we do now” — strongly implying that there is nothing cooperative about U.S. assistance for Mexico’s drug war.

López Obrador, a former Mexico City mayor, spoke on behalf of Mexico’s National Regeneration Movement (MORENA), a progressive grassroots political organization that many believe could play a role in the country’s presidential election next year.

This visit was part of an international tour that the leader started in Chicago and has taken all the way to Spain in order to spread the message of MORENA beyond Mexico’s borders. Here in the United States, López Obrador is not just trying to reach Mexican immigrants or other potential electoral supporters, but also to dialogue with the United States. This was precisely the intention of his presentation at the Woodrow Wilson International Center, a foreign policy bastion of official Washington.

López Obrador, who represented the center-left Party of the Democratic Revolution (PRD) in the hotly contested 2006 presidential election, called for stepped-up efforts to address poverty and other structural shortcomings. Presenting himself solely as an emissary for MORENA and its designs for the U.S.-Mexican relationship, he said, “I am here as a representative of the National Regeneration Movement, MORENA. I come not as a candidate or as a pre-candidate for the presidency.”

What Does MORENA Mean?

MORENA – a word that also refers to a dark-skinned person in Spanish – is just one among many social movements that have emerged in the country during the past 11 years of PAN (National Action Party) rule. But it seems to be the only one with political ambitions. Since its creation after the disputed 2006 Mexican elections, the movement has been doing grassroots work. “We have worked to organize the people,” López Obrador told a largely Mexican-American audience in Chicago. “Municipalities where you were born, I have been there. I have visited all the 2,038 municipalities of Mexico, all of them. I also have visited the 418 indigenous municipalities founded on community habits and customs in Oaxaca, listening to the people’s concerns.”

According to La Jornada, a Mexican newspaper, MORENA has convened nearly 38,000 committees involving 180,000 citizens from all over the country. On October 2 – when Mexicans commemorate the1968 massacre in Tlatelolco – the social movement became an official civil association, which means that MORENA will have a national representative body and a national executive committee, as well as state, district, and sectional committees.

Its composition does not include party leaders, but instead prominent Mexican academics, intellectuals, and social leaders like Elena Poniatowska and Rafael Segovia. This movement has been defined by López Obrador “as an open, plural, broad, and inclusive movement, involving free men and women from all sectors of society.” By that he means indigenous people, peasants, workers, professionals, independent workers, artisans, teachers, artists, writers, students, intellectuals, entrepreneurs, small and medium businesspeople, and partisans as well as independents, all of them struggling for the transformation of Mexico and its institutions.

This gives us an idea of the magnitude of MORENA’s appeal. However, these facts have not merited mention in the national or international media. For many people here in United States, López Obrador’s speech at the Wilson Center was the first time they had the opportunity to hear about MORENA.

Washington should keep López Obrador and MORENA in mind when talking about the future of Mexico and its relationship with the United States, particularly with respect to the war on drugs and migration issues. As Obrador said, “In recent years, bilateral cooperation has focused more on security, leaving unattended what caused the problems of violence and the increasing migration of Mexicans to the United States.”

Regardless of whether López Obrador reaches the presidency in 2012, MORENA will continue to be a social force of pressure against the climate of violence and uncertainty that prevails in Mexico today. Together with other mass movements, from the Caravan for Peace and Justice led by Javier Sicilia to the Zapatistas in Chiapas, MORENA could lead the country into popular uprising if the Mexican government continues to brush aside the perspectives of drug war victims.

“It is not with military assistance or intelligence work, helicopters or weapon shipments that we will remedy the insecurity and violence problem in our country,” said Obrador. He advocates instead a return to the “good neighbor policy” first proposed by U.S. President Franklin D. Roosevelt, which is based on a true partnership for development.

This would be a welcome change. Of the $478 million that the United States gives Mexico every year, $450 million is for the Merida Initiative.

MORENA’s project proposes that Washington turn around the U.S.-Mexico relationship by guiding efforts to reactivate the Mexican economy, thus providing for the employment and welfare of Mexicans.

According to López Obrador, it is vital to incorporate young people back into Mexican society by giving them jobs and schools to continue their studies. “It was very irresponsible, what has been done with this neoliberal policy on education,” he said. “Three hundred thousand young people are rejected each year from higher education, and are largely pushed into anti-social behaviors.”

For MORENA, education and jobs are the key to isolating the drug cartels. The movement aims to promote endogenous development, including the recovery of the agricultural sector and the promotion of food sovereignty. The plan calls for the reforestation of the south to promote job creation and remove a major reason for migration. It seeks to reinvigorate the development and integration of the energy sector, including making electricity more available and providing fuel subsidies to boost small and medium enterprises. The plan also calls for an economic and commercial corridor in the south of Mexico stretching from Salina Cruz to Coatzacoalcos – to be developed with involvement of the private, public, and social sectors – that would benefit Mexico and its trade with Europe and United States. Coloring MORENA’s program throughout are the notions that monopolies must be fought, education must be provided, and cultures must be protected.

MORENA and López Obrador contend that these actions would be more effective than current approaches for reducing violence and migration to the United States. Few people, outside President Felipe Calderon, would disagree, considering that most of the 50,000 victims claimed by this war on drugs have been young people who felt forced into criminal activities for the lack of other opportunities. Calderon, however, has said that Obrador “likes his fans, he likes super radical people, but does not like the average Mexican who works.” He insisted, “it would have been catastrophic for Mexico to be governed by revenge and anger,” reiterating a talking point from Calderon’s 2006 campaign that suggested Obrador was a danger to Mexico.

In response to these accusations, also recurrent in the mainstream media, López Obrador said that MORENA seeks justice, not revenge. “We want to inaugurate a new era in our country,” he said. “We are not driven by resentment or hatred. We want to get Mexico out of this impasse. We want to look ahead and create different conditions, to lead by example, to seek consensus. There will be not persecution when our movement succeeds.”

People here in the United States and in Mexico are tired of weapons, tired of violence, and sick of a discourse that promotes fear and hopelessness. New and innovative solutions that bring more effective and concrete results for both the United States and Mexico — countries intrinsically linked by a border of 2,000 miles and a shared cultural and social history— have to be created.

MORENA is a glimmer of hope for what the great Mexican journalist Miguel Ángel Granados Chapa, who passed away this month, wrote in his final column: “It is desirable to boost the spirit of music, arts, sciences and other ways to make life reborn, allow our country to escape the rot, which is not inexorable fate. I know it’s a childish desire, naive, but I believe in it because I have seen this mutation realized. This is the last time we meet. With this conviction, I say goodbye.”